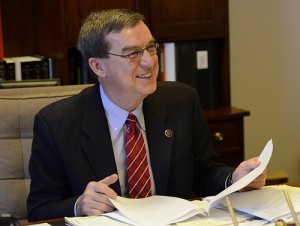 Unleashing a political firestorm, Sen. Phil Puckett (D-Tazewell) has resigned his seat in the Virginia Senate, effective tomorrow. The move means that Democrats lose their majority in that chamber, leaving (temporarily at least) a 20-19 GOP majority.

It is unclear what this will mean for Medicaid expansion and the budget, as pro-Medicaid forces in the Senate include three Republicans. But, what is clear is that Republicans think they can pick up Puckett’s southwest Virginia seat when a special election is held, making the majority shift permanent.

That would explain the apparent deal General Assembly Republicans made to entice Puckett to resign. You see, Puckett’s daughter wanted to be a judge, but that’s counter to established tradition that no judicial appointments are made for relatives of sitting legislators. Puckett wanted to allow his daughter to get that job, but he didn’t want to lose his own job to make it happen. So, Republicans promised the conservative Democrat a seat on the state’s tobacco commission instead. Laura Vozzella at the WaPo has more.

We’ve heard some names floated as potential GOP nominees in the upcoming special election, but have not confirmed those reports. We will pass along info as we receive it.

UPDATE – 9:25 PM: Although the Senate GOP Caucus is involved here, we are told that the House members have been driving the bus on this deal. The timing is suspect, of course, given the pressure the new GOP majority in the Senate will have to pass a “clean” budget, but our source close to the House GOP indicates that timing is coincidental, and that Puckett’s deal had more to do with the ambition of his potential successor (Del. Ben Chafin) than with Medicaid expansion or the budget.

[…] sure have moved fast since news broke of Puckett’s departure from the Senate. There were quick denunciations and accusations of felony crimes against those connected with the […]

Well thank goodness no one tweeted about it before it was a done deal!

Wow, what an unexpected surprise!

It is absolutely hilarious how the faux Conservative’s in this blog blindly, rapidly, completely, and utterly embrace corruption. Then you cry like babies when EC easily has his was with you.

I suspect it will be a cold day in hell before any daughter is appointed judge, or he is given any state job.

Not being good at it doesn’t stop us from trying.

Number one in my creed is to try to do the right thing. I guess the day is come where a murderer, rapist, thief, crook, or liar, can all claim to be a conservative, without repenting.

Some Creed written on a piece of paper by a political party is not worth the paper that is written on. The only creed that matters is the one written in your heart if you’re a believer.

That being said, nobody is perfect these days. We all come up short. But what is going on now is ridiculous.

How much longer I feel the way I do is unknown.

It says a lot about a political party where greed overcomes compromise to the extent were basic human necessities are no longer available to some.

You are familiar with the RNC and senate thinger.

Politics is a mechanism to obtain results, some benign, some malignant. Better than the old ways of force.

Not perfect, but neither are we.

BTW, the party is made up of individuals who came up with that creed — it means as much to us as yours does to you.

And about your greed compromise point — you’re wrong.

Politics has become a mechanism of corruption.

Just where is it that I am wrong about greed/compromise?

Now since I advocate for a return to Biblical principles, how can I be wrong? I am out to gain nothing for myself. I only point out the truth, which is written in the Bible for those who believe.

Just where do you find your definition of right and wrong? Or, Good and evil?

PS- If your creed means so much to you, why is the Party not even remotely following it?

Sure, just as soon as you better define/describe ‘not even remotely.’ Also, I really don’t have to explain how creeds work right?

Define “not even remotely”? Sure. HB 2313. This proposed budget, all the McDonnell Budgets. What else?

OK, I know, but one more — I was asking about your term ‘not even remotely’ because you were implying degree in an arbitrary fashion. But you’re a partisan troll, holier than thou, Republicans are corrupt, evil, bla bla bla.

I make no claim what-so-ever of being any better than anyone else. In fact, I am at the bottom of the “ladder”. There are many people wiser, and more righteous than I.

I just point out facts. I believe the whole political system in America is corrupt. Both parties.

Apparently, that is what the majority of people want.

“It says a lot about a political party where greed overcomes compromise
to the extent were basic human necessities are no longer available to
some.”

You’re ascribing greed to our party overcoming compromise that you are accusing of removing basic human necessities for ‘some.’

Do keep in mind this is a forum discussion for politics, so I’d really prefer not using it to corrupt folks (could get us banned)

I do not see where you have answered my questions? Why should I answer yours?

In fact, it appears that you have avoided my questions? That is not unusual in a Republican blog.

‘you’re wrong on greed/compromise’
‘where am I wrong’
‘here is where you are wrong’
‘What do you mean by ‘bla bla bla’
‘you didn’t answer mine, I’m not answering yours’
‘wah wah wah’

Got it, you are a troll, I shall no longer feed you.

Maybe he decided he could no longer work for a governor who brought a lot more slime to the state of Virginia.

I did not realize that Senators worked for the governor.

This sounds shady as all hell … but huzzah for the majority I guess.

Democrats do deals all the time, “politics” should belong to both parties. Usually it’s been the GOP getting short shrift – we just don’t know how to react when something falls our way. I remember hearing about this issue months ago, that the daughter was able to serve as a judge but couldn’t because of her father in the state senate. Not too surprised that a parent might do this.

Republican Senators can still screw up breaking the budget impasse, especially any one of Hanger, Stosch or Watkins. If Republicans gain control of the Senate but still have defections on Medicaid expansion, Republicans will end up owning ALL of the budget impasse problem and the pressure to cut a deal (such as expansion adopted, but not immediately effective) will be tremendous. If you’re in one of these districts, you need to start slamming their phones NOW to help prevent Republicans snatching defeat from the jaws of victory once again.

Well there is that, weak Republicans always willing to shoot themselves in the foot.

Of course we’ll blow it, but the delicious part is seeing how.

So the General Assembly is called back into session where they will quickly pass a budget without medicaid expansion in it. The next question is, will McAuliffe then do Medicaid expansion on his own? That won’t be popular.

No, he will make a phone call requesting Holder’s Hellions come down for an extended visit. The GOP screwed up, they offered the reward before the guy resigned.

Ah, but “resigning” isn’t the same as “duties.” The conflict of interest for him has been known for months, daughter could not serve as a judge with him in the senate. This would have been whether his seat makes a difference in the majority count or not.

And, if the GA is called back. will they “anoint” Sen. “Safari” Norment as majority leader? The same Majority leader who greased the largest tax increase in Virginia history thru the Senate, HB 2313?

What about the Creed?

People can say whatever they like about Obama and McAuliffe. They are both products of failed, big spending, Republican administrations.

This news makes me very happy! It’s the icing on the cake after a wonderful convention weekend in the lovely city of Roanoke.

“So, Republicans promised the conservative Democrat a seat on the state’s tobacco commission instead.”

What a happy coincidence, Puckett leaving the senate makes him eligible for the position on the tobacco commission for which he is highly qualified. Perfect. It’s working out well for everyone. Except Terri McAuliffe.

A Democrat shows how easily corruptible he is, and some unnamed Republicans demonstrate how eager they are to bribe Democrats with taxpayer money in order to gain partisan advantage. In other words, business as usual for Richmond. The only thing that changes is which partsan label ends up where in the above sentence each time you use it.

Here is what you haven’t responded to,

“There is a far superior alternative, which is getting the government out of the medical business, and getting back to entirely private health care – the system that, before government meddling wrecked it, produced the highest quality of care in the known world.”
3 • Reply•Share ›
−

Jim Portugul Alexis Rose Bank • 2 days ago
So, you are advocating the end of Medicare and Medicaid? The end of emergency rooms must treat uninsured or indigent? No more Cobra?

Actually, it is doubtful that health insurance companies, hospitals, could survive without their government check/ eternal bailout.