Islamists and their progressive allies worldwide are increasingly rolling out the “G-word” to condemn the Egyptian government’s crackdown on the insurrection led by the Muslim Brotherhood, thereby aiming to de-legitimize the largely secular popular movement that reclaimed Egypt from the radical anti-American Sharia-driven group. Meanwhile, the REAL genocide of Christians goes largely unnoticed, and unopposed.

Our own president, playing his best Nero between rounds of golf on the Vineyard, condemned the Egyptian military’s actions in the strongest terms, and is reported to be secretly curtailing aid to the anti-Islamist government in as many ways as he can get away with. 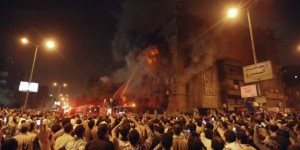 One thing the president conspicuously failed to mention is the actual, real live genocide that the Brotherhood has been undertaking for some time, and that they have accelerated in recent days. That is, of course, the ongoing campaign to terrorize, kill, maim, humiliate, and otherwise marginalize Egypt’s Coptic Christian minority.

The UN Convention on the Prevention and Punishment of Genocide is pretty clear on what constitutes genocide:

In the present Convention, genocide means any of the following acts committed with intent to destroy, in whole or in part, a national, ethnical, racial or religious group, as such:

This definition does not include combat between political opponents (it’s not like the Brotherhood is unarmed, or not fighting back). Even if the violence was all in one direction, this is obviously targeted toward political opponents, not any “national, ethnical, racial or religious group.” For the tendentious among you who are tempted to parse this, remember that the violence between the Muslim Brotherhood and the Egyptian government is an all-Egyptian, all-Muslim affair. Further, even the wildest characterizations of the crackdown cannot be interpreted to mean that the military actually intends to physically exterminate the Brotherhood.

In contrast, Egypt’s Muslim Brotherhood has been plenty clear that they intend to wipe out Egypt’s Coptic Christians if given the chance. In the words of one of the Brotherhood’s spiritual leaders:

A message to the church of Egypt, from an Egyptian Muslim: I tell the church — by Allah, and again, by Allah — if you conspire and unite with the remnants [opposition] to bring Morsi down, that will be another matter…. our red line is the legitimacy of Dr. Muhammad Morsi. Whoever splashes water on it, we will splash blood on him.

True to his word, blood has indeed splashed on Egypt’s Christians, with hundreds murdered, women and children raped, churches vandalized or destroyed, businesses and homes marked with hateful graffiti, and a general intensification of building hatred.

The parallels between this Kristallnacht and the original are apparent to those who are watching. But with nearly every Obama administration move seemingly calculated to marginalize the Copts, seculars, liberal reformers, and the military in favor of strengthening the Islamists, it is not clear that anyone in power cares. Perhaps Dr. Wagdi Gonium, a popular radical cleric in Egypt, had it right when he mocked Egyptian Christians’ hopes of help from the outside:

What do you think — that America will protect you? Let’s be very clear, America will not protect you. If so, it would have protected the Christians of Iraq when they were being butchered!

I certainly hope not. If the victims here were Muslims and the perpetrators Christians, you can rest assured that this would occupy the newscycle in a way that would make the George Martin/Trayvon Martin affair look like a momentary blip. I hope the elites in this country and elsewhere recognize this for what it is, and call the world’s attention to the imperative of stopping genocide. Given the inconvenient fact that it involves Christians as the targets, I’m not holding my breath.