Yesterday the House Oversight and Government Reform committee held a hearing on Benghazi where the parents of two victims were to speak, Patricia Smith, mother of Sean Smith, and Charles Woods, father of Tyrone Woods.   Ty Woods and Sean Smith both died over a year ago during the raid on our Embassy in Benghazi.  All but two of the democrats walked out of the hearing.  Those who walked out were:

Two democrats remained, Reps. Elijah Cummings (D-MD), the ranking member on the committee, and Jackie Speier (D-CA).  All Republicans remained in the room to hear the testimony of the parents of Sean Smith and Ty Woods.   Of course republicans remained, what normal person wouldn’t?  Who walks out on grieving parents?  What message were democrats attempting to convey?  That they really don’t care about the victims or their parents?  It’s disgusting.   How can democrats be so heartless?

Committee Chairman Darrell Issa tweeted this picture of the hearing.  The far side of the room is where democrats should be sitting had they not walked out on Mrs. Smith and Mr. Woods. 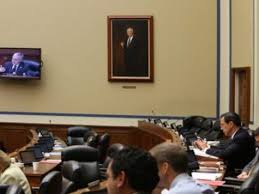