Gillespie Poised to Announce for Senate

SEVERAL SOURCES HAVE INDICATED THAT FORMER RNC CHAIRMAN AND SENIOR BUSH ADMINISTRATION ADVISOR ED GILLESPIE HAS DEFINITELY DECIDED TO MAKE A RUN FOR THE GOP NOMINATION TO TAKE ON INCUMBENT U.S. SENATOR MARK WARNER THIS FALL.

Politico reports that Gillespie is likely to enter the race. Previous speculation was that Gillespie would make his announcement this morning at a GOP breakfast in Norfolk, but that did not happen. The Bull Elephant is now told that the announcement could come as early as Monday.

What does this mean for the GOP coalition?

Still reeling from a Democratic sweep of all three statewide elections this past November, Virginia Republicans are desperate for a win. Opinions on why the GOP candidates lost last fall vary widely, but whatever the ultimate root cause it is clear to all that the Republican Party did not approach last fall’s elections in a united fashion, and everyone understands that’s a recipe for disaster. Among the dozens of Virginia Republican activists with whom I’ve spoken, there is a genuine hunger to put divisions in the party behind us and focus instead on issues that unite us (e.g., opposition to Obamacare) so that we can beat Mark Warner. The feeling on the ground is that Warner is vulnerable in a way that would have seemed unimaginable just six months ago, and that this year’s Senate race provides the party a great opportunity to heal some of the wounds that doomed the party’s chances in 2013. 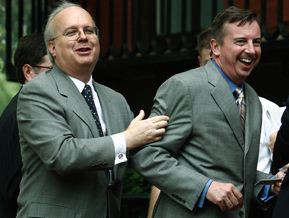 Gillespie Must Separate Himself from Karl Rove

However, at this point, it’s unclear that Ed Gillespie is the right vehicle to achieve party unity at this juncture. Gillespie’s move comes despite mounting opposition to his candidacy from among grassroots activists suspicious of Gillespie’s involvement with the Bush administration, and with former Bush political advisor Karl Rove, whose latest mission has been to reverse the ascendance of the tea party and liberty movements and restore to power traditional Republican constituencies. My colleagues at Virginia Virtucon have also rightly pointed out valid substantive criticism of Gillespie’s record as a leader in Virginia and nationally. Adding to the growing feeling that Gillespie’s candidacy is more of an establishment power play than the kind of movement that could unite the party behind a winner is Gillespie’s [UPDATE: I stand corrected on this assertion, and am reliably informed that the Gillespie campaign has not retained Ray Allen. I regret the error.]

Gillespie has some formidable strengths as a candidate that no one should fail to recognize. He has a demonstrated talent as a communicator, and he is among a handful of Republicans nationwide that can conceivably go toe-to-toe with Mark Warner on fundraising (which in turn means that Democrat dollars may be diverted from other races around the country). Importantly for pro-convention conservatives, Gillespie has demonstrated his willingness to let his fate be decided by the grassroots. Instead of taking his toys and whining all the way home in the face of a Convention instead of a primary, Gillespie is willing to do the hard work of winning votes one at a time. Pro-convention conservatives should take heart at this, as it demonstrates Gillespie’s belief that his views can be palatable to a broad swath of the party’s activist base.

That said, Gillespie faces some serious hurdles. The level of opposition I’ve heard to the idea of Gillespie as our nominee, and the visceral negative reaction many key grassroots leaders have had to his candidacy, lead me to believe that Gillespie will likely face a significant challenger for the nomination. That may come in the form of a new candidate who has not yet announced interest in the race, or it may come in the form of conservatives coalescing behind one of the lesser-known declared candidates.

Gillespie will not simply be handed the nomination, but will have to earn it. To do that, he has several key challenges:

Right now Gillespie seems the candidate most likely to win the nomination, but that will change if Gillespie fails on any one of the key challenges outlined above.  The most critical time in this campaign is the next three weeks, when the bulk of activists will first start paying attention to this race in time to influence the decision of potential opponents to Gillespie in advance of the February 1 filing deadline.

Both Gillespie and any new potential opponents will have to move fast.  The next three weeks will be interesting.  Stay tuned.

Call me cynical, but he seems very much like the same old politician who sticks his finger in the air to decide which way to vote. No moral compass at all. Is this really the best we can come up with??

Given the current makeup of the RPV and the fact that moderate/establishment candidate did poorly as a whole at the 2012 convention, I think Ed will not win the nomination due to the fact that we won’t appeal to more then 1/3 of the attendees – unless the makeup of the convention is different than last year.

Zach, nowhere is it written that only the most conservative candidates can win at a Convention (see, e.g., Jim Gilmore’s nomination over Bob Marshall in 2008). “Moderate/establishment” candidates can win when they make the effort. Unfortunately, Bill Bolling’s unwillingness to try seems to have led everyone to believe otherwise. Gillespie, to his credit, knows better and will fare very well at this June’s Convention, regardless of who his opponents are. It will take lots of face time with the grassroots, and the right stances on a few important issues, but Gillespie certainly CAN win, particularly in the absence of any new contender who could credibly unite the various segments of our coalition.

Steve,
I agree about moderates winning conventions. The convention you site was pre-tea party during a era when the party makeup was different from last year. It will come down to which party factions are most motivated to turn out this year.

Excellent commenatry as usual Steve. I agree that the problem with Gillespie as a candidate is the uncertainty he brings. He is clearly at the center of the IPW… i.e. the “Important People in Washinton.” And even the most mainstream Republican voter is sick and tired of the Washington insider crowd (read the polling).
Regarding the issues, Gillespie, as you point out, is a well-paid VIP consult-type and, as is expected, consultants take on the position and persona of their client…. therefore in reality, people are not quite sure what Gillespie really believes and how he would vote on anything. Him trying to expain-away previous support of various issues creates a confusing circle of nonsense, making him look like a flake to the well-informed base-voter who will quickly turn to a more solidly grounded candidate.
Gillespie brings money in he race and high-level IPW relationships to the office and undoubetedly will be an instant mover-n-shaker. The problem is that the R-base doesn’t envision him voting based on anyones needs but those of the IPW. Its not that Gillespie isnt a good guy or that people dont like him, its the uncertainty that he brings in the mind of the base. Gillespie appears to be just one more boys-clubber looking to move into Congress for the duration of his career.
The only way I would support Gillespie is if he himself committed to 1-2 terms and made “term-limits” the central focus of his platform, but thats not going to go over big with the IPW.