Latest Posts
Election integrity in Virginia Update #4
The Latest Casualty of the Culture Wars
Children Adapt but What a Worrisome Adaptation
Sunday Funday Memes
The five people who control the future of...
Debates and Their Uses
1.8 million “ghost voters” in 29 states

Gillespie and Warner to have first debate Saturday 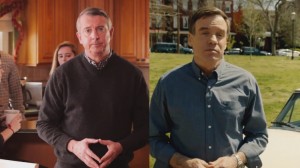 This Saturday at 11am Ed Gillespie (R) and Mark Warner (D) will square off in a debate that is being hosted by the Virginia Bar Association. This first debate will foretell the campaign strategy and messaging that both campaigns have chosen to pursue for this election, so it ought to be interesting to watch.

I thought I would make some predictions about how this first debate will proceed. Feel free to offer your own thoughts as well in the comment section.

It will be intriguing to see who is the aggressor and who plays it safe by focusing on their own positive message. There are certainly risks for Gillespie if he chooses to be aggressive in the first debate before defining himself to the public. However, given the overall popularity of Warner and the polling spread between the two candidates, Gillespie may not have the luxury to wait. The real Mark Warner needs to be exposed. It will take months for people to form a contrary opinion about Mark Warner that is reflected in the polls, so Gillespie will need to strike a careful balance between introducing himself to the public, laying out his vision Virginia, and effectively contrasting himself to the “real” Mark Warner.

Warner would do best to focus on the positive, but he might not be able to resist the tired ‘War on Women’ and evil Tea Party mantra. Warner will need to be careful though, because Virginians may quickly decide they don’t like the negative Warner, since it is so contrary to the image that Warner has built for himself as the centrist statesman who doesn’t volley in partisan politics.  It may demonstrate vulnerability and weakness by an incumbent that won’t sit well with voters.

Be sure to tune in to watch the debate and see how closely the narrative follows the aforementioned. Gillespie is encouraging everyone to attend a debate watching party or stream it live from his website. We will be sure to offer our analysis this weekend as well!