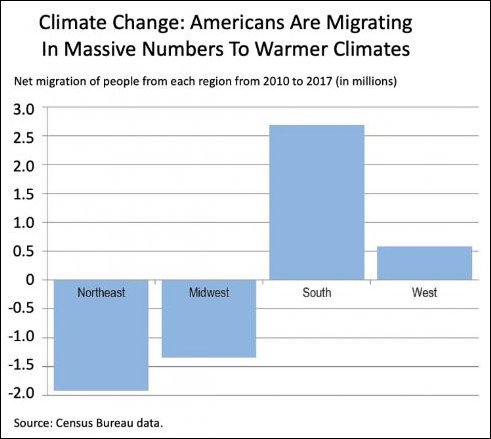 Haha! I got a chuckle out of this chart published inÂ Investors Business Daily, a notorious â€œclimate denierâ€ publication. With climate-change warriors hyping the disastrous economic impact of climate change on the human economy, youâ€™d think people would be moving north. But it turns out theyâ€™re moving southâ€¦. toward warmer climes! Writes IBD:

More than 2.5 million people moved into hurricane-prone states like Florida, the Carolinas, Georgia, and Texas from 2010 to 2017. Florida alone had a net in-migration of more than 1 million. (Only Louisiana lost population over those years.) Thatâ€™s despite constant alarms about how climate change will make hurricanes more frequent and intense.

Of course, as even IBD concedes, the Northeastern and Midwestern states also happen to be states with higher taxes and regulations, while Southern states, the biggest population gainers, tend to have lower taxes and fewer regulations. So the move south may be driven by economics more than a love of warmer temperatures.

Moreover, there are reasons to worry about CO2 rise and climate change other than the impact on human economies, such as the impact of ocean acidification on coral reefs, devastation to wildlife habitats on the land, and stress on endangered species as habitats migrate north faster than the species can. But the human species spent most of its existence evolving in Africa with its warmer climes and is more at home in warm weather than cold. Economic studies of the cost of climate change tend to look only at costs, not benefits. Thus, they overlook the quality-of-life gain from living in warmer climes â€” as affluent retirees, who are free to live anywhere,Â  prove by the hundreds of thousands every year.