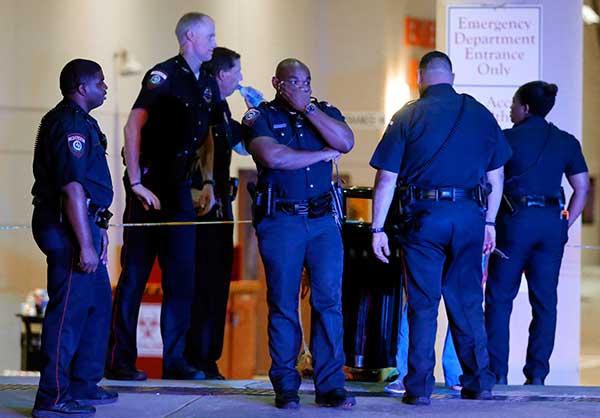 Between what at first seemed questionable police shootings in Louisiana and Minnesota, and then the ambush and murder of five police officers in Dallas with others severely wounded, followed by ambushed officers elsewhere across the country, it’s been an emotional roller-coaster of emotions this past week for many of us, and much of the nation.

I write from the baffling intersection of politics, the culture and religion, with a distinct point of view. However, I’m so sad about what I see happening in the country right now, and what our purported leaders are saying about these events, that that perspective alone seems inadequate.

This is supposed to be the new age of the twenty first century – the technological and information age where we’re all enlightened and unshackled from the chains of ancient misconceptions, racism and violence (the Age of Aquarius for those hippies still among us).

We’re often told that we’re different from past generations. We can make ourselves better by saying only nice things and pretending those words fix the bad things. “We are the ones we have been waiting for,” to quote our modest President.

What we have been so far in this new century is actually just like the last century. And every century previous to that going back through human history.

Nations are toppled, wars are promulgated and fought, injustice and racism exists, and human wickedness knows no limits.

As a broken follower of Christ myself, I understand that this is always the way of the broken world; and I know that people without God have nothing to offer and no answers whatsoever. Not one.

The ancient proverbs put it starkly: There is a way which seems right to a man, but its end is the way of death.

This truth plays out time and again over the years. This is why I’m not surprised by Dallas. I expect it. I’m never surprised by evil.

At the same time, as a Christian, I believe we possess the only universal answer to the human condition and the only thing that can heal hurting people – the transforming power of God’s unlimited love for them.

As recipients of that unending love ourselves, the believing community of God has a duty to carry that message into the world as never before. God is waiting on us. Where is the believing church at a time when it needs it to be spreading the Gospel message of that undeserved love the most?

This past week, as always, there is no shortage of people trying to conflate the evil of racism and injustice, with the evil of wanton destruction and murder. Two evils never produce anything but darker evil.

To the extent there is disparity in how African Americans are treated by the police and the judicial system – and there is – every liberty loving American should be standing with their countrymen of any and every race and background, and demand that the rule of law – the nation’s crown – be applied to every citizen. [This is exactly the reason we should fight so hard when the rule of law is continually perverted, extorted and manipulated by the country’s self-appointed ruling class.] We have to take seriously anytime an American isn’t treated like every other American.

But saying that doesn’t make it happen. It takes righteous listening and action from virtuous people. Where the police are wrong, they are wrong and should be held to account, and where the court’s adjudications are disparate between various groups, income levels, and professions, the courts need to be reformed.

But, where police are protecting the innocent and defending their own lives – which is the case most often – citizens must support those to whom they give the power to protect society and enforce its laws; and protect them politically.

But nothing justifies ignoring or pretending that the radical, Marxist ideology of the New Black Power and Black Lives Matter core groups, who are openly fomenting revolution and violence against police, are not a danger this summer. It is undisguised evil. To ignore their motives is to promote them.

Our politicians, since they have nothing to offer but the world’s empty answers, shamefully have taken this past week’s events – preceded by the Islamic attack in Orlando – and turned them into an absurd attack on law-abiding citizens owning firearms and on the peaceful assembly of people concerned about the direction and fate of their own country (oblivious to the fact that governments are the uncontested mass murderers on the planet). President Obama, who never seems to miss an opportunity to disgrace himself while overseas, was especially incoherent in his reaction, but so too are many members of Congress on both sides of the aisle.

It is almost as though many of our leaders want to see this type of radical and racial tension persist. Our leaders, as a group, are always unwilling to call evil by its name. Yet they are always quick to assign blame and inflict inconvenience on the innocent, to spend huge sums of money on endless studies and commissions, and to implicate inanimate objects.

Regardless of motives, the type of violence we have seen recently can easily get out of hand without any encouragement, much less with it. That is just what evil does. Then, the righteous use of authority will have to be used by the police or the government, and will itself be seen as a provocation and a further reason to hobble the innocent and protect the guilty.

In the book of Galatians 3:28 we’re told that “There is neither Jew nor Gentile, neither slave nor free, nor is there male and female, for you are all one in Christ Jesus.” God loves his creation. This should be our standard, because it is God’s standard.

The mark of God’s people in this world is love; for God, for one another and for the hurting and lost, regardless of who they are. We can’t expect our leaders to know that anymore.

But it is not too late – it never too late – for God’s people to take to the streets, the airways, the news media, the arts and byways of business and spread the hope of God’s love. Who knows, one day it may even reach the pulpits.