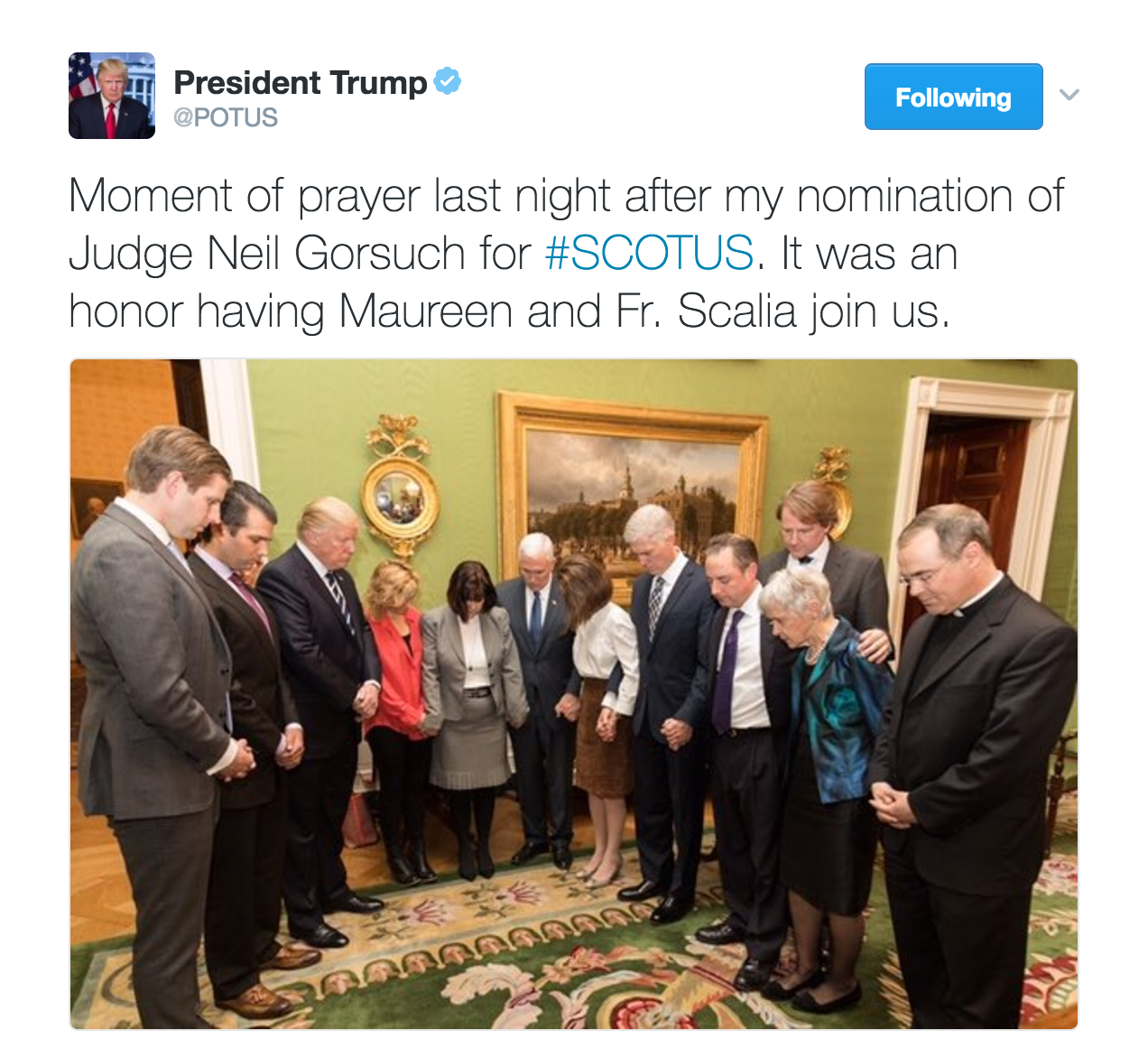 God in the Oval Office

Earlier in February, President Trump delivered his first speech at the National Prayer Breakfast (watch here), a bipartisan event held every year in Washington D.C. that has seen its share of drama.

“Trump’s braggadocios style wasn’t tempered much by the solemnity of the National Prayer Breakfast, a bipartisan tradition that dates back more than a half-century,” the Daily News lectured breathlessly.

Other corporate media outlets were in various levels of shock and dismay at the President. The speech had a “harsh” tone; it was a “campaign” speech; it was more of a “roast” and the President started out by “sarcastically” mocking Arnold Schwarzenegger, his replacement on TV’s “The Apprentice,” who is doing poorly in the ratings.

Many observers, however, thought the President was actually trying to be humorous with Gov. Schwarzenegger’s problems, asking the crowd “to pray” for better ratings – witnessed by his big smile. There were other moments in the speech that seemed almost plaintive, and still other parts that offered a vigorous defense of the Christian faith.

But the same press that routinely gave former President Obama a pass when he addressed the prayer breakfast, frequently lecturing Christians and famously making the preposterous statement that ISIS was comparable to the Christian Crusaders, would have none of it.

No one is shocked that the corporate media was uniformly negative of Mr. Trump, of course. But even a few religious folks thought that the speech was inappropriate, and some suggested that it merely confirmed that he was not a man of real faith. “He has the American civic faith,” one ventured.

Perhaps. Mostly it seemed that the Donald Trump that showed up at the National Prayer Breakfast was just Donald Trump.

By his own admission he is not a deeply introspective man. He is confident in himself, and is self-possessed in his ability as an executive. All of which fits with his younger years in which he frequently attended the Marble Collegiate Church in New York City, then pastored by the famous Power of Positive Thinking author, Dr. Norman Vincent Peale.

There is one thing that seems very clear; regardless of where Donald J. Trump sits on the faith scale, he speaks as someone bound and determined to stand for the Faith of our Fathers.

He repeatedly stated both in the primaries and again at the National Prayer Breakfast that he intends to reverse the “Johnson Amendment” that limits the nation’s pulpits from the free exercise of the First Amendment. In addition, President Trump was probably the most consistent voice during the primaries raising the issue of Christian persecution world-wide, and has already stated as President that the U.S. is not doing enough for Christian refugees. He has championed pro-life positions, and denying federal funds for abortions. He is the most pro-Israel President in a generation.

He even insists on putting “Merry Christmas” back in the language, and did so at his campaign events, which is more than recent Presidents have done.

All of this “perception” earned the candidate over 80% of the evangelical vote, and 52% of the Catholic vote, both far better results than the last two Republican candidates.

God in the Oval Office has always been a source of controversy, so in this Mr. Trump is not new. Jimmy Carter, Ronald Reagan, Bill Clinton and George W. Bush were all roundly criticized for their faith – or lack of faith – while Barack Obama seemed to consciously want to be the voice of all faiths, and subject to none.

As with so many other issues, the new President’s faith is routinely dismissed or belittled in the major media. Regardless, as he transitions from billionaire builder to leader of the Free World, the great responsibilities seem to be weighing on him, reshaping him and perhaps re-framing his thinking.

None of us can judge another heart, but there are indications that Mr. Trump is far more complicated than his enemy’s and some of his presumed supporters think. He has surrounded himself with some strong, mature Christian believers, beginning with his Vice President, and others on his staff. The cabinet has at least half a dozen committed Christians.

A quick count shows that Mr. Trump has been in church services in New Jersey, New York City, Florida and twice in Washington DC just since the election. In addition, he was prayed over numerous times during the election, and showed no reluctance to pastors laying hands on him. Only days before the election it was reported that he and Kellyanne Conway slipped off to an Anglican Church where the two spent an extended time of prayer with an Anglican priest in Manhattan.

Finally, Saturday in Melbourne, Florida, First Lady Melanie Trump sent the deranged left in the country into a complete social media meltdown by opening the President’s pep rally with the Lord’s Prayer (watch here), with his obvious approval.  She was assailed with virtually every conceivable insult and disgusting vulgarity imaginable.  For saying the Lord’s Prayer.

This is where we are in modern America.

We have one political party that celebrates death at both ends of life and publicly mocks Biblical values, and another party that has traditionally wanted the “believers” vote, but doesn’t want to be too closely identified with traditional Christians or Orthodox Jews for fear of being seen as unsophisticated and intolerant.

Mr. Trump doesn’t seem to care. How ironic it would be if he turns out to be the catalyst for bringing faith front and center on the national stage again – not to mention “Merry Christmas.”