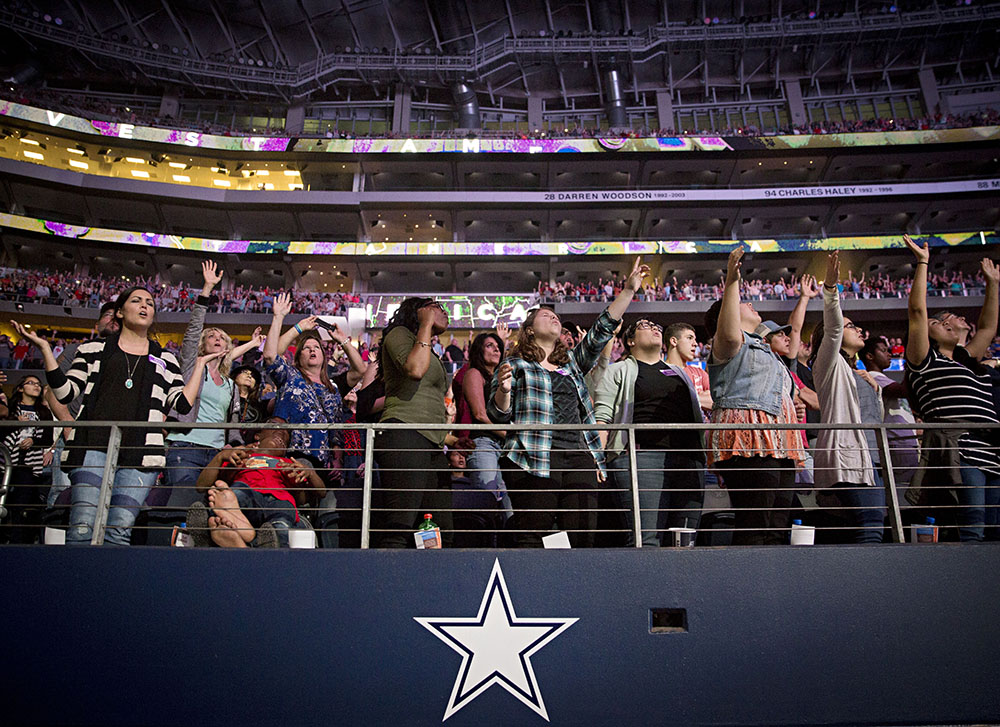 Is God on the Move in Texas and Across America?

Recently I’ve been doing some extended work in Texas and have visited a variety of large churches there, in addition to several in nearby states.

In all these venues I have noticed something I first saw in my home church in Virginia and in one of the area mega-churches over a year ago:

A renewed sense of urgency about the bold Biblical call to be Christians beyond Sunday worship, social hours, and denominations.

Last month I was at AT&T stadium in Dallas, with a capacity crowd of over 100,000 people (and thousands listening outside who couldn’t get in) to hear a call for personal renewal, and a new passion for taking the plain Gospel to the world; a call for authentic Christian witness.

In another recent service with 3,000 mostly young people in attendance, the pastor put it simply; “Listen to me church, it’s time for us to do what we are told to do. Not just listening to a good sermon on Sunday, some great singing, and then going to a nice lunch; but to leave here and do what the Lord told us to do – in every circumstance of every hour of every day.”

There was an exuberant buzz in the audience. They got it.

And, I’m struck by two things. First, all of these churches have been jam packed. And, it is amazing how consistently young these congregations are; they are made up of many young families and young singles, not just showing up, but serving and helping to run the churches.

Perhaps this is the ecclesiastical version of what we are witnessing in Presidential campaigns?

After a generation or more that seemed to emphasize the dumbed down, softer sounding “seeker” churches, unorthodox “emergent” churches, and politically faddish “social justice” churches, is there something new (well, actually old) in the wind?

These “in-vogue” contemporary church models have ostensibly been concerned with molding the Gospel message to be attractive to the declining, wayward culture; but this renewed dedication to solid Biblical teaching and discipleship that I think I’m seeing, may signal a sea change – churches unashamedly using the Gospel of Christ to mold the culture using  ancient Truths.

You always want to be careful when you’re interpreting antidotal observations as evidence of a pattern; but, then again, sometimes they are a pattern!

Perhaps it is just coincidence but I’ve been in three large services within the last six months, in three different states, where the congregations were called to come forward in a time of personal repentance and prayer, and they did so in huge numbers.

This call to authentic witness appears to be the recurring theme church to church, if I am correctly identifying what I’m seeing. People are craving the Truth – not watered down or measured out through a cultural filter.

In a slice of time where our public life is being turned upside down by a arrogance of power, lying politicians, and an elite ruling class demanding that we live in an ever-regimented and impersonal way, these churches seem to calling on congregations to do just the opposite; to be radical, 24/7 Christ-followers. To throw away the mold. To stand up and be counted, regardless of the cost.

But an ancient truth is, of course, that God never gives up on us. He is never done with us – in spite of us.

Is God on the Move in Texas and Across America? was last modified: April 6th, 2016 by Michael Giere

The negative impact on our society of an ever growing “un-churched” population is distressingly evident in our increasingly coarse and profane culture.

Thank you Mr. Wood for the detailed and informative stats on the corporate church life; I am aware of it and also the in depth and excellent studies and polling done by the Barna group, the gold standard for such information.

But I was not presenting fact, merely observations. Who knows, perhaps I just walked into the “right” churches and it was simply a huge coincidence that I had the same impressions from them all?.

I do not, nor did I claim any special insights, I am only reporting what I saw and what I felt. I’ve been a believer since 1987, and I’ve never seen nor been around – including in my own church – this type and depth of authentic and deep repentance and commitment. That doesn’t mean, nor did I say the church is growing in the U.S., I’m simply reporting to you that the ground is shaking in some churches, and God is up to something special. I have no idea what it is nor how long it will last, I can only tell you in these dozen-odd churches it is very real. For that I praise God, and I only hope it is happening across the rest of the country in however many churches are open to Him, and with whatever number of His people there are who will respond. He is never done with us, Mr. Wood. Even the Soviet Union thought they buried the church, only to find that the Real Church didn’t need a building. Blessing to you friend.

Look I don’t necessarily disagree with your thinking but your facts are totally wrong. An interesting source of hard date is Olson’s work as director of church expansion ( referred to as planting) for the Evangelical Covenant Church (covchurch.org). This has been a long term study (from the 1980’s where Olson tracked the annual attendance of more than 200,000 individual Orthodox Christian churches (the accepted U.S. church universe is 330,000). To determine attendance at the remaining 100,000-plus Orthodox Christian churches, he used statistical models, which included multiplying a church’s membership number by the denomination’s membership-to-attendance ratio. This was and is a very detailed and comprehensive piece of analysis.

His findings reveal that the actual rate of church attendance from head counts is less than half of the 40 percent the pollsters report. Numbers from actual counts of people in Orthodox Christian churches (Catholic, mainline and evangelical) show that in 2004, 17.7 percent of the population attended a Christian church on any given weekend. That number continues to drop annually.

He even employed a broader definition of church attendance, classifying a regular attendee as someone who shows up at least three out of every eight Sundays, still only 23–25 percent of Americans would fit this category. Olson documents that even an additional million church attendees would increase the percentage from 17.7 percent to only 18 percent. He concludes “You”d have to find 80 million more people that churches forgot to count to get to 40 percent.” that is frequently misquoted in the mass media regarding church membership associations.

What is going on here? Researchers Hadaway and Marler, and Chaves, authors of the “National Congregations Study,” discovered what was at play is what they call the researcher’s “the halo effect”. the difference between what people tell pollsters and what people actually do. Americans constantly over-report perceived socially desirable behavior like voting and attending church while under-reporting socially perceived undesirable behavior like drug usage or drinking.

Yet another study published in 2005 in “The Journal for the Scientific Study of Religion” by sociologists Hadaway and Marler, widely respected for their scholarly research on the church, backs up Olson’s findings.

What the reality is, putting aside the very debatable question of the correct social, cultural and constitutional role of organized religion in the political arena, that modern forms of contemporary Christianity are not growing in the United States, despite decades of activity proselytizing but rather are in continual and rather precipitous decline. I believe you have a message to spread but when wrapped in this religious filter you are clearly going to reach this countries multitudes with it but rather a shrinking faith based minority. Could these trends change, of course. Is there any factual evidence it has over the past forty years – none.

Wow, this comment was longer and more well researched than the article it is about.

I chuckle when I realize that Mike Giere will never respond to your well-crafted rebuttal.

“After a generation or more that seemed to emphasize the dumbed down, softer sounding “seeker” churches, unorthodox “emergent” churches, and politically faddish “social justice” churches, is there something new (well, actually old) in the wind?”
That passage describes the insipid Church that is fading away, which is backed by the cited statistics. But my sense is that Mr. Giere is correct. We have a winnowing of the Church and the “cultural” Christians (and there millions upon millions of them) are dropping off as NFL Game Day keeps them at home. Conversely, Satan is on the march and we see Christians being beheaded, blown up, and crucified once again causing those in the pews to go through a spiritual “gut check.”
So I think you are both correct (and I’m not just riding the middle of the fence because this is a political blog). The number of people going to church is dropping but those that are staying or joining are looking for solid spiritual food.