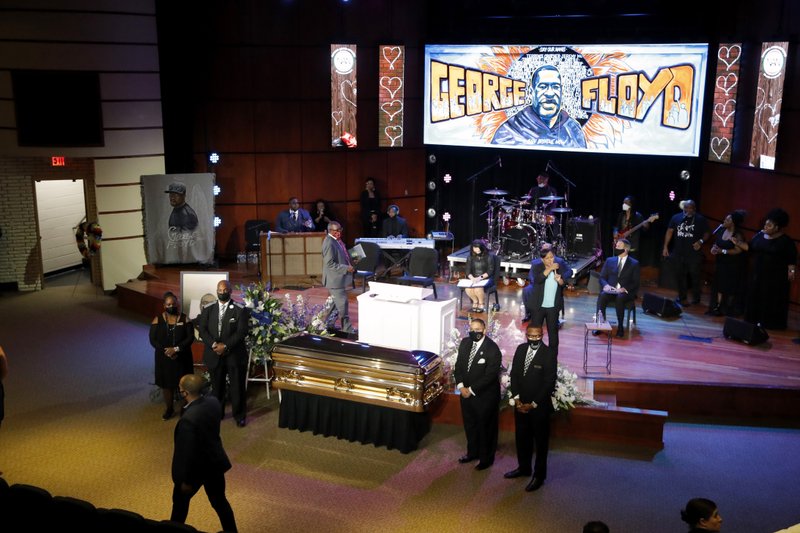 The Funeral Service for George Floyd

“Racism is first and foremost a spiritual problem.”

If you’re like me, the last ninety days have been incredibly emotional and heartbreaking in the catalog of lifetime experiences, as we witness the national and worldwide Wuhan coronavirus calamity unfold, not just represented in the lives lost, but in the massive upheaval and economic destruction across the world.

Equally bitter is to see the pandemic diminishing behind us, and what it tells us about ourselves, our leaders, our science, and our faith. It will be a greater tragedy than the virus itself if raw emotions obscure the lessons of the self-inflicted and unnecessary destruction of economies and irrelevant lock-downs, denying us of the wisdom of perspective.

And yet, that’s just what’s happening.

The mindless, irrational murder of a black American citizen whose throat was under the full weight of a white police officer’s knee for nearly ten minutes ensured that.

The firestorm that it brought to American cities was predictably planned. And, as we are in danger of doing with the Wuhan crisis, we have misjudged or ignored the lessons of the past, so we have no perspective from which to grasp the events intellectually or, more importantly, spiritually.

And, racism is first and foremost a spiritual problem. And, even though there were, and are, men who claim the Name of God who ignore or alter the clear, repeated meaning of God’s grace in Scripture, doesn’t make it less so. (see Galatians 3:28.)

Even now, I can recall in precise detail my thoughts and emotions after the major riots across the country fueled by the assassination of the Reverend Martin Luther King, on April 4th, 1968.

Dr. King had erected the rhetorical scaffolding around a “non-violent revolution” to fulfill the dream of economic and social inclusion for African-Americans promised by the advancement of the Great Society programs and the Voting Rights Act. That mostly ended with his death.

Floyd McKissick, then director of the Congress of Racial Equality, famously declared after the murder, “Nonviolence is a dead philosophy.” The radical left stepped into the breach.

[This was occurring against the backdrop of the organized and orchestrated violence of the new ultra-left radical movements, the Students for a Democratic Society (SDS), and its communist successor group, the Weather Underground.]

While there were civil, non-violent protests after the assassination, it was the looters and rioters that ended Dr. King’s dream. As a practical matter, they destroyed large sections of the established black community in many cities and destroyed small, minority-owned businesses. In Washington, D.C., as an example, took over thirty years to rebuild many areas that were burned down and to attract new businesses back to the community.

Fifty-two years later, we are witnessing the same rodeo again.

The past week of violence will not result in “justice” either, regardless of how the term is defined. There will only be greater mistrust, antipathy, and polarization, even among African-American’s themselves. Any reform of policing standards (or defunding police) will only increase crime and decrease the physical security in the black community.

Likewise, the type of looting, criminal assault, and violence against innocent (often minority) business owners, and the destruction of job-producing businesses, especially in New York, the Los Angeles area, and Chicago, can only make the lives of the broader black community worse.

Antifa, the well-organized communist and anarchist group, have gladly seen to that.

There is an Ancient Law at work here. We ignore it at our peril. Scripture frequently asserts that there is “nothing new” under the sun in the human experience and that there is Evil in this world, as real and as powerful as we allow it to be.

There is not one thing we’re enduring in the twenty-first century that we can’t read about in the ancient world. Politics, intrigue, pandemics, famines, power, money, hatred, murder, envy, one ethic group mistreating another, great empires collapsing, and new empires fighting their way to power are nothing new. They only difference is that you and I have a front-row seat.

That we should think like the modern radical socialists and one-world devotees, supposing that we can mediate the human experience without the unbending rule of law, or that we can enforce a classless coexistence through the force of a government, is hubris. It’s the conceit of man that presumes he can revoke or set aside the Ageless laws of morality and order that control the created universe, or the sin of ignoring it.

Read the Old Testament book of Hosea, here, chapter 5, and insert the modern names of nations, rulers, and religions. It’s not complicated. It’s simple. The further we move from the truth, the more we invite chaos, and evil, to fill the vacuum of the human heart.

Of course, over the last century, we’ve expunged absolute values from our society, as we have from our formative schooling that instructs our children about right and wrong. When we eliminated God from our schools in 1964, we knowingly or unknowingly replaced it with the religion of secularism, and it has proven a demanding god. Now firmly in command of the culture, rejoicing in the revelation of the worst in us.

The new god of secularism has no brakes to stop it, so it justifies killing the most innocent among us. And it delights in destroying the age-old design of family, attacking it with laws and machinations that dismiss responsibility and parenthood, and simple decency. It whispers to us that we are more worthy, more important than some other human being. It suggests violence is elective. The god of secularism speaks to our children’s emotions, telling them that truth is only a figure of speech and a lie will always say yes to their wishes.  It all makes Evil smile.

It’s an endless loop. Godless people do godless things. And too often, people who call themselves Godly, allow it. Coming to grips with racism will first require us to acknowledge it’s source. There is no other way.