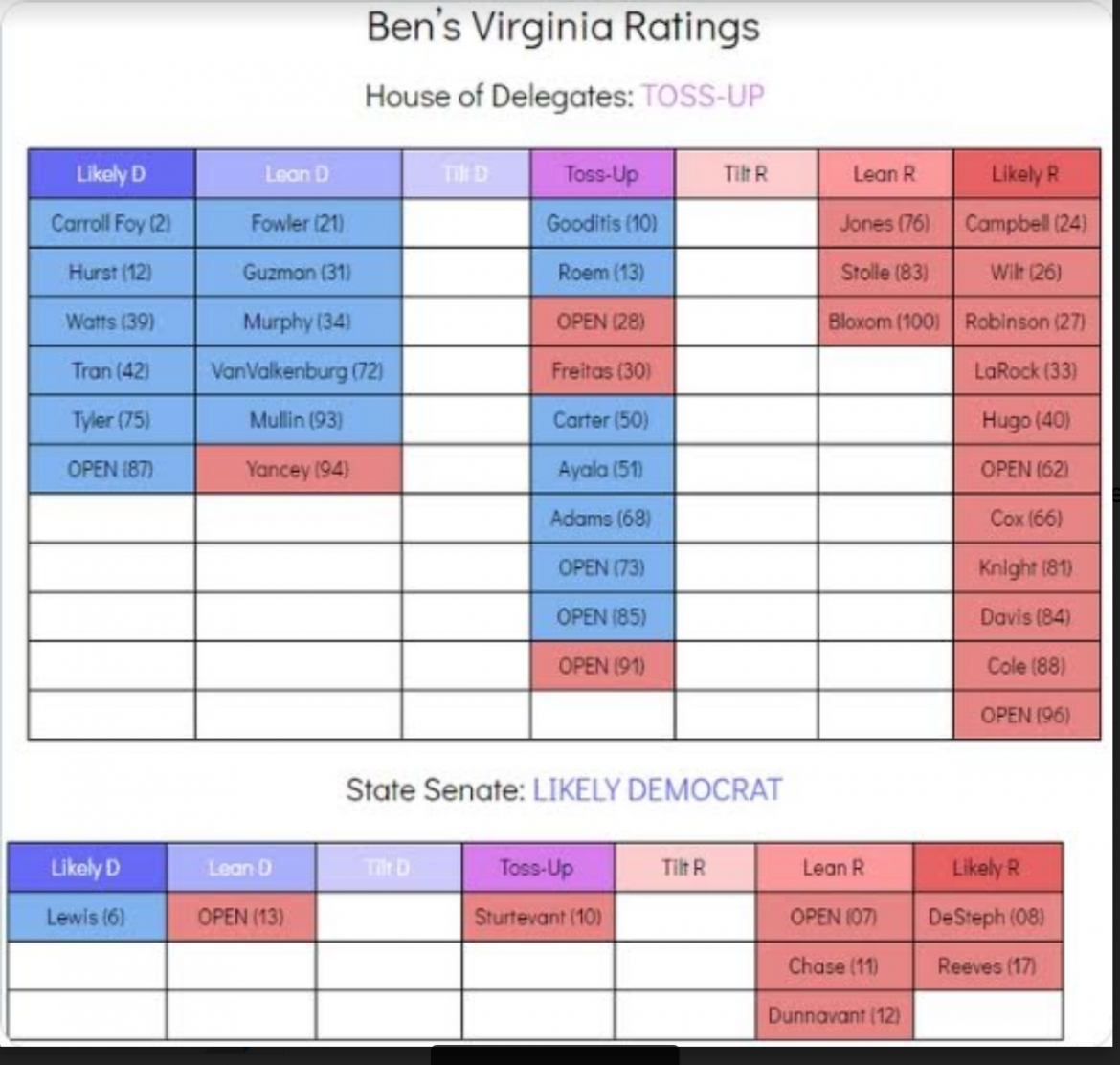 The 2019 Virginia General Assembly elections are critical.  Whichever party controls the House and Senate determines redistricting not just for the legislature, but congressional seats â€“ where Democrats now outnumber Republicans in the Virginia due to our loss of three seats last fall (Brat, Comstock and Taylor).

Maintaining Republican control in Richmond also is the confidence boost we need going into the 2020 presidential and 2021 gubernatorial elections given the number of statewide losses our party has experienced since 2012.

Much of the media and blog coverage is focused on the House it seems, perhaps because Republicans retained control in 2017 due to a coin flip in the tie between Del. David Yancey and Democrat challenger Shelly Symonds (who is running against him again in the Newport News-area district).

I believe we have a good chance of increasing our House majority despite the outside money being poured in by billionaire â€œImpeachocratâ€ Tom Steyer and many liberal groups.  Thatâ€™s because a number of the Democrats who defeated GOP incumbents in 2017 are running in GOP-leaning districts and against better candidates. One Democrat bloggerâ€™s analysis  seems to tilt to Republicans, when you consider he puts a number of these freshmen (or, should I say â€œfreshwomynâ€ to be PC) into the â€œlean Democratâ€ category

But the state Senate is important, too.  We control it by one vote. We lose one seat, and embattled Lt. Gov. Justin Fairfax, who presides, enables Democrat control.

Here, it comes down to two races, Geary Higgins in the 13th in Loudoun and Prince William counties in Northern Virginia and Jennifer Kiggans in the 7th in Virginia Beach and Norfolk.  In other words, Higgins and Kiggans.

â€œNot Larry Sabatoâ€ (Ben Tribbett) also says the Senate 12th district race with incumbent Republican Siobhan Dunnavant is one to watch, too, but she is an incumbent and has $331,836 in cash on hand as of June 30, according to the Virginia Public Access Project versus $233,657 for her Democrat opponent.  I do not see any reason why she should not win again.

But the 13th and 7th districts are open seats to replace, respectively, Dick Black and Frank Wagner, who are retiring from the Senate. Tribbett rates the 10th Â  as the only tossup Senate race, feeling Democrats will take the 7th and 12th.

Bell, whom I call â€œDirty John Bellâ€ because of his penchant to run hardball negative campaigns, is going to benefit from a lot of outside money â€“ perhaps more than disgraced FBI deputy Andrew McCabeâ€™s wife got from Terry McAuliffe in trying to defeat Black in 2015 (about $600,000).

Democrat and liberal groups seem to be pumped for the Virginia race because they know it influences redistricting.  Where is the GOP money going to come from â€“ and when?

While Tribbett is a Democrat, I encourage you all to look at his data here on Blue Virginia.  He correctly predicted the â€œBlue Waveâ€ in 2017.

MY ANALYSIS:  The first Democrat blogger I cited — who goes by â€œlowkellâ€ on Blue Virginia â€“ believes the 2019 election has analogies to the 2007 elections, when Democrats regained control of the General Assembly.   He predicts a Democrat repeat this November based on national indicators â€“ notably, President Trump being more unpopular in Virginia than President Bush was in 2007.

However, he notes Gov. â€œBlackfaceâ€ Northam is much less popular than Gov. Tim Kaine was in 2007. This, along with the Democratsâ€™ botched effort to allow post-partum abortions, might be the only issues Republicans can use to turn out their base.  Yet all the Democratic candidates have to do in many suburban districts is â€œplay the Trump cardâ€ and they can turn people out, as I am sure most GOP candidates this fall are distancing themselves from Trump except in very â€œredâ€ districts.

As is always the case â€“ whichever party turns out more of their base will win.

The fact Democratic candidates seem to have more money concerns me, but Republicans like Higgins and Kiggans could counter that with a good ground game.

Kiggans district is more compact and lends itself to door knocking; Higginsâ€™ district is more rural, but is more Republican.  He benefited greatly from Sen. Blackâ€™s machine in the primary, but now Dickâ€™s son in law, Mick Staton, is running for county supervisor in Loudoun, so will his attention (and money â€“ about $125,000 according to VPAP), be focused more on that race than the 13th?  I have no idea if Sen. Wagner is helping Kiggans to any great degree.

All I can say is this â€“ failure to maintain control of at least one House going into 2020 and 2021 does not bode well for this stateâ€™s Republican Party.  It means Democrats can dictate redistricting for the next decade, and we have crossed the Rubicon and Virginia is, indeed, a â€œblueâ€ state. I have seen the demise of the GOP in two states where I have lived, Maryland and New Jersey, and if you donâ€™t think it canâ€™t happen here, you are wrong.

Letâ€™s get out and work for our candidates this fall!