GOP Pulled the Plug on a Die-hard Gun Rights Advocate

As the shock for gun owners in Virginia begins to wane, and reality is upon us, grieving will certainly set in and two of the stages will be anger and blame.  Was it Cuccinelli, was it his lame consulting team lead by LaCivita, was it outside financial influence from liberals, was it Sarvis, or, quite possibly, a combination of it all enhanced by our very own GOP’s and RPV’s failure to support.

As for the RPV, most who know me also know that I have no love loss for Pat Mullins.  Sorry for his wife but that is in the past and his time has been over.  His job is to deliver Virginia, period.  He along with his good-ol-boy crony leadership simply cannot get the job done.  And, as much as I like the guy, here in Loudoun, guess who else can’t get the job done–Mark Sell, Chairman of the LCRC.  Both should be out on their rear, immediately and replaced with “leaders” who have a plan and the ability to implement it.

Focusing on the GOP, Larry Pratt, President of locally based and nationally recognized Gun Owners of America gives us clear insight into the fact that the GOP is likely the top factor leading to the Cuccinelli loss.  GOA also suggests a call to action–as simply talking about this among ourselves is ineffective.  I add that we need to call for new GOP and RPV leadership from the top and down a few levels–leadership which can represent and bridge with the make up of the nation and in particular, the make up of Virginia residents/voters.

WHAT THE HECK WHERE REPUBLICANS THINKING?

GOP pulled the plug on a die-hard gun rights advocate

Well, the results from Tuesday’s high-profile gubernatorial elections are in. 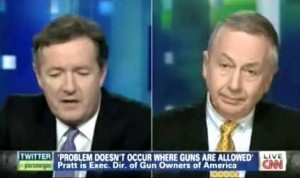 Cuccinelli lost a squeaker (48.0 to 45.5 percent), even though he was outspent 4-1 by his anti-gun Democrat opponent, Terry McAuliffe, who was able to blast $15 million more dollars into the state for advertising.

Gun-grabbing advocate, Mayor Michael Bloomberg of New York City, also pumped in more than a million dollars into the race.

So how did the national GOP counter?  Well, according to The Washington Times, “The Republican National Committee spent six million dollars less this year than it did in 2009 [for Virginia Gov. Bob McDonnell]. Cuccinelli was outspent three to one during most of the campaign and as much as ten to one in the closing days.”

During the last two weeks of the race, the Cuccinelli ad campaign went “dark,” as they were unable to answer the vicious lies and attack ads that were filling the northern Virginia airwaves.

Conservatives in Virginia are furious.  Says The Washington Post:  “The election loss [in Virginia] reignited anger among conservative Republicans who believe that the party’s moderate wing … had not backed up their candidate with money or support.”

Indeed, gun owners wonder if the additional $6 million — that was spent on Bob McDonnell four years ago — would have helped get an additional three percent of the vote for Cuccinelli.

Sadly, while Republicans were holding back in their support of their candidate, the Democrats were funding a third party candidate to take votes away from Cuccinelli.

Libertarian Robert Sarvis received immense help from an Obama-fundraiser, Joe Liemandt, who helped Sarvis get on the ballot.

According to a report in The Blaze on the day of the election, “A major Democratic Party benefactor and Obama campaign bundler helped pay for professional petition circulators responsible for getting Virginia Libertarian gubernatorial candidate Robert C. Sarvis on the ballot — a move that could split conservative votes in a tight race.”

This Obama benefactor was the BIGGEST contributor to the Libertarian Booster Pac, and the Sarvis candidacy had the desired result — as Cuccinelli fell short of McAuliffe by less than three percent.  (Sarvis took six percent of the vote.)

Why didn’t Republicans adopt the same strategy?  If a Green candidate had drawn votes away from McAuliffe — the way Sarvis did for Cuccinelli — then it would be the Republican candidate who would be the governor-elect today.

Bottom line: It appears that the national GOP, by sitting on its collective hands, views the enemy to be conservatives and Tea Party activists.  They would rather have a Clinton fundraiser like Terry McAuliffe be governor of Virginia, rather than an accomplished public servant who brilliantly articulates Republican goals.

This is truly a travesty.  It’s important that gun rights supporters ALL ACROSS THE COUNTRY contact the Republican National Committee and voice their displeasure.  Otherwise, we’ll see these same types of sellouts occurring everywhere in 2014.

ACTION:  Please contact Republican National Committee Chairman Reince Priebus and let him know how disappointed you are that the national GOP would not get fully behind a solid, pro-gun conservative Republican.  Tell him that he needs to quit if he’s not going to support real Republicans.

NOTE:  The contact form has a 1,000 character limit.  The pre-written letter below is just barely under that limit.

I am very disappointed about your meager “support” for Ken Cuccinelli in VA.

It was reported in The Washington Times (11/6/13) that you slashed by 2/3 the support you gave to Cuccinelli, compared to the millions of dollars the RNC gave Bob McDonnell four years ago.  That missing support — $6 million total — could have helped get an additional three percent of the vote (and the victory) for Cuccinelli.

The big issue of the campaign was the anti-gun ObamaCare law.  Cuccinelli almost won the race by emphasizing what a disaster this horrible law is.

You have made it clear by sitting on your hands that you view the enemy to be conservatives and Tea Party activists.  You would rather have a Clinton bagman be governor of VA rather than an accomplished public servant who brilliantly articulates Republican goals.  Evidently those goals are not yours.

If you are not willing to support real Republicans, please go home.  You are as useful as a bicycle for a fish.

Brian, there is a whole lot here. Some quick comments though:

National Party money: Yes, it would have been a huge help to have more. However, we only had about $3M less vs 2009 when you look at both the RNC and RGA together. In 2009, RNC spent alot in Va and not much in NJ and the RGA spent a bunch in NJ and not much in VA. in 2013, this flipped as the RGA spent over $8M in VA I believe. Now, it would have been really nice to get another $3M from the National Party orgs the first week of October so the campaign didn’t have to go dark. I blame the media on that one though. They did such a good job skewing the polls from Labor Day onward that everyone thought Ken was down 7-10 points. Those polls (and the Party’s stupidity in believing them) is why the money dried up.

And, if we are talking about money, Terry personally out raised Ken by something like $16M. That’s a HUGE deficit.

Nova Units: Yes, we failed in Loudoun. But, PW and Fairfax also failed miserably. We lost Fairfax by 60,000. Even if we would have won Loudoun by 4000 votes instead of losing it by that much it would have barely dented the loss margin in Fairfax. We as a party need to have a stratedy where we at least stay competitive in Fairfax, and then try to eek out victories in Loudoun and PW. The Unit committees need to be part of the strategy and implementation, but at some level Ken’s campaign pretty much wrote off Nova and the Unit committees aren’t going to be able to make that up.

Sarvis: I don’t think we know yet what Sarvis’ effect on the race was. There is evidence I have seen that he pulled from Ken, and possibly suppressed our margins in SW VA. But, in Nova I think it is pretty clear that Sarvis pulled from Terry’s margin. I don’t know what the net Sarvis affect actually was. There also was at least one exit poll that showed over 60% (maybe even 70% I can’t remember the exact figure now) of Sarvis supporters had Terry as there 2nd choice.

I think this was death by 1000 cuts. Being outspent 4 to 1, McDonnell Giftgate, Transportation bill last year, the botched VCDL survey (which I blame squarely on VCDL because they mishandled their ratings BADLY), Base turnout/ Low turnout strategy of the campaign, Poor communication from Ken’s campaign, Maybe a Sarvis effect pulling votes from Ken, and I could go on.

In the end, we lost by 2.5%, and I would bet money that other less inspiring candidates would have lost by well over 10% if they had all those things working against them.

Wow! GREAT post Brian. I couldn’t agree more. Our republican leadership in Virginia is useless. They won’t support our candidates. LCRC should have NO money in the bank right now. We should have spent every penny for our candidates. Sadly, that is not the case. LCRC hasn’t given ANY money directly to ANY candidate since 2007, despite carrying balances well over $10,000!