Virginia Republican State Senator John Watkins has introduced legislation that could foreshadow a deal on expansion of health coverage to fill the Medicaid gap under Obamacare. 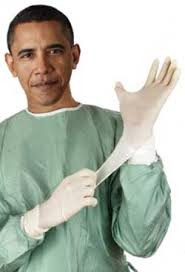 In legislation filed Thursday with the Virginia Senate Finance Committee, Sen. John Watkins (R-Powhatan) reveals in broad outline form what a deal to expand Medicaid might eventually look like. The proposal would, in essence, offer private health insurance for up to a million Virginians, including the 400,000 whose modified adjusted gross income is 138% of the federal poverty line or below (i.e., the Obamacare Medicaid gap), with deductibles up to 5% of income to ensure participants have “skin in the game.”

BUT DON”T CALL IT MEDICAID!!
But they don’t call it Medicaid expansion…heavens, no! Instead, Watkins and his allies present this type of proposal as being funded by new taxes that went into effect January 1. And, instead of funding this new program through the direct mechanisms established by the Obamacare Affordable Care Act, they would fund it “indirectly” by soliciting from the feds a payment to a new “Virginia Taxpayer Recovery Fund” to recover of a portion of those new federal tax dollars paid by Virginians—taxes paid pursuant to Obamacare.

Folks, this isn’t even like lipstick on a pig. It’s more like just putting a bag over the pig’s head so you’ll forget how ugly it is.

Thankfully, GOP legislators in the House, led by Speaker Bill Howell (R-Stafford), have increasingly hardened their stance against any Medicaid expansion since the opening of this legislative session. They issued a strong statement opposing the Watkins proposal last night, saying the proposal “is simply ObamaCareâ€™s Medicaid expansion by a different name.” Kudos to the Speaker and the whole House leadership team for standing firm, and providing crucial leadership on this issue.

GOP UNDER PRESSURE
But make no mistake: all the money, and nearly all the remaining power, is lined up against the House GOP. The Governor wants Medicaid expansion, and famously knows how to make a deal. The healthcare lobby are in full swing to make this happen, with literally billions of dollars of their bottom line at stake. We have even been told that hospital executives have been personally incentivized with offers of million-dollar bonuses to use their influence on GOP legislators to ensure Medicaid expansion becomes a reality in Virginia. The whole of the Democrat party wants expansion. Bill Bolling Republicans want expansion. Bob McDonnell Republicans want expansion. Recent polling shows a majority of Virginians want expansion. And, according to Sen. Emmett Hanger (R-Augusta), there is indeed already support for expansion among some rank and file members of the House GOP.

PLAYING CHICKEN WITH THE GOVERNOR
Clearly, something has to give on this…somebody has to blink in this game of chicken, or find a third way so that everyone involved can say the other guy blinked. The problem for the Speaker and other GOP stalwarts? McAuliffe and the Democrats may not have as much incentive to make a deal as the Republicans do. That’s because, as we’ve reported previously, under current law the Governor appears to retain the authority to expand Medicaid unilaterally, without approval of the legislature. This authority operates through the executive’s powers to administer the state’s Medicaid plan, as modified and approved by the feds, so long as no further state appropriation is required and only federal money is being spent.

Republican leaders in the House point to legislation from 2013 as having taken that authority from the Governor. And we grant that there is an argument to be made to that effect. However, a careful reading of the law establishing the Medicaid Innovation and Reform Commission (MIRC), and the budget language pursuant to which the MIRC has authority to unilaterally expand Medicaid, reveals no change to the Governor’s authority, just the establishment (within a limited framework) of a parallel authority in MIRC. The Governor’s authority on this question was widely acknowledged during the budget debate on this language, and was asserted by the Governor himself in a letter to HHS Secretary Kathleen Sebelius after the budget passed (i.e., that “the decision currently rests with me on whether or not to expand“).

Republican legislators to whom The Bull Elephant have spoken have acknowledged this is potentially a legal soft spot, but believe they have strong Constitutional arguments (not to mention lots of legislative leverage) to dissuade Governor McAuliffe from taking this potentially risky approach; and indeed, the Governor’s own suggested amendments to this year’s budgets asked for the legislature to make his authority to expand explicit, which seems an acknowledgement that his existing authority isn’t necessarily cut and dried.

However, there is risk to the GOP, too. Not only will House members be feeling immense pressure from lobbyists and left-leaning constituents, they will also have to wonder whether, if they hold out until the end of the session, the Democrats will simply choose to rely on the Governor to give to them by executive fiat what they couldn’t get in the legislature. (Sound familiar?) If Republicans want to have any further hand in controlling Medicaid costs and the nature and character of the expansion, it is conceivable that enough Republicans might break from leadership to cut a deal on something that is at least marginally better than what McAuliffe could possibly do on his own. Hence, there remains a VERY REAL CHANCE that Medicaid could expand this year, and we’re not sure there is anything we can do to stop it.

HOW DID THIS HAPPEN?
Because Republicans put us in this situation. Contrary to the popular myth, Governor McDonnell was not an opponent of Medicaid expansion. He gave lots of lip service to his opposition (“without significant reforms”), but outside of the public eye he had his administration, through Secretary Hazel and the Department of Medical Assistance, put Virginia in place to expand Medicaid at the drop of a hat. This is in stark contrast to, for example, real opposition to Medicaid expansion like that exhibited by Louisiana Gov. Bobby Jindal, who made sure Louisiana took no steps toward expansion. Moreover, in order to secure Democrat support for his cherished taxportation project, the Governor and legislative leaders agreed to establishment of the MIRC with all the accompanying appropriations (now the “caboose” budget) necessary for Medicaid expansion to occur by July of this year…work that would enable McAuliffe’s post-session expansion without needing any additional help from the legislature. (This is the same deal that could have potentially cost a Republican majority in the Senate).

We hope we’re wrong (and if we are, please tell us why), but we appear to be in a box of our own party’s making. But, at least Bob was happy about it. 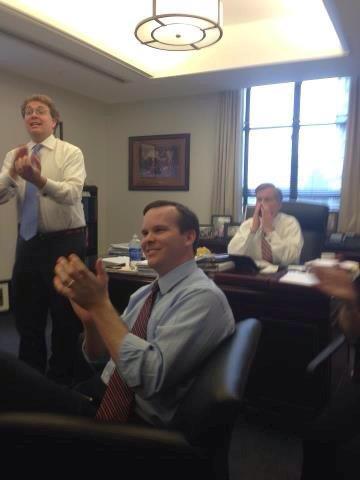 Elation in the Governor's office at the news the Senate passed his Taxportation bill on February 23, 2013. Originally posted in a Tweet (later deleted) by Bolling Chief of Staff Randy Marcus (son of McAuliffe advisor Boyd Marcus).

[…] The House GOP leadership has not been cowed by threats from Democrats to force a government shutdown over Medicaid expansion. In a highly visible manifestation of this resolve during Thursday’s session, the House will vote down an amendment to the budget that mirrors the Senate version of Medicaid expansion, introduced last week by Sen. John Watkins (R-Powhatan). […]

[…] we’ve detailed previously, this game of chicken between Republicans and Democrats has its limits, though. At some point, […]