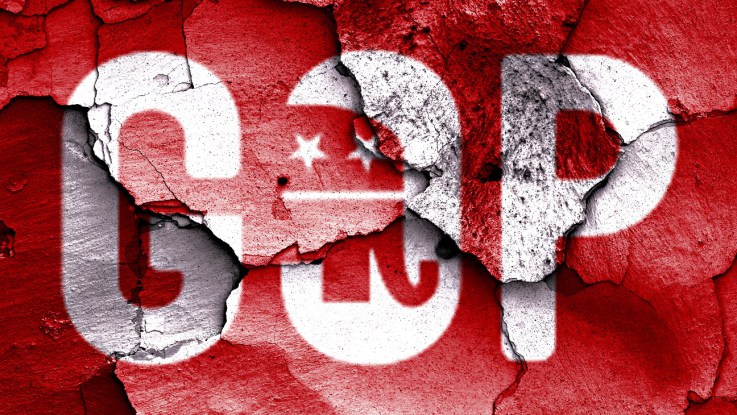 You can’t argue for unity and a big tent at the same time.

What does unity mean in the context of the Republican Party? If unity means that we’re all supposed to agree with one another, locked arm in arm, singing Kumbaya, then unity is a dream. Unity doesn’t have to mean that though. Unity doesn’t even have to mean that we all sit around hating Democrats for being Democrats, because Democrats “are bad, m’kay”. Unity could refer to a cooperation of similar principles or philosophies. Though that’s just as unlikely because some people don’t actually have principles or philosophies, no matter how much Fox News, West Wing, or Daily Show they watch. The ones who do are less tractable and cooperative with people holding any set of principles other than their own.

I want to work with activists within the Republican Party, but to do so I have to work with people who are nationalists, populists, conservatives, libertarians, Nixon/Ford Republicans, constitutionalists, and apolitical folks just looking for some responsible government. In this contentious GOP Primary, I am committed to working on behalf of whomever wins the Republican Party Nomination to defeat the Democrat Nominee – how do I do that without offending all the people who might have supported one of the other 87 Republican candidates who ran for that nomination?

Everyone complains about how there is no unity in the Republican Party, but every once in a while folks all start tossing around the word “unity”, either as a threat (you better unify behind our candidate!) or out of desperation (if you don’t, the Democrat will win!). The Republican Party has progressive populists, libertarians, nationalists, conservatives, corporatists, southern democrats, and moderates, all voting for republican candidates seeking their votes. We’re not a big tent. We’re a really, really big tent. So big that all the folks who hate all the other folks can find their own comfortable echo chambers in the great hall, without ever having to be brought to task by those who disagree.

So, if The Republican Party is a big tent full of small echo chambers, then we should not be surprised that none of us get along. We don’t talk to each other anymore. Sometimes, even the polemic doesn’t help when people are so utterly intolerant of views other than their own.

In Virginia, we’ve got divisions that aren’t even related to principles or philosophies. The most conservative Republican in the State could be targeted simply because they support open or closed primaries. Yet, Congressman Dave Brat defeated the second most powerful Republican in the House of Representatives in an open primary (not in a convention). Some of the worst beatings I’ve taken have been over comments sympathetic to primaries. Conventions aren’t fiscally responsible, I’d say. Commence beating. I’ve proven myself to be an evil RINO unworthy of the title “grassroots”.

I’ve spent the better part of this year reaching out to activists who simply no longer want to be involved. They are horrified by the vitriol and contention. Now, a lot of that is politics being politics, but not all of it is necessary.

An equally malevolent crime could be failing to oppose a moderate nominee for one elected office or another. I used to feel quite differently about this issue. Looking over the voting records of many of our Republican Representatives, I’ve often wondered what’s the point in supporting these Republicans when they vote with the Democrats half the time (or worse, MORE than half the time). However, I am also a fan of reality and data. So when I see data proving to me that conservatives or even moderate Republicans are a minority in a particular district, then I have to ask myself, “What’s the virtue in opposing a moderate Republican in a Democrat district”? Even if, by a stroke of luck or an expensive convention, we managed to nominate a real conservative in one of those districts, we’d lose in a landslide.

What’s the virtue in losing to a Democrat who will vote with Pelosi 100% of time, when we could have had a squishy Republican who would have voted with Pelosi 50% of the time? Sometimes, as conservatives, we forget that it’s not just about nominating conservatives. Our job is to actually persuade voters to be conservative – then, they might actually vote for someone we like.

I am not happy with the Leadership in the Republican Party nationally, in the House of Representatives, nor in the Senate. I’m often frustrated with the Republican Leadership in Richmond and their constant assaults on local government; and we’ve all watched the controversies between the RPV and the grassroots in the 7th District.

That said, in order to build a platform for conservative policy and legislation, I require a strong Republican Party – because we all know that there is a zero percent chance of getting conservative legislation passed through Democrat controlled governments. That means that I have to work with the sorts of people who support Donald Trump and Jeb Bush, Scott Walker and Rand Paul, Bobby Jindal and Jim Gilmore, Ted Cruz and John Kasich. I have to work with and dialogue with everyone within this big tent of ours, because screaming into an echo chamber hurts my ears. Also, everyone within my own echo chamber already agrees with me. I’m not moving the needle with my own people.

We’ve all fought so long and so hard against an establishment that has made it clear they don’t want us in their party, nor do they want our voices in their own echo chambers in the capital, that we’ve become more obsessed with defeating them, then winning elections in our own right. To do that, we must invade the echo chambers of others, make arguments we believe to be strong, and offer olive branches where and when appropriate.

Every day we move closer to President Hillary R. Clinton – why? Pride? Anger? If all our considerable pride and anger get us is Hillary Clinton in the Oval Office, then again, I must ask, what the hell is the virtue in that? Unity, when it comes to the Republican Party, is the recognition that this party is a party of minorities working together to defeat authoritarianism and collectivism in America, while promoting our own alternative philosophies. If we don’t work together, we lose. That’s not a call for absolute unity, friends; that’s a call for accepting reality and actually dealing with it.

I think this article is pretty good, but it misses the essence of the problem – the country is changing right underneath our feet. In the good old days of Reagan when I came of political age, it was easy to unify the party. We all wanted to defeat commies, we all wanted economic growth, and we all wanted people of all backgrounds to be treated the same. To be sure, there were a few wedge issues such as abortion, but it was easy to sing from the same sheet of music in the 1980s because we had a good chorus leader in Reagan who could bridge the gaps, and the gaps were not that huge. Now, there is a plethora of divisive issues dividing us and we have learned from our mistakes. Furthermore, thanks to the Internet, more of us are as informed – and misinformed – as ever. Should we recommit ground troops to Iraq? Should we give illegals another amnesty? Should we limit Moslem immigration? Should we build a wall on our southern border? And on and on and on it goes. If we in the Ann Coulter Wing of the party mention the high rates of welfare among CERTAIN immigrant groups, then the Bearing Drift Wing accuses us of heating up the furnaces at Auschwitz. That is the problem. We are a much more complex society and we are undoubtedly a society in decline. The schmaltzy “we have yet to live our best days” nonsense does not wash with the tens of millions of us who support Ann Coulter and see the writing on the wall. Thus, the platitudes of the Establishment and their total disregard for our concerns and worries makes many of us simply want to lift the middle finger their way.

Unity… Let’s unify behind a party that deliver NOTHING to conservatives. 2000 through 2007 with that idiot Bush in the White House and a GOP Congress… I don’t remember what conservative program happened then? And then the Tea Party delivers a stunning victory in 2012 AND….

Obama said… he got everything he wanted from that POS Paul Ryan’s budget deal… the POS even funded his executive amnesty.

This from a person who HATES Trump?! And malignes his supporters as low-info, low-Christian dopes!!

We HAVE a Republican Creed here in VA. Too many party and elected officials – even those who identify as “Conservative” – BETRAY those principles! Think, “Barbara Constock”!

The “Republican” brand is dead, or worse yet – a JOKE. So is, “Conservative”! Don”t believe me? Ask Paul Ryan and Marco Rubio.

Yes this author is full of baloney. Unify as long it is behind Eric Cantor or Yeb Bush… or that wonderful Marco Rubio.. We need multiculturalism and we need it now in the form of a massive amnesty.. Can’t deport them all (can’t deport anyone in these dopes’ imagination.)

Ahh.. these GOP types have screwed their own party with their endless assistance to Democrats to change the demographics of the US. It’s all over for them.. I doubt career politicians care anyway.. Did Eric Cantor care about big government spending as long as his donors were getting theirs as happened when the GOP controlled Congress and the White House from 2000 to 2007?

I ask this author to look at 2000 to 07 and please please tell me what conservative principles were advanced during that time period? Spending like Democrats, a trilion dollar war by that idiot Bush, bailouts of corporations and banks set up because the idiotic Bush administration kept the community Investment Act mortgage lending going… And of course OPEN OPEN borders.

Oh… is the goal to advance the GOP so they can spend money Tucker and pursue open border policies instead of the Democrats?

I have a suggestion for your unity if that is why you want it.

The problem seems to be that the GOP cannot unify long enough to decide who to unify for and support for President?

Victim of the TEA Party purge. Can’t help if I wanted to.

I think you missed the entire point of the piece. Consider reading it again?

Are you really Eric Cantor Jay? If you are a conservative, how did the Tea Party purge you?