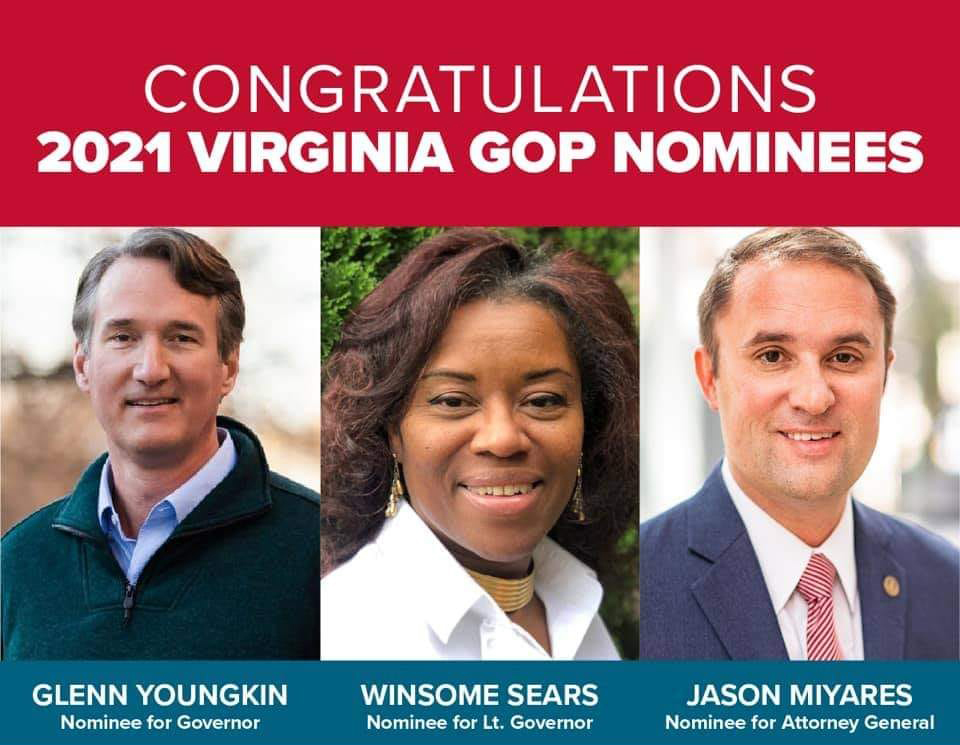 President Sleepy Joe Biden nominated a diverse group of cabinet members, often only because of their race or sexual orientation.  Identity politics and being â€œanti-racistâ€ and woke is the mantra for todayâ€™s liberals, and symbolism is more important than solutions (like renaming schools vs. educating students).

But based on the June 8 Democratic primary results, it seems Virginia Democratic voters didnâ€™t get the memo.Â Â

The party of Leftism and statism failed to nominate an African American to any of the three statewide posts, despite the kowtowing Democrats have done the last few years to Black Lives Matter and New Virginia Majority.   However, Democratic voters gave the governor and attorney general nomination to two white male professional politicians, former Gov Terry McAuliffe and 2 term attorney general Mark Herring, who was supposed to be the heir apparent to Gov. â€œAl Jolsonâ€ Northam.

In addition, 100,000 fewer people Â voted in the Democratic party primary than in 2017, perhaps a sign of less enthusiasm now that Donald Trump is gone and canâ€™t be a bogeyman to gin up their base, as John Massoud writes here. Â Â

This was not a good night for Democrats, but a truly wonderful one for Republicans, who won the â€œdiversity testâ€ by nominating Glenn Youngkin as governor, a white male;  Winsome Sears as Lt. Governor, the first African American woman to be on a statewide ticket;  and attorney general candidate Del. Jason Miyares, who is of Cuban descent.  This is something Republicans should crow about, especially imploring black voters to support Sears to â€œmake history!.â€

In addition, there are now at least four more open seats in the House of Delegate races where Republicans can compete as Democratic voters jettisoned four incumbents in their primaries.   We need just six wins to take control and turn back Leftist destructive legislation.  A few GOP-held seats, like Kirk Coxâ€™s 66th, are now open, so the HOD races are still an uphill fight for us.

McAuliffe won every county and city.  None of his black, Latino and socialist opponents stood a chance.

Herring, a former Loudoun state senator, and onetime elected colleague of mine when I served in local elected office in Leesburg, barely won renomination for a third term over African American junior Del. Jay Jones of Norfolk.Â  It seems Jones carried about half the counties and cities, garnering 43.3 percent of the vote.Â  He also won his House of Delegates primary in Norfolk, but will have a GOP opponent, Hahns Copeland, whom I helped recruit (this is my delegate district).Â

Herring is the odd man out on this ticket.Â  McAwful screwed him over by running for governor and Northam endorsed Jones in the primary to continue his penance for being in blackface as a med student.Â  Democrat disunity might help Youngkin-Sears-Miyares.

In addition, freshman Del. Haya Ayala, who is part Latino and Middle Eastern, is the Democratâ€™s only nonwhite on the ticket as Lt. governor.  Winsome Sears, our candidate, already issued a statement pointing out how much of a radical she is.

Samirah and Carterâ€™s defeats were the sweetest for Republicans.Â  Both are radical socialists who never shed their activist skin when they got elected.Â  Samirah, a Palestinian Arab, is anti-Israel and disrupted President Trumpâ€™s speech at the Jamestown quadricentennial.Â  Â Carter participated in anti-police demonstrations and was pepper sprayed. Â

Neither were reprimanded by their Democrat caucus for their antics, but Democrats and Republicans joined hands to condemn three delegates and state senator who merely appeared at the Stop the Steal rally on Jan 6, but never participated in the Capitol Hill assault.

Carter had the audacity to issue this tweet  contending his life has been a mess and heâ€™s had death threats.  Why do liberals always cry pity and play victim when they lose?

Levine is another radical, but Heretick, who defeated the late blue dog Democrat Johnny Joannou in 2015, was more moderate.  He was upended by what appears to be a flaming local radical activist, age 26, who opposes Dominion Power, the 800-pound gorilla in Richmond.  The 79th includes some conservative precincts in Norfolk, Chesapeake but is largely in Portsmouth, which is deep Blue.  Lawrence Mason,  another candidate we helped recruit, is a Navy veteran and GOP nominee and now has a pretty good chance to win.

Another June 8 oddity.  Virginia Beach School Board member Kimberly Melnyk,  who won her seat with Republican help, is  the Democrat nominee in the 84th in Virginia Beach and will face incumbent Del. Glenn Davis, who lost his bid for Lt. governor in our May 8 unassembled convention.

Melnyk won narrowly, perhaps because her defeated opponent argued she was â€not a real Democrat.â€  So, itâ€™s Republican against Republican in the very competitive 84th, which Davis worked very hard to win in 2019.

In the 83d GOP primary, Virginia Beach gun rights attorney Tim Anderson leads former Del. Chris Stolle by about four votes as of todayâ€™s canvass, and a recount is likely.Â  Stolle lost to Democrat Nancy Guy in 2019 primarily due to court-ordered redistricting and the anti-Trump vote.Â Â Â

Indeed, making Virginia red again, or at least Purple, will be a significant challenge, but there are five months remaining in the campaign till the Nov. 2 election and five months in politics can be an eternity.Â  It is possible if all of us unite behind this ticket and get our volunteers out there and take the issue of Trump and focus it on policing, transportation, education (especially supporting high standards and stopping critical race theory courses), and reopening the economy, we can succeed.

Each of the three candidates have critical issues to cover in order to win. Glenn and Winsome need to limit abortion opposition to post 20 weeks because women want control over their bodies. They need to oppose legalization of marijuana because most people don’t want it, and to reinstate the death penalty because it functions to deter murders while it is not related to race, but actually failed parenting. Winsome needs to punctuate her opponent’s limited education, distortion of race, and lack of virtue. Jason needs to stop exclaiming his Cuban heritage which he is proud of since many citizens won’t vote for someone who reminds them of illegal immigrants from Central America. He also needs to clarify that prisons are full because illegitimate babies grew up to become anti-social personality disorders (sociopaths) and not because of race.

Sooooo, identity politics and â€œopticsâ€ are the goal now? Asking for a friend.

I get that itâ€™s a hurdle to overcome but you are panting like puppies over white/black/brown. I can see the picture just fine but what about the whole content of character thing. Just a suggestion from the cheap seats but how about moving beyond skin deep giddiness to some issues, policies, and stances?

It’s not the optics alone. It is that we have pulled off the trifeca this year: good policies, well-funded, and visually appealing. This is a winning ticket.

And, to a degree, it is just to rub it into Democrats’ faces. They like to taunt Rs with how diverse Dems are and, yet, here they are with two old white guys on their ticket (and one that admits to wearing blackface!!) while Rs have a white/black/latino ticket. The irony is delicious.

Results from the Virginia primary cement the Virginia Republican Party as the party of Trump, voter suppression, and insurrectionists. Across the board, the GOP nominated dangerous antidemocratic candidates who threaten to roll back the clock on progress in the commonwealth. These candidates have embraced conspiracy theories and spread false information, putting their support for Trump over their support for democracy. The GOPâ€™s overwhelming endorsement of these candidates on Tuesday proves that far-right extremists are going to continue to be the face of the party.

We should not be surprised that Republican candidates who echo lies about election fraud and hold far-right views on issues from abortion rights to gun safety were most successful. The RPV has courted the votes of the far-right for years, and Tuesdayâ€™s primary results only demonstrate that these extremists have become the partyâ€™s mainstay.

I’ll be back in November to collect a cup or your tears.

RPV nominates three candidates each with their lips surgically attached to Donald Trump’s ass and they call that “diversity”.

Democrats nominate a white Southerner who used to wear blackface and they call it progress.

At about 485,000 Democratic ballots cast this year, a 100,000 ballot loss of voters is a 20% drop. That is a big drop. Add to that several incumbent Democrats getting primaried out of a job and all the problems at the top of the Democratic ticket, and this bodes well for Republicans in November.

The optics are good for Republicans. Further, Youngkin is very smart and well capitalized. I think he can pull the Republican ticket together in November in ways that RPV was unable to do in years past. It is going to be a good November.