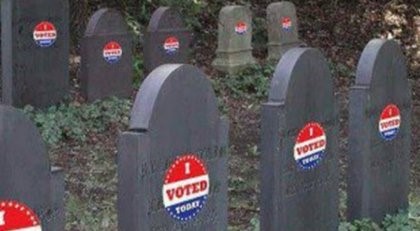 Richmond, VA – Yesterday, Gov. Ralph Northam vetoed Del. LaRock’s HB 1167, a bill to allow greater efficiency in voter roll maintenance. The Governor’s veto statement, however, shows that he was either misled as to the bill’s effect, or is trying to make it difficult and time-consuming for local registrars to clean up voter rolls. The vetoed legislation was supported by the Voter Registrars Association of Virginia.

Del. Dave LaRock said, I’m disappointed in the Governor’s action. This legislation merely clarifies existing practices, makes them more efficient, and would not require anything new.

In the 2017 Delegate races, we had a tie and several other close elections. Every illegitimate vote cancels out a proper vote, so we should allow our voter registrars to efficiently update voter rolls when an individual tells local courts they are not eligible to vote. Unfortunately, partisanship in the legislature and the Governor’s office is undermining local officials’ efforts to efficiently and accurately conduct elections in the Commonwealth.”

Existing law requires jury commissioners to, “…make reasonable effort to exclude the names of deceased persons and unqualified persons from the master jury list.”, which they do by sending a questionnaire to potential jurors. If an individual who is registered to vote returns their questionnaire claiming they are not eligible to vote and serve on a jury, that information can, and should, be made available to the Voter Registrar. Registrars then notify the voter and allow the individual to confirm their eligibility to vote.

Delegate Dave LaRock represents the 33rd House District, including parts of Loudoun, Clarke and Frederick Counties.LaRock serves on the Transportation Committee, the Science and Technology Committee and the Education Committee.

Why are there so many Democrats around always trying to get people to register? So that nonvoters can be impersonated on election days. Leave the dead on the rolls, register illegal aliens, don’t remove names of people who moved, etc. The goal is always the same: impersonation to get Democrats elected. Evil.

Pursuant to Article V, Section 6, of the Constitution of
Virginia, I veto House Bill 1167, which would require jury commissioners to
collect information from persons not qualified to serve as jurors for specific
reasons and subsequently make that information available to the general
registrar of that locality. The bill would also require the general registrars
who receive this information to initiate list maintenance procedures.

My Administration is committed to protecting the right to vote
and ensuring that Virginia elections are conducted with integrity. There is no
evidence or data that jury information is a reliable source for voter list
maintenance. Relying on jury information to maintain our lists could weaken the
veracity of our voter rolls and thus our elections. Furthermore, this unreliable
information could endanger the registrations of eligible voters and prevent
them from successfully casting a ballot.

House Bill 1167 could harm qualified voters and undermine the democratic
process in the Commonwealth of Virginia.

Accordingly, I veto this bill.

Don’t we get jurors from the registered voter lists?

Is there any way we can get more felons into the jury pools so that our voter rolls can improve?

Is anyone really shocked

What has happened to Virginia, the Mother of Presidents? Terry McAuliffe’s legacy lives on….The Obama/Soros/Clinton era has done more damage to our country that most can imagine. Where’s the justice regarding Clinton’s actions like Uranium One and selling influence all over the world using Clinton Foundation money? WHERE??????

The issues you raise are federal, not related to our great Commonwealth. Ask your handpicked attorney general, Jeff Sessions. It’s in his lap. They are reportedly busy draining the swamp, so you should see results you can trust in due time. Reportedly, Sessions placed this matter in the hands of the Utah federal prosecutor recently: https://bit.ly/2INZQqu

My question is: How in the world could we have elected this guy as our governor? We’re also going to pass Medicaid expansion with control of the legislature. Neither has anything to do with Sessions.

Because the electorate looked at our offering and passed. Corey might have lost as well, but because we put forth Ed and lost, the party made the wrong choice of a nominee.

Our SCC (take a look at the roll call and see how your SCC represented YOU!) voted AGAINST a resolution condemning Medicaid Expansion (thanks Sharon) why would weasel legislators do anything else? Our legislators needed that ‘Vlad-like’ flexibility to ‘negotiate’ — It’s not like they’re posing for pictures with Medicaid expansion protesters.

Too many Virginians are still too solely focused on what the Democrats are doing to us here in the state and in Richmond. They complain they are contaminating our election primaries, they are pushing Medicaid expansion, they are vetoing legislation, etc. Folks that is the nature of the beast and has been for some time and you aren’t going to change that fact.

One might ask though how have they managed to gain such clear and close to total political superiority in the state in little over eight years! It took decades in California, New York and Massachusetts for example to grow such Democratic party dominance, here in Virginia we are talking about a little over eight years.

Many use what I consider the broken argument that it is all the fault of the expansion of the state’s federal workers, avoiding the reality that the federal worker has been in place in Virginia for decades and the Democratic party’s penetration has occurred across ALL of the state not just the northern Virginia suburbs. So what does that leave you with?

I look at the Republican Party itself that has devolved into endless partisan fraction squabbling and almost complete isolation and dissociation from its once strong Virginia voting base. It’s political messaging is no longer resonating and it’s reliance on recycled candidates or unknown no name candidates is a repetitive failure at the polls. Finally, and perhaps most serious is the strong impression among the many in the Republican voting base that the state party (and many of its candidates) themselves do not actually fully support the existing Republican national administration and its President elect. In other words too many state Republicans voters believe that they still hold strong Republican values but it is the state party and many associated opinion leaders that have left the party house.

I was in NYC in the early 1970s observing an early earth day street demonstration on a beautiful spring day lunch break when I noticed a march poster that sums up for me today’s situation most succinctly almost fifty years later. The poster read “We have met the enemy and it is us”.

It also doesn’t help that we don’t run challengers in 27 HoD seats.

Now that is a problem but filling ever election slot requires running a diversity of candidate types and candidate perspectives and the current party is not much interested (if at all) in doing either. They spend more attention taking internal secret votes on banning the party’s non clones than working to determine where they could be successful. I believe Darwin would identify as a highly inbred population that is not well suited for adaption and therefore long term survival.

The out of control urbanization in places like Loudoun and Fairfax Counties has been the key to the Democrats success. Republicans don’t do well in cities, and NOVA is a big city now.

I’m not willing to grant that urbanization=Democratic Party dominance. Otherwise we all might just as well fold up our tents and go home because mega urban centers are the future not the exception. Republican messaging can target mass urban centers just as well as Democratic its just that we rarely make the effort to do so and don’t have much to say when the opportunity does arise.

The founders feared urbanization in that a few cities could not only dominate a state but collectively the entire federal government. There fear was well founded as the major cities in most blue states control state politics and, in the case of California and now Virginia, big city complexes support illegal immigration against the interests of American citizens.

So is that why we apportion and weigh representation by GOP turnout and vote for our party Mass Meetings, Conventions, Canvass’ and Party Leadership??

Wait just a minute there, Republicans were in control of elected offices and the Boards of Supervisors in those areas before the out of control urbanization, reckless development, and metro expansion…

All that is necessary for evil to thrive, is for the good to stand by and not be Republican. (I may be paraphrasing here.)

Of course he vetoed it. Virginia has a surge of immigration, much of it illegal. Why would a Democrat want to eliminate their votes?

You got it right SJ. But even LEGAL immigrants, for a variety of reasons, disproportionately want big government.