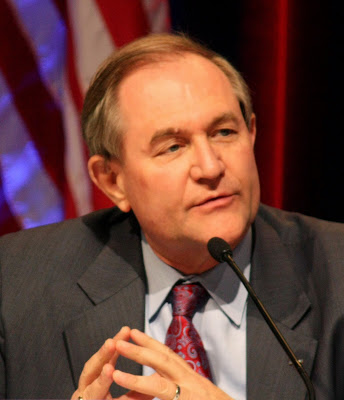 Governor Gilmore Challenges Trump to a Debate on the 14th Amendment

“Donald Trump is wrong on this issue and on his views of the 14th Amendment,” Gilmore said in a statement. “I challenge Donald Trump to debate ‘mano a mano’ on this issue. His comments are irresponsible, offensive to Latinos and a threat to the U.S. Constitution.”

“Any time, any place,” Gilmore said. “I will debate Donald Trump on his wrong-headed view of the 14th Amendment and his determination to deny children born in America birthright citizenship.”

Gilmore supports strengthening security at our borders, and deporting criminal illegal aliens but

“I draw the line at taking away anyone’s citizenship and undermining the Constitution.

“Donald Trump is pandering to the worst elements of our society in this issue and his strategy is not good for America or Americans,” Gilmore said. “I challenge him to debate me on this issue so I can show the nation his statements and views are not correct.”

The next Presidential Debate will be on CNN on September 16 but Governor Gilmore was not invited to participate because he has not yet hit the necessary 1% national support that is a required for participation in the debates.

Governor Gilmore Challenges Trump to a Debate on the 14th Amendment was last modified: August 28th, 2015 by Jeanine Martin

Gilmore is not even a bug on the windshield of Trump’s 757.

Gilmore may however debate Trump in his own mind. That being the case, only Gilmore would know who actually won the debate.

Gilmore is so dishonest. Trump never advocated for taking away anyone’s existing citizenship. So tired of these strawman argument smears. You’d think that Gilmore could at least TRY to be honest.

Trump will likely not respond to this at all, not should he. In any case, this is one place where Trump happens to be correct.

Now, why would The Donald stoop so low to debate a total non-entity in the campaign? Gilmore knows he stands as much chance as being elected president as I do, but perhaps I thought he was vying for a spot on the ticket, given the fact that VA is a key swing state. Not gonna happen now. If Trump is the nominee, we need someone like Susanna Martinez (assuming she has been a good governor with no skeletons). A white male will need either a Hispanic or a woman, and while I LOVE Carly, we cannot have two non-politicians on the ticket. Walker-Fiorina would be good.

That works for me, Walker-Fiorina sounds great!