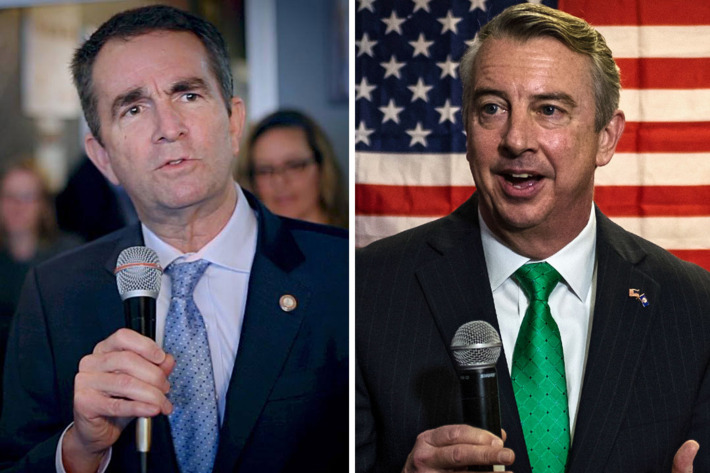 Governor Northam was to begin his apology tour today at Virginia Union University until the President of the school’s student government association, Jamon Phenix, asked the Governor to stay away from their annual tribute to students who 60 years staged a sit-in to protest segregation. The story is here.

This whole sad story began at the end of January after Governor Northam went on the radio to explain and support a late-term abortion bill that had been introduced in the General Assembly.  The bill would have allowed an abortionist to kill a baby even as it was coming down the birth canal, about to be born. But the Governor took it one step further, killing infants after they have been born.

If parents and doctors decide to kill an infant, that’s infanticide.

Northam’s comment so enraged one of Northam’s fellow students at Eastern Virginia medical school he/she released a photo from the Northam’s own yearbook page showing a man in Blackface standing next to a man in a KKK robe and hood.

At first the Governor said he was the man in Blackface, the next day he said he wasn’t even in the photo on his own yearbook page but admitted he had used Blackface that same year in an imitation of Michael Jackson.  He went on to explain that he only used a small about black shoe polish because he knew how difficult it is to remove shoe polish from skin.  How would he know that?  Lots of practice with shoe polish on his skin?  Northam also explained that the man in Blackface in his yearbook couldn’t possibly be him because the man is holding a beer in his right hand and Northam can barely hold anything with his right hand as he is left-handed.  If Northam wasn’t the man in Blackface then he was dressed in a KKK robe and hood.  I don’t believe for a second that this photo just happened to appear on Northam’s yearbook page and he was neither man in the picture.

Later when Northam was at VMI his yearbook showed his nickname as “Coonman” and he had no idea why his classmates called him that.  Really?  No one has a nickname in their yearbook without knowing how they garnered the name.  And Northam wasn’t even smart enough to come up with some dumb excuse, such as he hunted raccoons in his youth.  Nope.  He just had no clue why that was his nickname.  Defies credulity.

After outrage at Northam’s infanticide comments and his past racial issues, he decided to go around Virginia to ‘heal’ us and apologize for the sins of Virginia.  Who has to heal?  I didn’t do anything that I need to heal from or apologize for.  Not all Virginians share Northam’s racist past or his acceptance of infanticide.

To whom does Ralph Northam owe an apology and reconciliation?  First, he owes an apology to all of us for his cavalier attitudes about infanticide. It’s abhorrent to all Virginians.

Second, the Governor needs to apologize to Ed Gillespie who ran against him for Governor in 2017.  Northam’s campaign labeled Gillespie as a racist, repeatedly.  It was a complete lie but that didn’t matter to the Northam campaign. They ran a terrible ad showing Gillespie supporters driving a pickup truck, with a confederate flag, chasing minority children down the street as the children ran and screamed in fear and terror.  Gillespie is not a racist, nor has he ever been a racist, unlike our Governor.  Northam should publically and privately apologize to Ed Gillespie.  It is Northam with the racist background, not Gillespie.  Does anyone believe Northam would have been elected Governor if his racist background had come to light during the campaign?  Would his infanticide views be accepted by Virginia voters?  Of course not.  Today we would have Governor Gillespie, a fine man who does not support abortion and infanticide nor he has ever been a racist.  Northam owes him an apology.