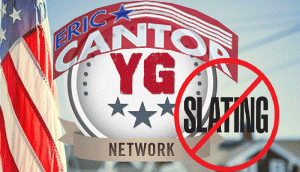 Last night at the Henrico GOP Mass Meeting the conservative grassroots demonstrated that, when they work together, they can be victorious against the big money, paid staff, and consultant antics of Eric Cantor’s Young Guns PAC. The victory might be lost on some who don’t understand the inside baseball of partisan politics (since it makes most of us want to vomit), but I can guarantee the significance of last night was not lost on Eric Cantor’s consultant, Ray Allen, and his Young Guns Team.

Eric Cantor’s hometown is Henrico County. This is where he, his family, and parents live. It is significant that the grassroots was able to bring out more people to the mass meeting than Eric Cantor – who has lived in Henrico for practically a lifetime. In fact, Eric Cantor and the Young Guns did not marshal together even 200 people to come out and support Cantor’s efforts. Pretty amazing.

Historical context will help you appreciate the accomplishments of last night. Before the tea party and liberty movement, there has always existed a small group of us “anti-establishment” members in the Republican Party. We affectionately referred to ourselves as conservatives (fiscal and social conservatives) who were challenging the status quo Establishment. We were the squeaky wheel in the Party as we called out Republicans who voted for massive tax increases, substantial spending increases, more nanny-state regulations, and for anti-family legislation. We were a small, but loud voice. Unfortunately we didn’t have the critical mass we needed to successfully and consistently challenge these wayward Republicans. As a result, the Establishment was unhappy with our complaining, but they didn’t see us as a threat.

All that changed a few years ago with the arrival of the tea party and liberty movement. The fiscal and social conservative veterans who had been fighting the battle for decades joined forces with the tea party and liberty activists and a coalition was born. We finally had the critical mass required to have a seat at the table and demand that the Republican Party return back to its Republican Creed roots. As a result, many of these local grassroots members ran for elected positions within the Republican Party (State Central Committee and Unit Chairman) and won a few years ago.

Eric Cantor and his team made it very clear that they were not happy with these results. They had lost control! Conservative grassroot activists now had the majority of votes in the Virginia GOP and could make decisions that were best for “the people” and not the politicians. That never sits well with politicians since power and control is imperative for them.

Cantor’s Young Guns hired field staff, sent slick mailings, made professionally paid phone calls, and leaned on other politicians to push their narrative – all in an effort to capture the votes they needed to start regaining control of the Republican Party of Virginia. We have seen the destruction they have left in their wake in Virginia Beach and Campbell County. The fact that the conservative grassroots successfully pushed back against such heavy “guns” (yes, I went there) and won last night in Henrico is substantial. We only won by 6 votes, but the victory was huge considering the location of the challenge and the time and money poured into Cantor’s effort.

A few things to note about last night:

The lesson here is big. It is easy for the grassroots to become deflated and demoralized when we lose elections, especially when we have a couple of losses in a row. It is even worse when we know that victories by the opponent have been achieved through underhanded tactics such as disenfranchising conservative voters through slating. But what we demonstrated last night should send a Chris Matthew’s tingle up the leg of every single conservative activist. We showed that if we work together, focus on a singular mission and every single person carries their load, we can accomplish even the unthinkable – winning in Cantor Country!