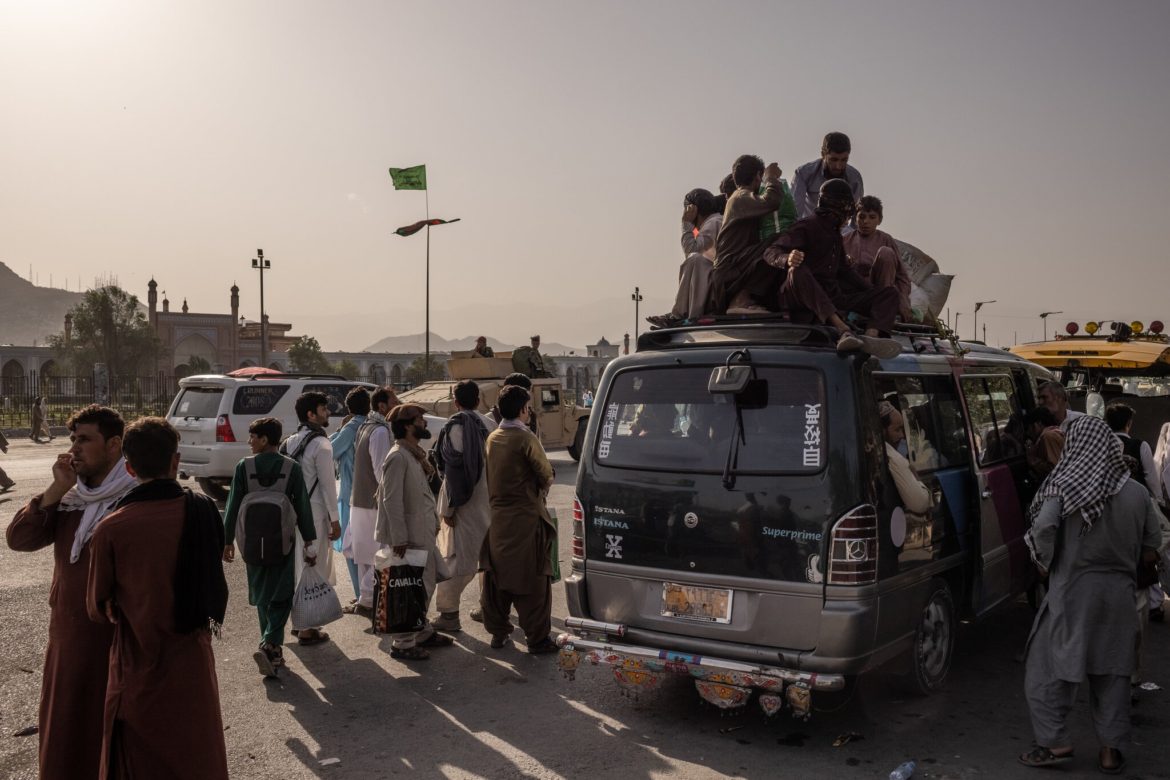 Groups preparing to flee Kabul, Afghanistan, on Sunday morning before the Taliban took over the city. (Credit...Jim Huylebroek for The New York Times)

A few decades ago, I read James A Michener’s Caravan: A Novel of Afghanistan.  Although it is billed as an adventure story, it was really more of an entertaining travelogue through that landlocked and hostile country.

Michener describes two competing ideologies associated with Afghanistan.  The fundamentalist form was tribal much like the American Indians who followed the seasons and knew the hidden paths and natural tunnels.  The modern form was more “citified” and enjoyed the trappings of civilization.  Unfortunately, the modern form always seemed to live on the edge of disaster.  Ancient tribalism and the hostile natural environment invariably threatened its demise.

It is not surprising, therefore, that a fundamentalist Muslim group, the Taliban, was able to dominate Afghanistan so quickly and thoroughly.  The younger “citified” men and women had been protected by the American military umbrella.  The Afghan military had enjoyed the American technology advantages of superior communications and air power.  Unfortunately, when the violent and evil Taliban began their assault, the young Afghan men, left to their own devices and without the backup of the American military, ran away.

Initially, the American mission in Afghanistan was reasonably clear and limited.  It was to eliminate the terrorists who attacked America on 9/11.  However, after 20 years and four presidential administrations, the mission became muddied and political.  American military personnel were added, subtracted and modified as policies changed.  Political Inconsistencies did not encourage the America friendly Afghans.  They also emboldened Afghanistan’s many enemies and waiting terrorists.  In the nearly instantaneous and chaotic end to the mission, America looked foolish and inept, – which in the world of geopolitics is dangerous.  Mixed signals of weaknesses and strengths cause enemies and friends to miscalculate.

It should be noted that Afghanistan has been the target of conquest for thousands of years.  Alexander the Great conquered Afghanistan, but at a horrific price.  He lost many fighting men to the Hindu Kush and the Northern Afghan desert.  In more modern times the British attempted to control Afghanistan.  The British were fought 3 major wars there.  (At the end of their first Afghan war in 1842, an entire British army was massacred while retreating back to India.)  The Russians took their turn in the 1980s and left after having lost nearly 15,000 men.  The Americans came after the 9/11 terrorist attack and stayed 20 years before leaving unceremoniously.  Afghanistan’s nickname “Graveyard of Empires” has been well earned.

The future of Afghanistan under the Taliban will almost certainly be based on the most extreme forms of Muslim fundamentalism.  However, there may be some good news here.  The Chinese communists are dipping their toes into the troubled Afghan waters.  Maybe the “Graveyard of Empires” will strike again.

An unprecedented debacle of historic proportions. Now the rats are beginning to desert the mess they created. Biden and his buddies are the face of the new and ever more socialist democrat party. And socialism only leads to one end – dictatorship.

The Taliban continue to mock Biden. They demand allUS troops be out by 9/11. And now there is a picture of Taliban barbarians eating ice cream to mock him further. Meanwhile, good old Joe, is in hiding somewhere in DC?

It is absurd that Biden tries to blame Trump. He has been in office for 8 months and had no problem instantly reversing almost all of Trump’s policies. This debacle is owned by Biden and everyone in his administration.

The Chi-Coms DO NOT mess around. They will do whatever it takes and solve the problem. They do not care about world opinion or mass destruction/murder. Watch and see. The Chinese have ALWAYS thought in centuries while the west wonders what’s for supper.

China would have to go to war against every surrounding Muslim state. If, as you say, and I agree that China has a long view, they aren’t ignorant of the history of the Afghan tar pit.

and this would be a problem for them because…..?

Any American citizen who voted for this corrupt president should hang his or her head in shame.

Why are you commenting on your own article, Doc… again…?

Why are you commenting on his article. You add nothing.