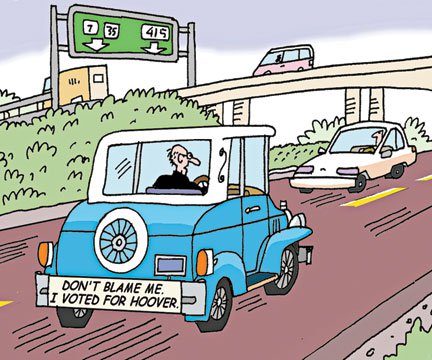 Low-speed missile of the highways

Gray Menace on the Highways

Like all Americans I was grieved to hear, a few years ago, that ten people were killed and a score injured when an elderly driver lost control of his car and plowed through a crowded street market in Santa Monica, California. The next day a newspaper in Washington, DC, proclaimed:

“California lawmakers to take new look at driver safety. Politicians and pundits are saying the law needs to allow for more scrutiny of elderly drivers.”

California radio talk-show host Brian Wilson said (on the air), “’Everyone over the age of 70 is a ticking time bomb behind a guided missile.’”

The Santa Monica crash produced a steady drumbeat of news items about traffic accidents involving elderly drivers. Young fools are still crashing into other cars (and people) at a goodly clip, as always. But the real emergency now is accidents involving older drivers. Pundits have gravely weighed in on the “problem” of the older driver. “Yes, something must be done…” I heard one well known talk-show host say.

A tragic accident morphed into a blitz on older drivers. Suddenly, we must “do something” about these “ticking time bombs.” Objections were either muted or inaudible. The “doddering old driver” profile is generally accepted because people believe it and because those younger than 70 think it doesn’t affect them. Thoughtful citizens of all ages should be disquieted by this.

Where would this story have gone, had the deadly driver been an Asian woman or a young black man, or (heaven help us!) a transgendered person? Calls for “closer scrutiny” of those driver-groups? (Surely, you jest.) Had a soccer-mom been the driver, reporters might have looked into “mechanical failure,” or asked if inexperienced traffic cops let a speeding car get near a large crowd of people. But there were no such questions about the Santa Monica accident. Instead, media and politicians landed with both feet on the driver’s age.

In my wasted youth we “knew” all sorts of things about certain groups of people. Women, for instance, were terrible drivers. (We told endless jokes about them.) Blacks were too technically incompetent to be mechanics, and they could never play pro football because the game was too “complicated” for them. Later, with their gridiron-prowess undeniable, we admitted that they could play, but we knew they weren’t smart enough to quarterback or coach a team. All this was common knowledge in the 40s and 50s. The Washington Redskins – the last NFL team to integrate – had no black players until 1961. (Ha! We always knew those Redskins were racists…)

Why don’t we don’t hear those nuggets of “conventional wisdom” any more? Because they were nonsense. Women are good and bad drivers, just as men are. People of any race can be excellent mechanics. And, of course, blacks now dominate pro football, with no one arguing that they’re not up to it, mentally. Some are quarterbacks and coaches who exhibit a keen knowledge of the game. (Doug Williams led the Redskins to a smashing Super Bowl win in 1988.) Those “profiles” were all childish lies. As a society, we grew up and stopped telling them to ourselves. 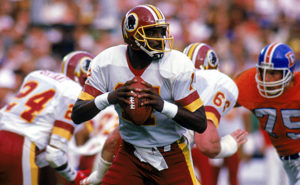 With respect to drivers, what we do know is that there are some genuinely dangerous types – distinguishable mainly by behavior. Several particularly dangerous drivers (world according to me – not a complete list) are summarized below:

(1) The Automatic (zoned-out) Driver: typically talking or texting on a cell phone; includes a complete cross-section of society; can be spotted by signature tendencies: e.g.

(2) The Aggressive Driver (a.k.a. “The Mad Hatter of the Highways”): much publicized in recent years, as police try to stop his/her dangerous tactics of weaving, hair-raising lane-changes, high speed tailgating, rude gestures, threats, and even physical violence. Includes all ethnic and age groups and both genders, but younger people predominate.

(3) The Distracted Driver: often, housewives with carloads of kids. Constant turning toward rear-seat passengers or bending to retrieve baby’s toys is common. High-jinking teens or amorous couples also in this class. Also, drivers with a pet loose in the car. Very dangerous to be near this unpredictable driver in traffic. (I have personally seen men shaving, while driving on the Beltway; also women primping and applying makeup.)

(4) The Timid Driver: the proverbial “little old lady (or man).” But my informal polls place Asian drivers high on this list. (So sue me.) Some are too short to see properly from the driver’s seat. This driver is Brian Wilson’s “low speed missile.” Characteristics include slow, uncertain driving, unpredictable stops, turning corners with agonizing slowness, inability to merge into highway traffic at speed, and taking two minutes (or more) to pass a truck. Stopping at the mouth of freeway entrance-ramps is a hallmark.

(On one near-death occasion I rode with a timid driver. She slowed to a near-stop at every cross-street along a boulevard, although no signals or signs required it. Oblivious to the frantic squeal of tires behind her, she admitted that she feared being broad-sided by a car that might emerge from a cross-street. I told her not to worry – that she would more likely be killed by being rear-ended.)

(5) The Righteous Driver: often seen driving at (or below) the posted speed-limit in the passing lane of the Interstate, with a long line of frustrated drivers following. Causes dangerous maneuvers (and sometimes accidents) by drivers attempting to get past. (I have even seen a state trooper driving like this in the passing lane.)

(6) The Impatient Trucker: typically trying to pass another truck on an uphill grade with a speed-differential of 1 or 2 mph – thus blocking a long line of would-be passers.

(7) The Tipsy (or stoned) Driver: needs no intro; causes half of all fatal accidents. Police-efforts to detect these drivers have been unsuccessful. It is estimated that after midnight, one of every two drivers on the road in the Washington, DC, area is alcohol- or drug-impaired.

(8) The Fatigued Driver: more common than one might have thought. The National Highway Traffic Safety Administration estimates that 100,000 police-reported crashes each year are the direct result of driver fatigue. They cause an estimated 1,550 deaths, 71,000 injuries, and $12.5 billion in monetary losses.

(On the New Jersey Turnpike one afternoon, a car 50 yards ahead of me swerved suddenly from the leftmost lane, careered across all three lanes of traffic, spun around, and ended up on the right shoulder facing the wrong way. It was a miracle that he wasn’t hit. When I stopped to see that the driver was OK, he said he must have fallen asleep. I urged him to stop for a cup of coffee at the next rest-plaza.)

(9) The Teen Driver: by all official statistics, far and away our most dangerous driver – showing that quick reflexes, peripheral vision, suppleness of body, and (apparent) soundness of mind are not enough. The teen-ager’s problem is inexperience and lack of knowledge. He simply doesn’t realize what certain situations mean, and doesn’t understand the limitations of his car or his abilities. As a teenager I had accidents, and my teen-aged children had accidents, because we didn’t know –

Here are published statistics of annual driver-fatalities per 100 million miles for drivers of various age groups:

Elderly drivers obviously become less safe with age. But younger drivers are the most dangerous group. I advocate periodic examination of all drivers, and I agree with calls for better driver-testing – perhaps periodic re-testing. These would be helpful. But we need a wide cast of the net. Let’s defuse all the “ticking time bomb[s],” not just the old ones.

The “dangerous elderly driver” story needs to be demoted from its “conventional wisdom” status before pundits, reporters and politicians make bigger fools of themselves than they have already – or before (as Will Rogers liked to say) a joke turns into a law. 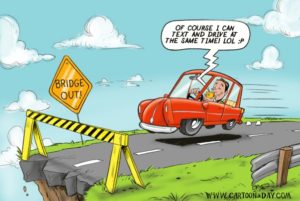 Gray Menace on the Highways was last modified: March 16th, 2018 by Woody Zimmerman

I await the self-driving car. Let the AI robots do their thing.

HA! I wonder if the manufacturers realize that they’ll be sued for every accident.

You are on rte 95 doing 70 mph. You spot a car behaving strangely. You notice a very elderly individual leaning over the wheel who appears to be squinting. —+-++++ You spot a car with no one behind the steering wheel. It is within its lane. Hmmmmm!

Now the question – which do you prefer, the 90 year old driver with cataracts or the AI driver depending on a satellite feed. Also, how old are you – 18 or 80?