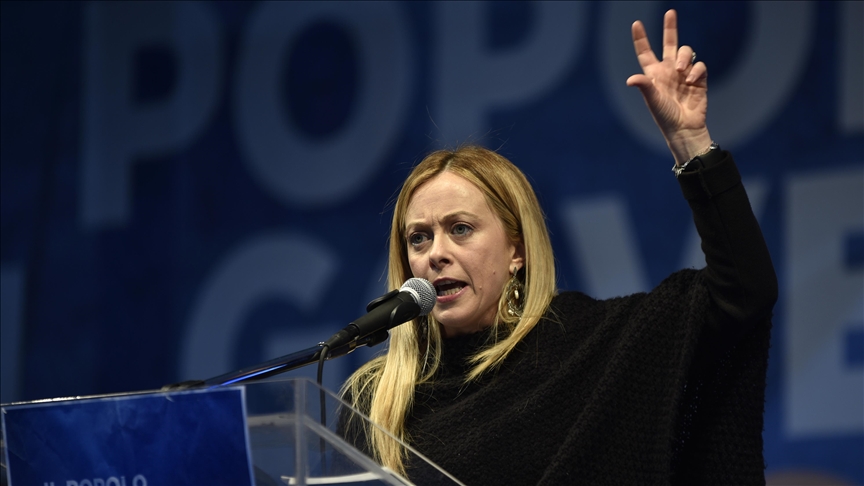 Every once in a while, great oratory ignites the truth.  I am reminded of Churchill’s fighting speech while England was under relentless attack by the NAZIs.  Here is an excerpt from that speech:

“We shall go on to the end, — we shall fight on the seas and oceans, we shall fight with growing confidence and growing strength in the air, we shall defend our island, whatever the cost may be.

It has been a long time since that speech.  But recently there was another reminder that great speeches can move nations.

Thus spake the new Italian Prime Minister, Giorgia Meloni.  But she was even more specific in the clarity of her condemnation:

…”Our main enemy today is the globalist — who view identity and all its forms to be an evil to overcome. And constantly ask to shift real power away from the people to supernational entities headed by supposedly enlightened elites.

Let us be clear in our mind, because we did not fight against and defeat communism in order to replace it with a new international regime, but to permit independent nation states once again to defend the freedom, identity and sovereignty of their peoples…

It means that whether the false democrats like it or not, national conservatives in every latitude are actually the only real Democrats. Because it is only by defending the nation states, that we defend the political sovereignty that belongs to the citizens of that state…”

The lgbtq asked for tolerance and it was given in law. However, you do not want tolerance, you want to dictate your agenda to the overwhelming majority of Americans. You have seriously overplayed your hand and the pushback is happening much to your dismay.

No one . . . not anyone in Italy, the US, or anywhere else, is asking you to give up your identity. What we are saying is simple: “Don’t force your definition of identity on everyone else. Live and let live.”

Yu clearly are not capable of recognizing the hypocrisy in your stand and in the stand of the Republican Party: “KEEP THE GOVERNMENT OUT OF MY BUSINESS . . . but I will decide what health care women can have, I can decide the course of other people’s lives based on how I perceive their identity, and I will use the power of government to force you into my mold.”

She is considered a fascist because she sounds exactly like the most famous fascist of all . . . . and you know where he led the world.

Who is forcing their identity on someone else asshole? Do fundamentalist Christians get to promote Jesus in schools? Do teachers have Bible studies there??? But do we get to push non gender bathrooms on girls? Do we get to allow perverts like the one in Loudoun to molest girls in their bathroom. Cause I identify as a girl? And GFY about that being consensual… the only thing that kept the judge in that little perverts case from a harsh sentence was the victims Mother plead for leniency..
Fascism… Talk about fascism and the fuking Biden Administration keeping those poor J6 trespassers in jail for two years… Seriously… stick your fascism up your ass..

“Don’t force your definition of identity on everyone else. Live and let live.”

LOL – you & the rest of The Radical Left first!

You have to wonder why the righteous brother name. If he is to have the modern democrat socialist name there should be no brother and no righteous. Brother is like mother. Righteous is normally a Jude’s/Christian adjective. These leftist idiots think they are cute but quickly undercut their argument by exposing their agenda. To them,not her, wife, woman and Christian are all to be discarded in a blizzard of pronouns and woke garbage. Despicable people.