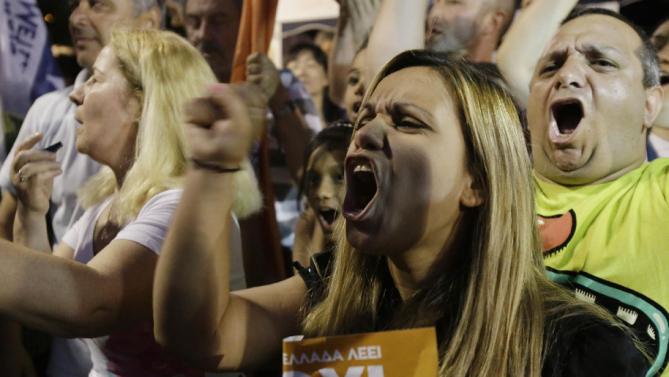 Greece Rejects Austerity Measures, How the Crisis Will Effect Americans

Today voters in Greece overwhelming rejected the austerity measures that the European Union (EU) would impose on them before lending the country more money. Currently the Greek banks are closed because they are without money and it doesn’t appear the EU will blink and give them more money.[read_more]The Greeks express their anger against the EU,

Supporters of the No vote react after the first results of the referendum at Syntagma square in Athens, Sunday, July 5, 2015. Greece faced an uncharted future as its interior ministry predicted Sunday that more than 60 percent of voters in a hastily called referendum had rejected creditors’ demands for more austerity in exchange for rescue loans. (AP Photo/Petros Karadjias)

The liberals in charge,Syriza, want Greece to control its future by pretending to raise taxes.  (I say pretend because one of Greece’s major failures is not collecting taxes while increasing spending on social programs. That’s how they came to where they are now.) With today’s vote 61% of the Greek people have said they want to control their own future. No one knows how that will work since Greece hasn’t been able to raise the money they need to fulfill their debts.  The European Union is calling a halt to the ‘extend and pretend’ program with Greece.

A good quote on the mess in Greece from the Ace of Spades,

Well saying Greece spent a little too much is quite a bit of understatement. When Greece joined the EU, it basically got a credit card with the same limit and interest rate as Germany and then went crazy with it. But it turns out that if you want to live like Germans, you have to actually work like Germans.

So how will the problems in Greece effect us?  There’s good news and bad news. The Washington Post wonkblog has some ideas.

First the bad news, markets around the world are expected to fall when they learn that Greece cannot pay the money that they owe to the EU.  That could effect your 401K,

Markets around the world plunged after negotiations broke down late last month between Greece and its European creditors. The Standard & Poor’s 500-stock index logged its worst day so far this year, falling more than 2 percent. Analysts worried that the turmoil in Greece could signal the end of the six-year bull market in the United States. For those with a 401(k) retirement savings plan, the sell-off was a painful reminder of the volatility on Wall Street during the 2008 global financial crisis.

The good news is, your European vacation just got cheaper.  The Euro is plunging, making your dollar go further.  I wouldn’t suggest a trip to the beautiful beaches of Greece since you can’t get money out of the banks and businesses will be closing across the country. But prices throughout the rest of Europe will be cheaper as the dollar gains against the plunging Euro.

More good news, mortgage interest rates are likely to remain low. After 7 years of low interest rates by the Federal Reserve, the US Central Bank, is thought to be considering an interest rate hike as early as September. But the collapse in Greece may cause the Fed to rethink raising interest rates if our economy slows down because of it.  Read more about this possibility here.

An interesting article about a Greek couple honeymooning in New York are now stranded there because their Greece issued credit cards are useless.

There’s been a run on food and medicine in Greece as the people prepare for shortages.

Can it happen here?   The short answer, yes it can.

Margaret Thatcher was right, eventually you run out of other people’s money. That’s exactly what has happened to Greece and will happen to us if we don’t curb spending.

Up to the minute reactions from around the world here.

I grew up in Cinncinati, a city with a large German population. It is considered improper to generalize about different cultures, but I observed that Germans were frugal, hard-working, responsible, and that they enjoyed an occasional glass of good beer. They struck me, also, as being somewhat unsympathetic to those who were less frugal and hard-working than they. My father told me that banks in Cincinnati, during the Depression, were in fine shape. German bankers, in those days, simply did not make bad loans. As a child, it seemed to me that those qualities often led to success, or at least to avoiding failure.

Now, it appears that Democrats, and especially Big Ears, fundamentally reject frugality, responsibility, and prudence in dealing with financial matters. There will be a price to be paid for that idiocy, as we are not a great deal different from Greece.

VERY well said!! We need to be more like the Germans before we become Greece.

Greece is the family down the street which lives way beyond its means, then is adamant when creditors want to be paid back.

They’ve been bailed out over and over and they still want more but the EU is not likely to give them even more money when they won’t agree to cut any spending on their many social programs. It will be interesting to see how they fare on their own.