Guest Post: Gillespie Should Face Shak Hill in a Debate 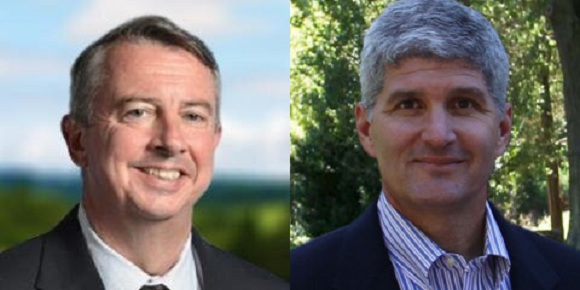 Ed Gillespieâ€™s Conservative claim to fame is that he wrote the Contract for America in 1994.Â  He was Dick Armeyâ€™s right hand man.Â  Then, he became President George W. Bushâ€™s right hand man.Â  As the Manchester Union Leader reported, â€œthe partyâ€™s new chairman [Ed Gillespie], energetic and full of vigor, said in no uncertain terms that the railings against the expansion of federal government are over.â€

Twenty years ago Gillespie made his Conservative credentials.Â  Then, for more than a decade, Gillespie made his big government, deficit spending, crony capitalism, less freedom credentials. Gillespie made it worse when he was the Chairman of the RPV.Â  He supported the unelected regional governments and tax increases for the bogus transportation bill, HB 3202, which was ruled un-Constitutional â€“ unanimously by the Virginia Supreme Court.

If Ed Gillespie is really Mr. Conservative, defend the TARP bailout, his version of Obamacare, and amnesty for illegal aliens in a debate.Â  Why is Ed so afraid to face Shak Hill?

If Ed Gillespie is a consistent Conservative and not just another career politician, consultant, lobbyist, hired gun, and right hand man â€“ like the other guy whose only reason for ever living in Virginia is the commute to DC, Sen. Mark Warner â€“ he should debate.

Ed can explain why his right hand man, John Feehery, who runs his company, Quinn Gillespie Communications, is so rabidly anti-TEA Party.Â  When Ed was a right hand man, he kept his mouth shut and did what he was told.

Do we really need another career politician/RINO in the Senate? We can do better than Ed Gillespie.

How many Congressional debates have there been in the 10th Congressional district race? And Elitists Cantor and Gillespie still not willing to debate their opponents??

Do you have large amounts of money to distribute through a network of influence peddlers?

Or, you know, instead of trying to prop up a candidate that is better suited running for Dog Catcher (preferably in another state than mine), why don’t you just talk to Ed Gillespie yourself? Just since he has announced for Senate I have had at LEAST a dozen separate occasions to speak with Ed Gillespie one on one.

So if you have a question of Ed just ask! Instead of attempting to prop up a failed candidate with even more questions in his background than Ed that we just haven’t asked because no one takes him seriously.

Some people are too good to lower themselves to debate. Just ask Mr. Cantor.

Does the debate held by the VFRW this past weekend in Norfolk in front of hundreds of republican women count? Or just because Ed Gillespie wasn’t skewered by false attacks does it not “count”?

That wasn’t a debate it was a candidate’s forum with four questions. It was a great event however, thanks to the VFRW and Thelma Drake for putting that together. Shak has received more positive comments about his performance in that event than any other. A debate would be like what George Allen did with his primary opponents at least three times around the state.

Actually, I was there, and Shak was the only candidate that launched veiled attacks at Mr. Gillespie, by talking about “distractions”, and making references to failed campaigns as baggage for Mr. Gillespie, such as Mitt Romney’s. Then he proceded to claim “the money is coming for my campaign” and started to rattle off the Senate Conservative Fund, Sarah Palin, Tea Party Express, etc., saying he had secured funds from them. I for one would love to see evidence of that, if in fact it’s true. Every other candidate was positive, gracious, talked about their platform and policy ideas, insead of focusing on attacking the candidate that is clearly ahead: Ed Gillespie.

Backstabbers are always gracious to your face.