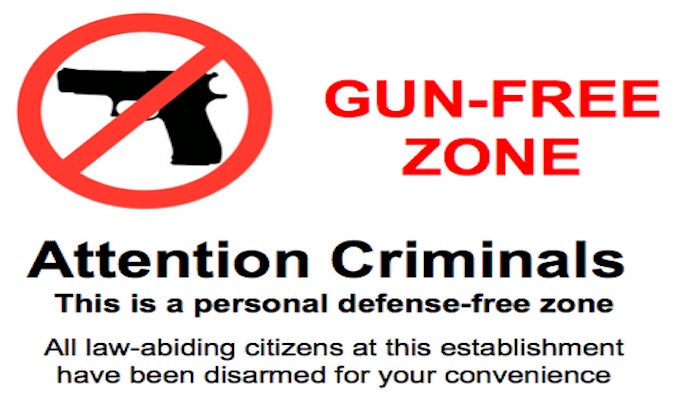 Someone had to say it, for that is the truth.  And while truth may be disparaged in the current public arena, in the end, only it matters.

Telling another free and independent person that they must grovel on the ground, begging for their life, or telling citizens that they must cower before the almighty power of the state, defenseless, is about as immoral and unloving as it gets.  Not to mention completely irresponsible.

For that is exactly what so-called gun “control” does.

You do not have to look far to see very clear examples of this.  From the streets of Chicago, which has some of the strictest gun control laws, yet have seen 2,530 citizens shot, to Venezuela, where only the government has guns and the people are starving, forced to eat their family pets to survive, gun control is not about eliminating guns, but rather who has guns.

And in both of these cases, the politicians and the elite have men and women with guns defending them, using those guns to force the people to remain defenseless in the face of horrible violence. You see, gun control became commonplace in America after the Civil War, where the first major gun control laws were to keep freed slaves from being able to defend themselves against those that wished to oppress them. All around the world, the elite and the political class have guns, they have bodyguards and armies with guns to keep them safe and protected, while the masses suffer.

And even in states such as Virginia, where we have concealed carry permits, this permit process favors the wealthy as well.  Not many in the lower classes have several hundred dollars sitting around to pay for classes and permits when that money can be used to feed their families.

Which is exactly why in the upcoming state legislative session the Virginia Constitutional Conservatives is working to pass Constitutional Carry.  For those that do not know, Constitutional Carry, already passed in 13 other states, restores the 2nd Amendment and allows law-abiding citizens to carry concealed firearms without paying for their constitutionally protected right or begging the government’s permission to do so.

Facts being pesky things, in every single of those 13 states, violent crime has dropped dramatically. That is what we all want, right?

And I cannot think of a more unloving or immoral act than to demand that your fellow men and women are forced to stand defenseless in the face of a madman or to suffer under a tyrannical government with no means of protection. Our founding fathers knew this, for when they adopted the 2nd Amendment private citizens owned warships, armed with cannons, which could kill hundreds in a second. This is exactly why the 2nd Amendment states “arms” not muskets, as well as “the security of the free state.”   So do not waste time lecturing on how weapons today are not what the founders had in mind.

The 2nd Amendment is not for hunting or sport, though firearms serve admirably for both. The 2nd Amendment was adopted to protect our God-given right to life and liberty. Protection against all who wish to do us harm. And working to gut this most basic right is about as hateful as it gets.

There will never be enough police or private bodyguards to protect you, unless you are a politician or rich.  The right to keep and bear arms for the defense of self and freedom is to ensure we all can pursue happiness, regardless of our station in life. We are all creations of a loving God that have been given free will and liberty and the most basic right of having the means to defend these rights.

Many of those who are pushing gun bans ignore the most basic facts: Gun control does not work, gun-free zones are horrible killing zones for the innocent, and forcing free people to ask the government’s permission and to pay for a constitutionally protected right is just plain wrong.

Praying at the altar of government does nothing more than empower government to detriment of the people. And when you look around the world, it is heartbreaking to see people being beheaded in Saudi Arabia, fed to dogs in North Korea, shot for free speech in numerous countries while starved in others — all because their governments disarmed them.

If you truly claim to embrace love, compassion and morality, you simply cannot condone depriving the people of their means to protect themselves, their family, their hard-earned property and, most of all, their God-given freedom.

Which is why, to protect life and liberty, free and independent people must always be armed.

Also published in the Loudoun Times