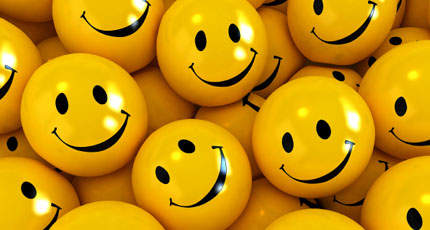 The Happiest Counties in the US

For the second year in a row Loudoun County Virginia ranks as the happiest county in the country, based on a study completed by AOL.com.  Loudoun is number one with both unemployment and poverty rates below 4%. Loudoun also has a higher than average marriage rate.

Fairfax County ranks second in this study with a high median income and a life expectancy of 83.  The county is larger than 8 states and Washington DC. 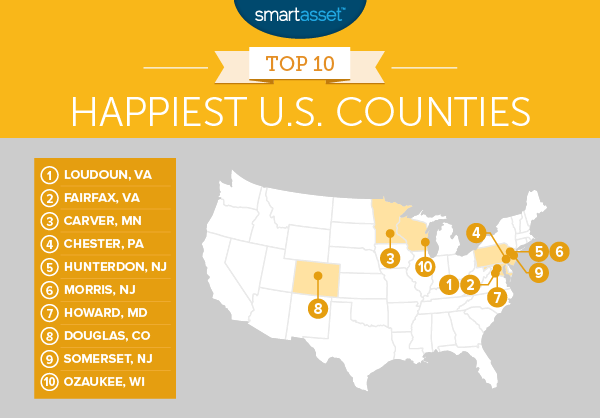 The Happiest Counties in the US was last modified: May 28th, 2016 by Jeanine Martin

Loudoun and Fairfax are the happiest counties? Well perhaps if you are enamored with unbounded acres of poured concrete, endless miles of useless, repetitive strip mall sprawl, overburdened transportation systems and endless hours spent in traffic jams contemplating the joy of your outstanding quality of life. Those of us living miserably here in Clarke County enthusiastically support all of you to move to Loudoun and/or Fairfax, it’s nirvana, REALLY! Here in Clarke, please forget us, nothing to do anyway, only one way in and those mountains you have to cross almost insurmountable not to mention those zoning regulations, so cruel. Horrible, horrible avoid that place at at all costs, please.

Hey, I live very near you in western Loudoun and it’s nothing like you describe, although our taxes are outrageous.

Don’t worry eastern Loudoun will be coming to your northern Loudoun pocket at some point. You don’t really believe running the developers off the Loudoun board ran them out of the county do you?. The Dulles corridor out towards the airport will see continued expansion next but I agree they aren’t very interested at this point in Lovettsville or Point of Rocks. You realize you live in a northern Loudoun bubble, right?

The change in far western Loudoun County has been major over the past 20 – 25 years. Twenty-five years ago Leesburg was a village, Purcellville was a small village, Round Hill you passed without a notice. Today major developments ever where including large condominium complexes. Rest assured the western Route 7 corridor is on the future development menu.

Happy to remain in my bubble until we move to Clarke. Many friends planning on retiring and doing the same. Look out Berryville!

oops, I guess I screwed uo my disinformation post.

I lived in Clarke 30 years ago. Great place. Battletown Inn squash was a favorite treat for me. Heard that the Inn was closed down a month ago. Great sadness.

Jeanine – I don’t see how the factors used in this survey of counties have anything to do with “happiness.” But, you are right about Northern Virginia (to include my Stafford County). We are doing exceptionally well due to federal largesse. But that “happiness” will not last forever. As Congressman Brat has warned, in a mere 14 years we will have reached the point where every tax dollar raised will go for entitlements (all Baby Boomers will be on SS and Medicare) and servicing the debt, with no funding left for defense and discretionary income.

We won’t make it that far, history dictates otherwise.

Rocinante – we will reach some sort of arrangement and it will ugly and divisive, and everyone will be called on to “sacrifice equally.” It will mean reductions in Social Security, Medicare, Food Stamps, WIC, AFDC (or whatever it is called these days) welfare, Section 8 Housing, SS “Disability”, etc. It will pit natives versus immigrants, and old white people against young brown people. That same government which has brought such unbridled “happiness” to northern Virginia, will be the bearer of despair and division. End of story.

Both Loudoun and Fairfax, and other NOVA counties are doing very well because of federal government money. That’s what makes them wealthy, the government.

Hmm, both NoVA and both liberal, highly-taxed, D.C. suburbs, eh.

I wouldn’t say Loudoun is liberal. For 35 years we’ve had a Republican representing us in Congress and the county voted for Romney, not Obama.

What measurement did they use – just economic? Everyone I know in Fairfax Co. anyway is stressed out, angry, and just wants to make enough money so they can retire somewhere else. As for Loudoun, I do not live there, but it seems I hear a lot about how it was once a pastoral paradise, but is now coping with maddening traffic congestion, a loss of quality of life, and increased crime.

Read the link for how the survey was done.

I always say it’s bumpy in the second.