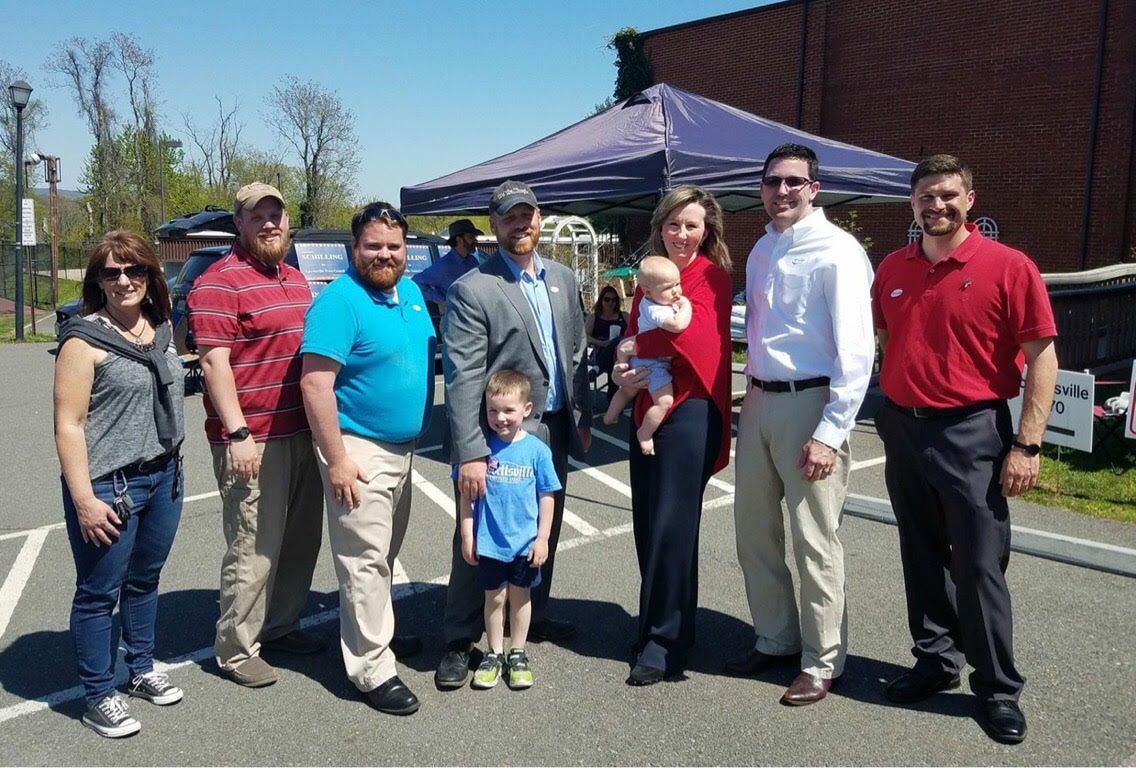 Congresswoman Barbara Comstock with some of Lovettsville's election winners, the author is second from right

On Tuesday, Republicans had strong wins across Loudoun County.  We did it the old-fashioned way – hard work, being engaged in our communities and bringing together strong coalitions committed to our constituents.

In Lovettsville, I was honored to win my Town Council seat with 95% of the votes cast in the special election.  Our Mayor-elect, Nate Fontaine, also had a landslide victory, winning 77% of the vote.

I focused on both the immediate needs of our community, looking at external resources for infrastructure including our streets, utilities and telecommunications. These are burdens that few small towns can or should bear alone, and I will continue to look for innovative and sustainable funding. Keeping our town rural and attracting appropriate economic activity to diversify our tax base are two of the key issues I heard about and spoke to during the last few months.

In Middleburg, Bridge Middleton similarly had a landslide victory of 67% despite strong Democrat involvement in supporting their nominee who did not even break 30%, and a third party candidate who received 3% of the vote.  Chairwoman Phyllis Randall, State Senator Jennifer Wexton, and Delegate Wendy Gooditis all weighed in for the candidate who lost.  In Purcellville, Republicans gained a Town Council seat.

Last year when Republicans lost elections, we were told that this was a sign of things to come. Yet when we won elections this year, the first response from many in the media is – nothing to see here, move along!  Those of us on the ballot know better.  We focused on our communities and the kitchen table issues that our constituents told us were their priorities.  We talked about common-sense, conservative solutions such as lowering tax burdens to respond to their concerns, and our communities responded.

I want to particularly thank our state and local officials who worked closely with us including our state Delegate Dave LaRock, our local Supervisor, Geary Higgins and former Delegate Randy Minchew who was a great help in Middleburg.  And given it is still an election year I want to also thank our Congresswoman Barbara Comstock who helped our candidates with voter resources, tools, and volunteers to effectively connect with our friends and neighbors.  She came to our meet and greets, provided financial support and on Election Day she came to our polling places to stand by our side visiting with constituents.

We worked together as a team to make sure our local communities knew they had positive choices on the ballot with engaged candidates who are knowledgeable about their communities.  Barbara understands we need leaders who bring people together to find common-sense solutions and who work hard on behalf of their constituents.

Like our winning candidates on Tuesday, Barbara has similarly focused on kitchen table issues – passing tax relief for our families and businesses; reducing burdensome and duplicative regulations on our businesses; protecting our communities from the scourge of heroin and opioids, gang violence, and online predators targeting our children; supporting our veterans and rebuilding our military and national security.

We appreciate her work to provide the most significant tax reform passed since the Reagan Administration which is already helping working families. The doubling of the child tax credit and across the board tax rate reductions will dramatically improve the financial picture for the vast majority of Americans. Here in Loudoun, according to a County sponsored study, an average family of four will realize tax savings of $1,782 under the Tax Cut and Jobs Act that has passed.

We in Loudoun are also following that lead, reducing property taxes at the county and town levels. This is the sort of leadership our voters are responding to in overwhelming numbers.

Barbara also understands that we need to do more for our Veterans and she has worked and voted for reforming the Veterans Affairs Administration. For any of us who have served, we know the VA can be a critical lifeline to acute care which might not be available or affordable elsewhere. Barbara worked to get a new Veterans Center in Leesburg to better serve veterans and has a full-time veterans advocate in her office.  This Center is a tremendous asset to the many Veterans who live and work here.

As the successor to our longtime Congressman Frank Wolf, Barbara has engaged the entire district with common-sense, conservative solutions with continued support and endorsements from our conservative organizations such as the Pro-Life Susan B. Anthony’s List, NFIB, and the National Rifle Association.

And it is no surprise that given her close working relationship with our state and local officials that Barbara has earned the endorsement of all of our Republican elected Loudoun County Supervisors and County wide officials.

Finally, Barbara has the distinction of having received more votes in the 10th District than any Republican or Democrat for any race, either Presidential, U.S. Senate, or U.S. House, with a total of 211,000 votes in 2016. The only exception was her predecessor, Frank Wolf, who in 2012 received 214,000 votes.

Let’s stick with our winning formula!  Join me on June 12 in the Republican primary and vote for our Congresswoman Barbara Comstock.

Mike Dunlap is a member of the Lovettsville Town Council and lifelong conservative, previously serving with the staff of seven Republican Members of Congress and countless campaigns. Mike is also a Member of the U.S. Navy Reserves and is the Director of Government Affairs at the Keys Group, LLC. His views expressed here are his own and are not endorsed by the Department of Defense, the U.S. Navy or the Town of Lovettsville.

Excellent analysis and article Mike Dunlap! And congratulations to all the Town Council and Mayoral winners last Tuesday.

Reply
Hard work and engagement wins - Barbara Comstock for Congress May 6, 2018 at 3:20 pm

Barbara is going down to defeat. Having the moniker as worst Republican Congresscritter is not a badge of honor. Mr. Dunlap has succeeded in making a pigs ear look like a silk purse with Comstock comments, get real!

Which of our Republican Loudoun town candidates was Team Shak helping?