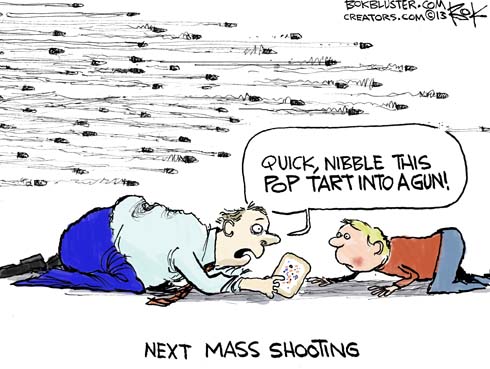 Have We Lost Our Minds?

Anne Arundel County, MD; May 3, 2013 – a boy, age 7, was suspended from Park Elementary School after school officials said he chewed a Pop-Tart into the shape of a gun.

Philadelphia, PA; December 2004 — A 10-year-old girl was handcuffed and taken to a police station because she took a pair of scissors to her elementary school.

School district officials said the fourth-grade student did not threaten anyone with the 8-inch shears, but had violated a rule that treats scissors as potential weapons.

Administrators at the school said they were following state law when they called police. Police officers said department rules required them to handcuff Porsche Brown and take her away in a patrol wagon.

Police officials later decided that the girl hadn’t committed a crime and let her go. But school officials suspended her for five days. Administrators scheduled a hearing to decide whether she may return to class or be expelled to a special disciplinary school.

School district officials have promised a crackdown on unruly students this year. New policies give administrators the power to expel students for infractions as minor as violating the dress code, chronic tardiness or habitual swearing.

Administrators say the steps are needed to regain control over a notoriously unruly school system, but some parents have complained that discipline has been overly harsh and that school officials have been too quick to call police about minor problems.

Gretna, LA; December 11, 2004. A fourth grader was suspended because traces of alcohol were detected in “Jell-O shots” she brought to school. But a school official said it could have been the result of natural fermentation.

School board president Gene Katsanis said the gelatin cannot be retested because it was not refrigerated after being discovered in the student’s book bag last month. “It will always remain a mystery,” he said Friday.

The 8-year-old girl took the gelatin to school in small containers similar to those used by bars that serve liquor-spiked Jell-O. The girl’s gelatin was made by her mother, Adrienne Noble, who works in a French Quarter bar that serves alcoholic Jell-O shots.

Miss Noble has insisted that the gelatin never contained alcohol. She said the containers were innocent treats for her daughter’s classmates.

However, the girl was suspended for nine days because of a rule against possession of materials that appear to contain alcohol.

Allentown, PA; 1958. A 16-year-old male student brought a knife, a rifle, and ammunition into Allentown High School and placed them in his locker. He attracted no attention. Later that day, the student removed the weapons and left the building without incident. No crime was subsequently reported.

I sat one seat behind that student in 10th grade homeroom, sixty years ago. Reggie was a rough, woodsman kind of guy who lived on the east side of town, down by the river. While my buddies and I were playing ball and chasing girls, Reggie was fishing, hunting rabbit and squirrel, and trapping muskrats. One day he showed up wearing a reeking coat because a skunk caught in one of his traps had still been alive. He rode a public bus to school, and sometimes brought his rifle along so he could head for his hunting grounds after school. This caused no alarm among school or transit authorities. Nothing like this would be remotely possible today.

Reflecting over these incidents from both the recent and distant past, I wonder if somehow the country – particularly public education – has lost its collective mind. I’m forced to conclude that it has, at least in matters of discipline. What seems to have been lost is the skill of discernment. This $2 word means being able to tell one thing from another – e.g., important from trivial, harmless from dangerous, or true from false. There was a time when educators could do this, but those more recent incidents cited above suggest that they no longer can. An example might illustrate how discernment used to work.

In mid-March 1959 I returned to school after my grandfather’s funeral to find a note asking me to report to the assistant principal’s office. The AP was Mr. Fatzinger. We all knew who he was, but no one wanted to see him, personally. The Big F was the Hammer – the tough guy who knocked unruly vo-tech guys around and slapped high-jinking jocks upside the head. He wasn’t a big man, physically, but he was fierce as a lion – bald, red-faced, and intimidating. (In retrospect, he bore an uncanny resemblance to Principal Strickland in the film Back to the Future.) His voice carried a city block. He was, shall we say, pre-Miranda in his disciplinary style. You didn’t want to cross him. My circle kept out of his way. I couldn’t imagine why he wanted to see me.

When I came to his office, Mr. Fatzinger was out of character. He spoke, not in his Führer-voice, but as any ordinary person would. He had seen the notice of my grandfather’s death and wanted me to know of their acquaintance, during his own boyhood, when they were neighbors in a rural suburb of Allentown. He said what a fine man my grandfather was, and how much he was liked and respected by all of his neighbors.

Naturally, I had no idea that Mr. Fatzinger had a past connection to my grandfather. After he reminisced briefly about life in Allentown, circa 1918, we parted with a handshake. He offered his condolences to my family for our loss. I never spoke personally to him again, but the incident has stuck in my mind over the years since.

I recall it now because it showed something important about educators of that era. In a huge high school of 3,000 students, Mr. Fatzinger knew his students. He knew the cut-ups and the pranksters, and who the real bad guys were. And he knew the serious students. I was one of the latter. Mr. Fatzinger never bothered us because he knew we were not a problem. This was why Reggie bringing his hunting gear to school attracted no attention. Mr. F knew him, too.

Mr. Fatzinger had discernment about students and situations. He treated students according to the degree of respect they had earned by their previous actions. You could get on his bad-list, but not very easily. You had to work at it. Largely because of him, we never had a shooting or a knifing at school while I was a student. The police were never called to take anyone away in handcuffs. Whatever arose, Mr. F handled it. And I very much doubt if he had to refer to a list of regulations for the actions he took.

Today, all that is changed. Discernment is obviously in very short supply, and guys like The Big F are scarce. Very little thinking seems to be going on in matters of discipline. In the reports cited earlier, notice how school officials used rules and state laws as justification for draconian actions that were so far over the top as to look absurd. Doesn’t this sound a lot like “Ve vere chust following orders”? Is this the best we can do?

Is there anyone left who can stand up and say: “I don’t care what the regulations say. Stuff the regulations! We’re not calling the cops to arrest a 10-year-old girl over a pair of scissors.”? Who in the world makes rules like these? I’d like to ask them what they think they’re doing. All kinds of explanations and excuses are vouched for these and similar cases, which seem to appear regularly. Educators say:

But it all boils down to an absence of real thinking. We lack discernment. We don’t know dangerous from harmless, or one student from another. We treat delinquents like model citizens and good students like bums. We elevate silly incidents into crimes, but our obeisance to “diversity” prevents us from recognizing when a real crime is forming up.

Those kids who eventually shot up Columbine High School in 1999 went around dressed like Death the Avenger. They stuck out like a sore thumb. A child could see that they were beyond weird, yet nothing was done because their diversity had to be respected. Mr. Fatzinger would have been on their case all the time because he would have recognized that they were dangerous.

Wisdom was also in very short supply at Virginia Tech in 2007 when a deranged student named Cho Seung-Hui shot 28 students and 4 teachers to death, and wounded 30 others, before killing himself. Cho was a bomb waiting to go off, but misguided laws and conventions prevented wise action to counter the threat he posed. His writing assignments contained grotesque violence. Students in his classes feared him and had discussed whether he could become a “shooter.” Teachers had relayed their concerns about Cho, but officials saw no legally justifiable way to deal with him. Expulsion was rejected, as it might have violated his First Amendment right of “self-expression.” When the bomb finally went off, educators sadly wondered what had happened to our society. But I heard no mention of how well Cho’s right of self-expression was protected.

Guys like Mr. Fatzinger were great educators because they were tough, courageous, and wise. They operated in an environment that allowed those qualities to flourish. I and millions of students of our era benefited from what those educators were empowered to do to keep our school safe and under control. Mr. F is gone now, so he can’t see these reminiscences and he won’t know what a place of honor he holds in my memory. Without his wise governance of our school, my life might not have been as full and successful as it was. God bless him.

I believe we have little hope of reforming and improving our system of public education until we rediscover how to re-create that environment and grow educators of that stature again. I don’t pretend any expertise in how to do this. I only know what we once had, and know that we need to regain it. If common sense can be taught, we might start there. It’s worth a try. 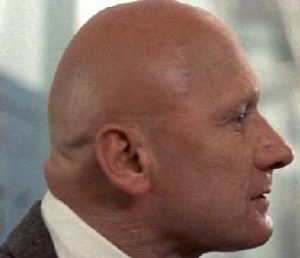 James Tolkan as Stanford Strickland in Back to the Future

Have We Lost Our Minds? was last modified: January 16th, 2019 by Woody Zimmerman