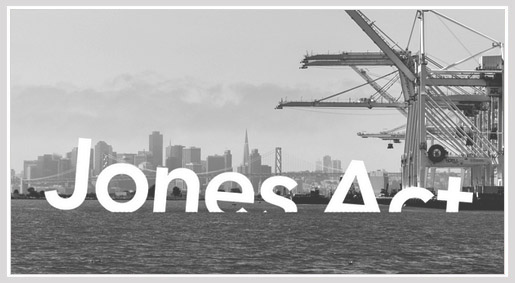 The Jones Act requires trade between U.S. ports to be carried in American built ships with American crews.  This 1920 piece of protectionist legislation raises the cost of shipping between Puerto Rico and the mainland, making it harder for the island to compete. [read_more]

These changes would lower transportation costs in many markets.  While there are many other regulatory changes that would benefit Puerto Rico (e.g. lower the minimum wage), abolishing the Jones Act would help the entire country.  The Jones Act benefits a small number of people who are involved in the various aspects domestic shipping, but raises costs and  diminishes economic growth for the rest of the country.  Will any Republican candidate embrace this obvious way to demonstrate a willingness to help Puerto Rico by reducing the federal regulatory burden with the elimination of the Jones Act?

[…] are dying because of the Jones Act.  We have previously written about the Jones Act and how bad it is. Now 33 Mariners, 28 of them Americans, were killed because they were in a ship built in in the […]

Lobbyist. Get a life bloodsucker.

Do not believe him. Do not repeal nothing.

Remember all those oil wells off the Virginia coast? How about all those jobs the politicians said we would get if we opened up the Atlantic to oil and gas development? Guess who would end up with all those jobs along with the drilling rigs and gas haulers? The Jones Act goes, so do the jobs.

Oh so lets have an anti-Free market monopolistic racket like the Jones Act to “protect” jobs while it drives up the cost of energy and goods for everyone else. So lets have protectionism for every occupation everywhere and no competition. It is the Jones Act that artificially drives up salaries (just as monopolies do) and drives up the cost of delivery of energy to others. Get rid of this Socialist law that has done nothing but protect the phony-baloney jobs of socialists who could care less of the affect is has on consumers, especially poor people

If the Jones Act is canceled and the maritime and longshore unions are allowed to continue to operate, the U.S. will have NO merchant fleet and that is a national security issue.

While eliminating the Jones Act will probably reduce the US flagged merchant fleet if current union rules are retained, the impacts on national defense would be minimal. DoD could charter foreign ships as it did in the Gulf War buildup. Of the 191 dry cargo ships chartered by DoD, 162 or 85 percent were foreign flagged. Given the costs the Jones Act imposes on U.S. commerce, DoD could more economically enter into long term leases or purchase vessels it feels it needs.

Another point – if the military is uses the US flag ships engaged in domestic shipping, how do Hawaii, Alaska and Puerto Rico get goods to and from the mainland?

In the event of a major war, the U.S. should not be dependent upon use of foreign vessels which may or may not be either available or willing to support U.S. defense needs anymore than we should be dependent on foreign airlines or foreign military forces which may or may not be allies. Needs of Puerto Rico, Hawaii, and other islands would be allocated shipping as befits the overall defense needs. The CRAF program gives the DoD priority use of U.S. airlines in case of need in wartime. I realize that Congress has not declared a war since 1941 and the U.S. has cobbled together exigency plans to meet combat needs. It has not been a raving success. When we decided to bomb Quaddafi in retaliation, we could not get overflight rights needed for the most direct attack path and had to use all our air tankers to enable our bombers to fly around a circuitous route. That is just oneexample of the false sense of security engendered by reliance on others who may not be reliable when the time comes.

It will reduce the US-flagged fleet regardless of whether the union rules are retained – a significant portion of the Jones Act fleet is non-union.

The Gulf War buildup is exactly why we shouldn’t get rid of the Jones Act. It was a farce. We didn’t have sufficient assets to get our troops and equipment to the field quickly and we paid through the nose – and that’s when the ships were willing to enter the combat zone. Many weren’t. We had to break out the National Defense Reserve Fleet and call 70 and 80 year old mariners out of retirement to crew World War II era ships because we didn’t have the capacity.

The military doesn’t use Jones Act vessels, and the ships aren’t the issue. The trained crews are the issue. Having peacetime maritime jobs, including in the domestic industry, make it possible for us to surge when necessary in war time. We’re already facing a mariner crisis, this would make it worse, with little appreciable impact on Puerto Rico’s economy, other than costing them even more jobs. The Jones Act protects Puerto Rican jobs as well.

Anybody who tells you they know that the ending the Jones Act in Puerto Rico will help the Puerto Rican economy is somebody you can immediately write off as not knowing what they’re talking about. GAO studied the issue and said it was highly uncertain what the impacts would be on Puerto Rico. Fortunately, we know what the impacts would be on American jobs and national security, and it would be extremely bad. Not worth the trade off at all.