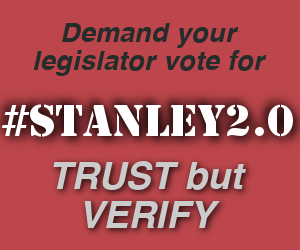 Back on January 20, senior Republicans in the House of Delegates took to the floor to blast Gov. Terry McAuliffe for having invoked “emergency powers” to enact limited healthcare expansion. As the General Assembly considers this year’s budget, they should make sure he can’t do that again on a broader scale.[read_more]

UPDATE: After much discussion among a largely sympathetic Senate GOP caucus, no amendment was offered for a vote. Like I anticipated below, much of the resistance had no real basis. Some more thoughtful Senators feared the legislative intent implications of challenging the Stanley Amendment (i.e., that if they try too hard to correct something, they admit that it’s a problem). As I wrote below, if we ever get to a point where we’re arguing legislative intent, that means we’ve already lost. But more importantly, I don’t think legislative intent is a credible argument when deployed against language that is so plain in its operation.

We’ll have one more shot at this after the budget conference committee, but there is an awful lot of momentum behind leaving this loophole open. Stay tuned.

ORIGINAL POST:
Last June, when Republicans led by Sen. Dick Black (R-Loudoun), Sen. Bill Stanley (R-Franklin), and Sen. Richard Stuart (R-Stafford) successfully stripped the Governor of any authority to surreptitiously expand Medicaid, the Governor vowed that he would find a way to get it done. At the time, he directed his Secretary of Health and Human Services Bill Hazel to develop a plan to do what was possible under the circumstances to close the “coverage gap.”

The administration unveiled their plan in September. Called the Governor’s Access Plan, or GAP, the new program aimed to provide new healthcare assistance to up to 20,000 Virginians with serious mental health issues and no insurance. Because of the measure adopted by Republicans in June (in what is known as the Stanley Amendment, named after Sen. Stanley), McAuliffe could not access funds authorized under Obamacare for this project, and had to rely on other funding mechanisms to accomplish his goal without interference from Republicans in the General Assembly.

He succeeded. In January, even as they lamented the Governor’s abuse of his power, Republicans conceded the goal of the GAP program was worthy, and acted to legitimize it and fix some of its problems in this year’s budget:

House Republicans challenged the governor’s invocation of emergency powers to enact a program without legislative approval or an explicit appropriation.

The promised House plan would address a political vulnerability for Republicans, who blocked McAuliffe’s attempt last year to expand health coverage to uninsured Virginians under the Affordable Care Act without producing an alternative plan.

The fact that the Governor circumvented the legislature to act on his number one campaign promise (to “close the coverage gap” by expanding Medicaid) should come as no surprise. McAuliffe and Secretary Hazel have been asserting such authority for a long time, which is why the legislature should act this session to ensure he doesn’t try the same thing on a larger scale: full expansion of Medicaid under Obamacare.

But wait, you ask, how can the Governor get around the Stanley Amendment? Doesn’t it act as an absolute bar on the Governor expanding Medicaid under Obamacare?

The answer is simple: it did act as a bar when it was passed (which is why the Governor was limited to just undertaking the GAP program), but because of the way it is worded, it is not clear that it any longer does. Here’s the text:

That notwithstanding any other provision of this act, or any other law, no general or nongeneral funds shall be appropriated or expended for such costs as may be incurred to implement [Medicaid expansion], unless included in an appropriation bill adopted by the General Assembly on or after July 1, 2014.

(Emphasis added).  After a quick read you might be tempted to conclude that this is a pretty strong prohibition on Medicaid expansion without specific authorization by the General Assembly, but you’d be wrong. All it does is say that no money can be spent unless it is “included” in an appropriations bill passed after July 1, 2014—it does not say “unless specifically authorized by,” only that the funds be “included” in such a bill.

When the current budget bill passes, we will have had two appropriations bills passed since July 1, 2014. Current projections show state revenues above forecast (no surprise there), meaning there will be significant amounts of unexpended cash sloshing around state coffers that were “included” in one or both of those appropriations bills. As we’ve previously written and as the administration itself has demonstrated, the Governor is endowed with “emergency powers” and certain other authorities to transfer unexpended funds between different accounts and even to make appropriations in certain circumstances (e.g., when the funds are expended to affect the “health and safety” of Virginians).

That’s why the Stanley Amendment needs to be updated NOW to ensure that the Governor does not attempt to exploit any loophole that may exist for him to thwart the will of the General Assembly.  Terry McAuliffe’s track record suggests HE WILL attempt Medicaid expansion on his own. Unfortunately, as drafted, the Stanley Amendment is not as strong as it could be in stopping that. Instead, it should be amended in a very simple way.

All it needs is for one single digit to change.  Instead of Medicaid expansion being prohibited unless done with funds “included” in appropriation bill adopted July 1, 2014 or after, it should be prohibited unless done with funds “included” in a bill adopted at some point after this session concludes.  In other words, instead of the current language that reads “on or after July 1, 2014” it should read “on or after July 1, 2015.”

I have spoken with a lot of members of the General Assembly about this.  Uniformly, the reaction has been really positive, right up until they start talking to other legislators and begin getting pushback from those who don’t want to see this fix made.  Apparently there are some powerful legislators who don’t feel it is an important thing to stop the Governor from expanding Medicaid.  Huh, who knew?

These critics of any attempt to block the Governor will say that it’s “not necessary,” and that current law does not grant the Governor authority to expand Medicaid.  And they are absolutely right.

But unfortunately the question isn’t about whether we think the Governor has the authority to act.  After all, we just saw him act beyond his authority with the GAP program.  Instead, it is about whether the Governor thinks he can get away with it.  In that sense, acting now to vindicate the authority of the General Assembly, and to close any conceivable loophole available to the Governor, is absolutely necessary.

If we’re right, we will have potentially prevented a massive usurpation of legislative authority, and probably the largest single entitlements expansion in Virginia’s history.  But if we’re wrong, it’s no skin off anyone’s nose.  Seriously…although I maintain this action is necessary, even if it isn’t what’s the risk of wearing a belt with your suspenders?  If you’re a member of the General Assembly, why take the chance, especially now that you know the risks?  Are you willing to take the blame for not acting to stop the Governor when the downside to doing so is essentially non-existent?  We will find out soon enough if you did what you could to address this threat, or if you ignored the warnings and were complicit in the expansion of Medicaid.

Unfortunately, I’m not holding my breath on that one.

p.s., I write this realizing fully that I’ll be the subject of attacks attempting to demean me and my motives and the quality of the analysis.  Been there.  Done that.  Not worried.  I’m not worried about my credibility because I’m right.  I’ve gotten too much confirmation of that from various sources to be distracted by ridiculously patronizing arguments that get thrown up in response to my efforts.  If I’m wrong, I’ll be the first to apologize.

Until then, regarding critics who may say that an amendment like I’m proposing above actually weakens the bar on Medicaid expansion: with all due respect, that’s absolute rubbish.  I didn’t fall off the turnip truck just yesterday, and fully expect that pro-Medicaid expansion legislators (especially certain retiring Senators) would like people to believe black is white and white is black and that strengthening the language actually weakens it. Your constituents didn’t send you to Richmond to fall for such an insultingly transparent dodge, so please don’t.  Instead, please recall that the same people making these arguments today made the same arguments last June.  Subsequent events will prove them wrong, just like last year.

With respect to arguments about not wanting to demonstrate any disagreement about legislative intent, I can respect that, but let’s be honest.  If we’re in a situation where we’re making arguments about legislative intent, that means the Governor has already expanded Medicaid.  Play that scenario out in your head for about 10 seconds and you’ll realize that by that point, the people and the General Assembly will have lost…permanently.