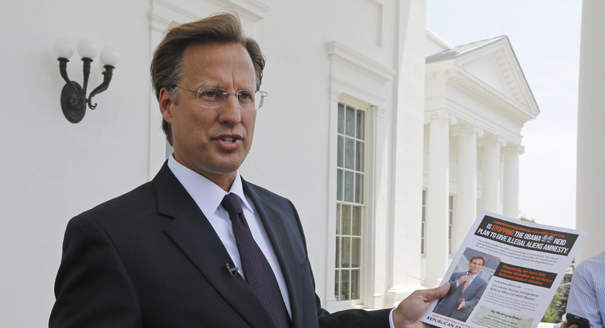 I am at the Heritage Action Summit in San Antonio, Texas. Over the last year I have been worried about the populist political pornography on display in our presidential campaign. What I saw today, by contrast, was astute, thoughtful, intellectual and conservative brain candy. Virginians who are not fond of Congressman Dave Brat may want to retreat to their safe space, lest I trigger them with the information to come.

Before I talk about what happened today, let me talk about last night. I met with hundreds of activists around the country who agree and disagree with me. There are a Trumpkins here. Ben Carson fanatics. Ted Cruz loyalists. Rand Paul fundamentalists.

What can we talk about besides the election of Donald Trump? OK the weather here is fantastic if you hate the cold, but politically, eventually, we all talk about Trump. We’re all hoping this works out to our collective conservative and constitutionalist advantage.

This morning began with a segment with Russ Vought, the VP of Heritage Action. In reference to the election he reminded us that we “ignore the American People at our peril.” He said, “For those who want to ignore the Trump voter, how’d that work out for you?” For those of us critical of this populist uprising he explained that “we must focus on the constitutional obligations” and to remind the people of the principles upon which America was founded.” He encouraged Heritage Action members to be the principled center of leadership for the populists and “the people.”

He encouraged “Constitutional Populism” and policy objectives that lead to empowering the people to ward off tyranny. He reminded us that Statesmen (people of a political persuasion who hold good governance as our goal) have a responsibility to all of those who look to us for leadership and information.

He talked about the convictions our country needs to move forward, and people of character who know how to build coalitions. Character, as he explains, is the difference between people’s willingness to follow us and join us, and the people who can write us off as hypocrites. He argued that Heritages’ Sentinels are an army of activists willing to promote good policies.

I don’t have the video yet, but Ryan Anderson gave a speech that served as brain candy for every political nerd in the room. Honestly, I don’t know how many of us there were, but I was one, and I was blown away by his advice and analysis. Â Federalism, republicanism, and constitutionalism were all explained, hashed out, brought into context and relevantlyÂ explored. Life, happiness, and property were explained. This is the speaker every Republican organization needs at every event. If you have to fight over him, in this case only, the ends justify the means.

The next speaker was Dr. Dee Allsop. He explained to a room of passionate, intellectually gun-slinging activists that the battle for hearts and minds wasn’t about political parties, but about ideas and values. Public policy is important, but connecting those policies to the real lives of real people was the trick. He talked about growing the economy and keeping America secure. About restoring honesty vs. social or moral issues, creating jobs and healthcare, and immigration reform in language tested by research, not ideology. He talked about data analysis and word equity, the will of the people vs. ignoring the will of people. He discussed using taxpayer funds to save insurers vs. promoting industry.

In reference to our Congressman Dave Brat, he said, “I had a Congressman to my left,” pointing to Brat, “and it’s maybe the only time he’s to my left.” Obviously Dave Brat is forming a reputation as one of the more “conservative” members in Washington. Later in the evening Congressman Meadows referred to Waverly Woods and the Virginia delegation as “constituents” that would never be mistaken as being to his left.

Dave Brat talked about how, while Donald Trump may be our next president, it is still harder than ever to beat an incumbent Congressman. He referred to himself as lucky. He wasn’t lucky though. He had us. He talked about how new Congressman (as well as their people) are told that now they must “unify,” “compromise,” and “govern.” He spoke about Speaker Ryan’s “A Better Way” as being something quite positive for the party, but explained that this was absolutely not what this presidential campaign was all about. This campaign was about “immigration, trade, and draining the swamp,” and that he wasn’t going to support Speaker Ryan or anyone else unless they got behind the movement Donald Trump created.

Warren Davidson, who out of nowhere stole ex-Speaker John Boehner’s seat in Congress, talked about how the fruits of Marxism was scarcity. He talked about how as a young soldier he was stationed in Germany and saw the Iron CurtainÂ come down. He described the media as the new Iron Curtain—the “Iron Media”—and explained how that media works.

And why not? Have they even tried to be fair?

I believe we need a set of intellectual and philosophical propositions upon which to base this revolution. Thus far, in this activist escapade, Ryan T. Anderson has best explained my reason for being, for writing, and for acting. My supervisors in Caroline County know me and what I want and they want me to keep up. I’m in a position that most of you are not. My politicians want to make sure that I am conservative enough, educated enough, astute enough to support what they are trying to do. They want to make sure I am conservative enough for them.

We are not yet facing such pressure from our Commonwealth and federal governments. We should.

And for many of our readers, who do not hold federalist, republican, and conservative principles as the end of their means, invite me to come speak with you. I have many friends who view us a threat to the Republican Party and there are many reasons for us to disagree. I want to make my case.

I’ve heard this story before… like the last time Republicans were in charge. Sorry, there’s nothing left to get excited about from these folks. Maybe if elected Republicans actually govern/legislate/lead like they campaigned they’ll be worth listening to. Until then, I’ll just watch what they do and wait for the impending disappointment.

Ouch! Lucy and the Football, Groundhog Day all over again.

Who will watch the electeds?

Lucy with the football; indeed. Can’t think of a more fitting analogy of elected Republicans.

Is this a “paid_ puff piece for Heritage

Could be, but I didn’t see the disclaimer.

TLDR. He lost me with “populist political pornography”. He just can’t resist taking swipes at his lessers.

“There are a Trumpkins here” Terrible sentence that needs an edit, but hey, people type fast and what comes out comes out. He couldn’t refrain, and simply say Trump supporters? And yeah, always on his self-important high horse saying do as I say, not as I do.

Why must we be so serious all the time?

Lack of respect has nothing to do w/humor

‘Jes’ kidding’ ship has sailed. Your body of work illustrates your bias, and we don’t like the rhetorical putdowns.

Jonathan, like most of what you have been saying lately, that is an outright lie. You shouldn’t make such ridiculous claims that you have zero evidence to support.

It’s a fair, perhaps misleading, question. Did you receive any financial assistance for your junket or compensation/tuition/free gifts or premiums?

Trip entirely paid for by SBT and/or TBE?

Forgive our cynicism but we just went through an election cycle where shills and ‘media’ were bought and paid for.

Thank for this excellent, and inspiring, summary of the day’s events.