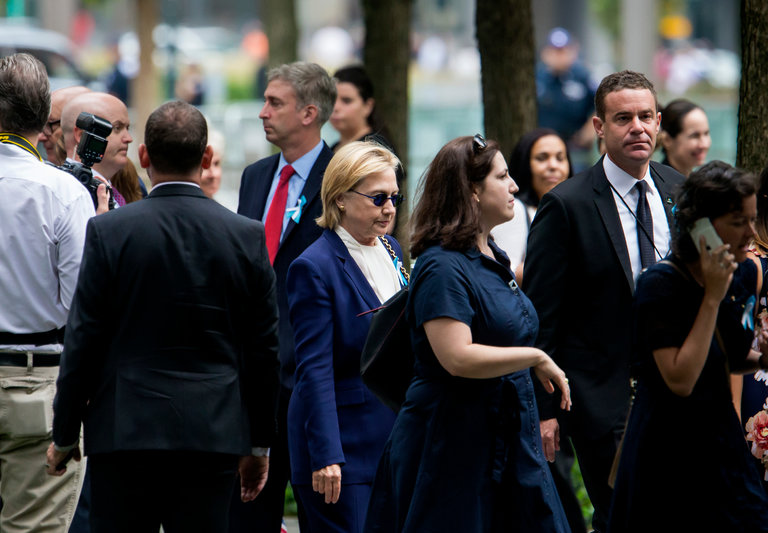 Hillary faints in New York–What is Wrong with Her? UPDATED–It’s Pneumonia

I have resisted writing about any of the rumors of Hillary’s ill health. Until now.

We’ve seen Hillary freeze in the face of protestors, appearing to have no idea how to cope with them until one of her handlers (Secret Service?  Personal physician?) tells her to keep talking.  Hillary’s had prolonged coughing fits while campaigning.  She’s also needed help to climb a few stairs.

Today in New York, while attending a 9/11 Memorial service, Hillary fainted and was escorted to a waiting van for the short trip to her daughter’s apartment in Manhattan. Her staff reported she was overheated despite it being only in the 70’s.  (Good thing she wasn’t at Liberty Farm yesterday where the temperatures were well into the 90’s!) Somewhere along the line Hillary lost a shoe so she is hobbling toward the Secret Service van when she appears to collapse again as she tries to enter the van.  See the story and videos here. For the next 90 minutes Hillary was out of communication and no press was allowed anywhere near her.  After that she emerged from her daughter’s apartment building, said she felt fine, and left to recover at her home in Chappaqua.

Now even the Washington Post is questioning Hillary’s health.  This from Chris Cillizza who has staunchly defended her and her health as recently as last week.  Today he said,

Whereas Clinton and her campaign could laugh off questions about her health before today, the “overheating” episode makes it almost impossible for them to do so. Not only has it come at a time when there was growing chatter — with very little evidence — that her health was a problem but it also happened at a 9/11 memorial event — an incredibly high-profile moment with lots and lots of cameras and reporters around.

But the issue is that Clinton kept reporters totally in the dark for 90 minutes after her abrupt departure from the 9/11 memorial service for a health-related matter. No reporter was allowed to follow her. (Clinton has resisted a protective pool for coverage because Donald Trump refuses to participate in one.) This is, yet again, the Clinton campaign asking everyone to just trust it. She got overheated! But she’s fine now!

Clinton may well be totally fine — and I certainly hope she is. But we are 58 days away from choosing the person who will lead the country for the next four years, and she is one of the two candidates with a real chance of winning. Taking the Clinton team’s word for it on her health — in light of the episode on Sunday morning — is no  longer enough. Reasonable people can — and will —  have real questions about her health.

I agree with Cizzilla.  Reasonable people are questioning Hillary’s health. We deserve answers.

UPDATE, as of 5:30 this evening Hillary’s campaign is reporting that she was diagnosed with pneumonia two days ago.  From the Washington Post:

“Secretary Clinton has been experiencing a cough related to allergies,” Dr. Lisa R. Bardack said in the statement. “On Friday, during follow up evaluation of her prolonged cough, she was diagnosed with pneumonia. She was put on antibiotics, and advised to rest and modify her schedule. While at this morning’s event, she became overheated and dehydrated. I have just examined her and she is now re-hydrated and recovering nicely.”

Pneumonia is debilitating and it’s not something she can recover from instantly.  She will need to take days, if not weeks, off from campaigning. Hillary is very ill.

UPDATE: Here’s video of Hillary attempting to get into the Secret Service van this morning. Judge for yourself.

Hillary faints in New York–What is Wrong with Her? UPDATED–It’s Pneumonia was last modified: September 11th, 2016 by Jeanine Martin

This dr. predicted pneumonia, suspecting Parkinsons and the cough/swallowing problem, over one week ago: https://www.youtube.com/watch?v=Zr1IDQ2V1eM

Mitt and Jeb be like ‘This is just so unfair, she’s not supposed to lose or die!”

[…] Hillary faints in New York–What is Wrong with Her? UPDATED–It's Pneumonia […]

I’ve had pneumonia, and it knocked me down for weeks! I’m surprised that she can speak at all. Any exertion can wear you out, and her health history indicates low resilience/unlikeliness of bouncing back anytime soon. Watch for reports from the Ministry of Truth soon, remarking on her good health. And accusing Trump surrogates of attacking her for being a woman…who coughs a lot.

Ditto. I had pneumonia a couple of winters back and I was knocked out for a month. The cough was awful and the fatigue was just as bad.

Me too, unfortunately I didn’t have such an uplifting staff and a Snap-On truck.

Hillary is being propped up by quick acting medications which are good in the short term but have long term repercussions. I wouldn’t be surprised to see her hospitalized but with the concierge medical staff around her such hospitalization can be hidden from the public. She was out of sight for nearly two weeks just a short while ago and here we go again. She needs to drop out and become a doting grandmother.

If she drops out, Republicans are in YUGE trouble. Hillary is the only candidate Trump has any hope of beating.

I don’t think that is necessarily the case. Many thought that Trump was a cooked goose a month ago and now he is leading in a number of national and state polls. Even the Republican Party National Committee is beginning to feel better about their Congressional and down ticket chances.

By the way, the Hillary ad trying to pillory Trump on national security and stability is gruesome for her. It is an attempt to recreate the Goldwater scare but instead points directly to her Benghazi failures. I have yet to see a Hillary ad that has any punch to it, primarily because they essentially carry the water for a very failed presidency in Obama.

Her “basket of deplorable” comment is horrific for her campaign. Lots of us want to get “deplorable me” t-shirts (Recent movie was “despicable me” which was a silly one for kids. They would love a “deplorable me” t.)
We need to have a contest for best t-shirt design with an option for a bumper sticker.

You hit it right. The ministry of (un)truth is telling us she is in great. Just a touch of pneumonia. Well, as a member of team deplorable who has had pneumonia, I know baloney and her team has gone well beyond baloney. Google searches now include Hillary death, disability, etc.

For purely speculative purposes, what would happen if Hillary had to drop out of the race before election day? The health issue will cost her votes. Many years ago in a NJ senate race, the Democrat candidate was involved in such a scandals affair that the Democrat party pulled him and substituted another. Campaign rules/laws were broken, but of course that doesn’t matter if it is a democrat. Assume that they decide to run the Vice President Candidate instead of Hillary. In desperation, they might also be tempted to blatantly violate any and all voting laws and rig every possible vote to win. This is life and death with them.

The DNC chooses a new candidate. Post on that scenario later tonight.

Not in appointing a new candidate, only in electing a President.

Right, which brings up the constitutional crisis that Team Jeh is preparing for.

NC is already voting — would Hill’s votes and Racer X be combined?

See how early voting is such a great idea?

And every time you say you don’t believe she can win, a supporter dies. So clap your hands and believe!!!

Once again, you are making me laugh out loud.

Might this be an excuse to keep Hillary off the campaign trail so that she doesn’t make any more deplorable comments?

You can’t discount anything when it comes to the POS Clintons.

There are 3 or 4 angles of her being loaded like a sack of potatoes, her Rasputin with the epi-pen opened the door — something metallic dropped, might have been the lynchpin.

Once again you make me laugh out loud.

I don’t believe any of it. This has been going on for months. The Clinton’s are nothing but professional liars. This is all just a cover story. This is much more serious than allergies and pneumonia.

And, that being said, I wish both Hillary and Bill good health.

I think your wish worked, I saw a video yesterday of her exiting the Chelseaspital on a lovely New York day feeling fine and then sharing Pneumonia with an adorable little girl.

Very likely that was the “famous” Teresa Barnwell hillary impersonator

Anybody see any pics/vids of Broomstick 3 arriving at the Chelsea Medical Center?

Another good question. Am guessing BS 3 went underground into a secured garage area. By the way, has anybody seen the attendant or the renters in apartment 5b who were on there way to London?

That’s right, using a palette jack and freight elevator is better than wheeling the dolly through the front door.

Lots of high rent apartments in NYC have underground or garage floor parking facilities that are managed 24 hours a day. In addition, the Secret Service advance team would sweep the path of anyone who might be perceived as a threat. Hillary could make it to Chelsea’s apartment almost without notice and without the press in tow.

The there is a great likelihood of an underlying condition. Since the medical treatment is being hidden while the diagnosis has been determined to be pneumonia, the question of types of medicines, side effects, and interactions is on the table.

Pneumonia is a killer of the elderly and recovery while under stress takes much longer than normal because the aging immune system and metabolism just sit what it once was. Hillary is clearly in trouble physically and there is more to come as the stress continues and will almost certainly increase as the election season winds down

It’s a killer of elderly who are already in a nursing home with other health issues. People in their 60’s cover from pneumonia rather easily.

That is why I believe there is an underlying condition that is not covered simply by the new brand of pneumonia shot. In addition, I don’t think a recovery period of a month or two is “rather easily”, and Hillary is under substantial physical, mental and emotional stress now that can extend that period. It appears that campaigning is beginning to break her down and that could easily have happened to anyone in their senior years.

Trump is really quite unique. He is an energizer bunny type of guy and his campaign schedule is amazing.

One final thought. We have had president’s die in office but, to my knowledge, we have never had a candidate die before the election or during the transition.

Another good reason why the Electoral College is a good thing

The founders were Americas best thinkers and they spent months trying to work through the pros and cons of the Constitution and national governance. It seems that every time we violate their ideas, civil rights not withstanding, we end up with a less stable and coherent government.

I got Vascular Dementia if we’re doing squares.

Another word is Alzheimers. Wow, a president with it who would have thought. Oh, wait a minute we had one and he was great. (Of course, it took a demented Democrat to cause the disease but he is now out walking the streets in my neck of the woods.)

I read that the Scooby van has a couple of Haitian orphans webbed up for just for these instances.