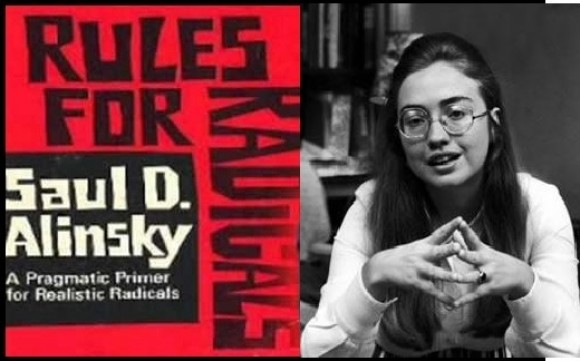 Hillary, Obama, and the Eight Levels of Societal Control to Establish a Socialist State

Saul AlinskyÂ is a famous socialist community organizer who Hillary Clinton focused on in her college thesis and with whom she frequently corresponded.Â Â President Obama is also a devoted follower.Â Alinsky authored the eight levels of government control necessary for a society to form a socialist state. Â Does anyone see any parallels between what he wrote and what the Democrats are striving for, and have largely accomplished today? [read_more]

How to create a social state by Saul Alinsky:

There are eight levels of control that must be obtained before you are able to create a social state.

The first is the most important.

1) Healthcare â€“ Control healthcare and you control the people.

2) Poverty â€“ Increase the Poverty level as high as possible, poor people are easier to control and will not fight back if you are providing everything for them to live.

3) Debt â€“ Increase the debt to an unsustainable level. That way you are able to increase taxes, and this will produce more poverty.

4) Gun Control â€“ Remove the ability to defend themselves from the Government. That way you are able to create a police state.

5) Welfare â€“ Take control of every aspect of their lives (Food, Housing, and Income)

8) Class Warfare â€“ Divide the people into the wealthy and the poor. This will cause more discontent and it will be easier to take (Tax) the wealthy with the support of the poor.

It would appear that the liberals have followed Alinsky’s teaching to the letter and are well on their way to creating the socialist society that he envisioned and they have worked so hard to establish. Â Hillary’s top choice for a Vice President is HUD Director Julian Castro whose mother was a consort of Saul Alinsky. Â Eight years of Hillary as President, with Castro as VP, should complete Alinsky’s vision of America, a society completely run by the government.

Hillary, Obama, and the Eight Levels of Societal Control to Establish a Socialist State was last modified: June 26th, 2015 by Jeanine Martin

Is this book out of print? Do just a few radicals possess it? Is it found at any local library?

Good article, Jeanine. Seems like plenty of GOP are going along with this stuff too, unfortunately..

Scary stuff to be sure, but better check that source.
http://www.snopes.com/politics/quotes/alinsky.asp

Snopes? But thanks anyway. Do you not see these things happening in our society today? Do they matter?

Of course, Jeannine. I care just as much as you do, and am doing what I can to combat the trend. However, I think that it is important to be precise in our attributions. If you have the specific quotation from Rules for Radicals, please advise.

The point Jerry is making is valid – nothing you attributed here to Saul Alinsky was actually written by him. The entire premise of this article is based on a lie.

You took an internet meme and tried to pass it off as political commentary.

Snopes is not an authority on anything realistic or pertinent. It is a couple in an apartment dreaming up their view of things and fooling sheeple into believing they are the authorities on about everything. Avoid these liberal loons or be willfully deceived.