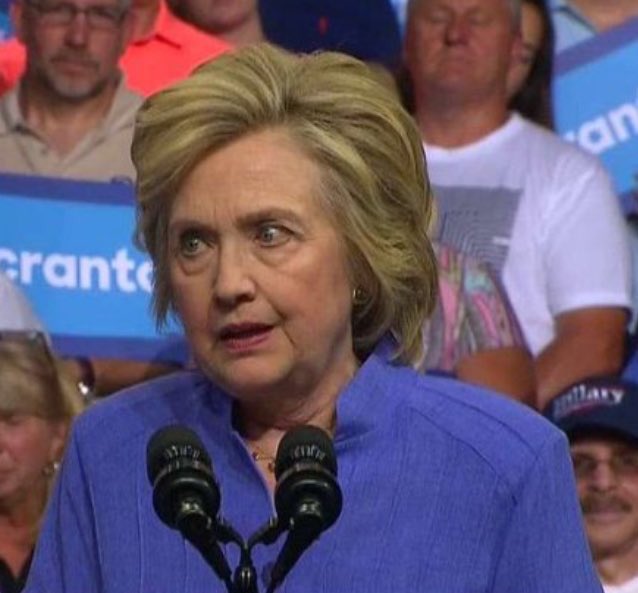 Hillary Taking off Weekends–How Sick is She?

In the last few weeks we have heard a great deal of speculation that Hillary Clinton is not healthy.  She has fallen a number of times in the last few years, one fall resulting in a serious brain concussion. Recently she needed help getting up a few stairs.

Now Hillary is shortening her schedule for appearances, taking off two or three days a week.  She certainly looks like she needs some time off, her appearance has changed in just a few weeks as the photo accompanying this article illustrates. 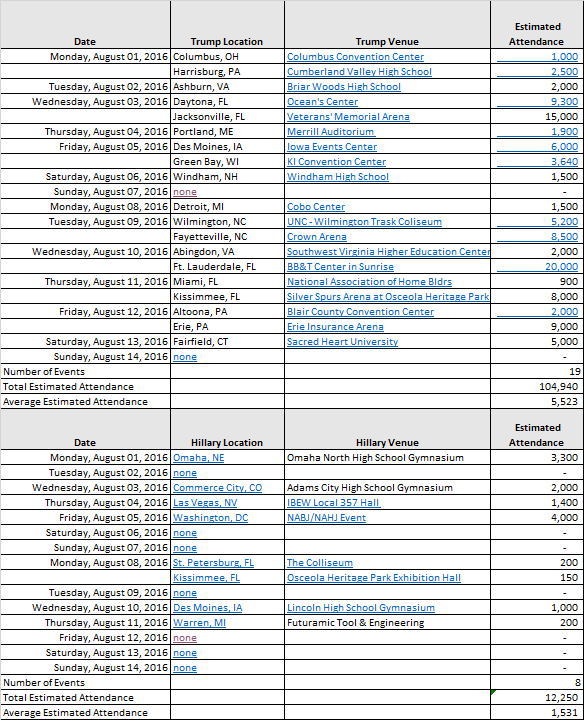 Hillary is barely working half time and her crowds are minimal.  Trump has had 19 events in August while Clinton has had only 8.  Trump’s crowds total 104,940, Hillary’s crowds are about tenth of that, 12,250. Why does Hillary have such low turnouts for her events?

Why isn’t Hillary campaigning full time?  Is she too ill to keep the rigorous schedule that Trump is keeping?  Hillary keeps demanding Trump’s tax returns, can we demand her medical records?  Don’t we deserve to know if Clinton is healthy enough to be President?  Of course we do.

Hillary Taking off Weekends–How Sick is She? was last modified: August 16th, 2016 by Jeanine Martin

[…] has been a great deal of speculation about Clinton’s health.  Hillary has one health problem that has been confirmed.  According to the Washington Examiner […]

There is an interesting artIcle in Readers Disgust about the long term problems associated with a concussion. If Hillary is suffering these effects, she is in real trouble physically and mentally.

Do you have a link you could share with us? Thanks.

Another nutty articel from the J-gal

From one of your sources: The problem, of course, is that none of the deeply concerned observers has actually examined Clinton, whose personal physician last year released a statement calling the former secretary of state in “excellent health and fit to serve as president of the United States.”

But that hasn’t stopped a somewhat stealth campaign to disqualify Clinton for the job by calling into question whether she can actually do the day-to-day job.
You are taking a rumor that is unsubstaneated and then reporting on others reporting of the same item – even when they are report that the rumor is nonsense
Nice try but stick with posting polls from months ago and claim Trump still has national support.

She might want to consider getting another personal physician, if that is what was said.

Remember some years back she did fall and have a concussion. I recently saw a video where she seemed to have some kind of seizure or head jerking. This isn’t just lack of energy.

2 concussions. you can go to drudge report.com she has fallen every year for several years, spent a yr. in the hospital, that we know of. What about the times that we don’t know of……you need to do your research so ou know what’s going on….

why should facts and reality come into this conversation – this one is simply pathetic – even you, J, can do better that publicize this nonsense

Problem is, SD? Your definition of nonsense is: Any criticism of Hillary Clinton. 0r, telling the truth about any Clinton.

Which government tit are sucking a check out of?

except that this is not the truth about Clinton – it is the same people repeating the same rumor they made up originally and claiming that it must be true simply because they are talking about it themselves – bring the facts and I will back off
BTW – I am not a fan of Hillary and would vote for anyone else, but trump

What record can Hillary run on? Not Bill, Hillary?

here is the nonsense I worry about

My biggest grip with Trump is the stupid stuff he repeats (and believes).
I would not want him representing me to the world. All else can be taken care of with congress and the courts.

And I ask again, what record does Hillary have to run on?

Law school, years of public service, senator, state department. She knows how the govt works, how laws are made, how foreign govt s work, etc.

Then get on her train. Come out the closet.

I saw that too but I wasn’t sure if she was doing on purpose because she said how strong her coffee was. I thought she might be just fooling around.

Normally, I would pay much attention to this. However, Alex Jones has reported on the Hillary Health issue, and also Lou Dobbs. You can find video of this on YouTube, along with a slew of video where Hillary is seen to be looking very bizarre in her behavior. There is also Hillary’s known history for taking time out for health reasons.

And so, with the above, the shortened campaign schedule seem to be a pretty leading indicator. Because nobody in a presidential campaign takes time out until after the votes are counted.

You should pay attention as it is being squashed by the media so we have to go elsewhere to find the truth!!!!!

Oop! Forgot to put ‘not’ in the first sentence … now corrected.

You are right, of course. The media is squashing … and without the alternative media, none of this would be coming out. And we’ll see where this all goes.

Lots of Alternative news = Alex Jones, Josh Bernstein Show, Liberty Guard, WND, ROGER STONE’s Stonezone, but he’s not too much on news unless he’s interviewed by Alex Jones, Tim Brown – truth writer from South Carolina, Drudge, and you can sign up for Truth newsletters that go out daily usually. I have put one out for 19 years now. THE FREEDOM REPORT.
Some of the above listed programs also have newsletters. There are others too I just can’t think of them right now.
But we have more choice in the Alternative programming then all of TV has that are all owned by just 6 people ! Yup ! ALL media is all owned by the same 6 people !
But in the Alternative media each is privately owned.

By the way, do what so many of us have now done for the last few years – get rid of the TV ! There is nothing on it anymore worth letting all the tons of commercials, subliminal messages and DC controlled propaganda shows into your home and mind.

With Felony convictions, two sentences in stir, foot amputations and one lung removed, the now penniless, obese, diabetic, brain clotted, cirrhotic and hairy Screech navigates her rusty wreck of a wheelchair between weeks old reeking rancid bags of garbage in a New York City alley, using a stick to poke among wormy trash and to knock on alley doors for her sustenance: cheap wine and dog food.

> Why does Hillary have such low turnouts for her events?

ok since we have to explain…..people just adore the corruption she represents.

We hang out in political circles and no what is going on. The average American either does not or doesn’t care. OTOH, why would the doesn’t care group bother to go to rallies?

She isn’t well. Pretty amazing that she is even allowed to run for a variety of reasons.

Allowed? Whose going to stop her?

Yep, she OWNS the democrat establishment.

She can do whatever she wants.

nobody bec. the dem party is in on “it”.

One needs to be in excellent health to be president. I would urge Clinton to get out of the race. Let Kaine take the reins.

Only fair to let Pence take over the top of the Republican ticket.

oh please, he is an insider that’s why he likes paul rino……DT had to take him on to get the establishment to go along.

We don’t want that, Kaine would have much more appeal.

do you know who he is connected to? M. Bro.