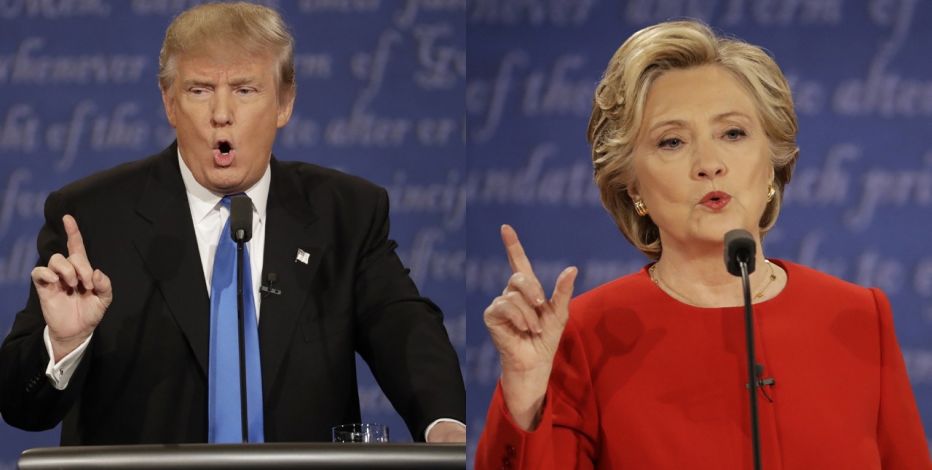 Hillary was Better Prepared than Trump, but Few Minds Were Changed

Trump’s big mistake last night was not having prepared more for the debate. Â He thought he could wing it, be himself, and the outcome would be the same as in the primary debates, he would triumph. Â Didn’t happen. Â So many missed opportunities!

Despite the fact that most focus groups, like Frank Luntz’s focus group, felt Hillary won the debate, few minds were changed. Â The University of Mary Washington held a town hall meeting:

Online polls after the debate are useless. Â CNN showed Hillary winning, Fox and Drudge had Trump winning. Â Larry Sabato of the UVA Center for Politics makes this point:

It is dangerous to offer confident predictions of how the public will react to a debate immediately after it is concluded. The instant polls you may see (or may have already seen) after the debate declaring one of the candidates the winner may or may not be meaningful, and in order to fully assess the impact weâ€™re probably going have to wait until the end of the week, when new national and state polls will assess how the two candidatesâ€™ performances changed the race. Itâ€™s no fun to urge patience â€” but we think thatâ€™s better than making sweeping pronouncements in the aftermath of a widely-watched national event that voters may interpret quite differently than experts may expect.

The pundit consensus seems to be that Hillary Clinton â€œwon,â€ but we all know how many times Donald Trump has been counted out, only for him to endure. We also know that Clinton and Trump are talking to two very different countries, and political analysts and reporters are generally in the country Clinton, not Trump, inhabits. However, Trump faces many questions about his qualifications for the job and his temperament, and we donâ€™t believe he did much to provide satisfactory answers to those concerns. Perhaps enough voters want change so much that they are willing to overlook their reservations.

“The optics of him butting in and audibly moaning can’t be good for him, and I don’t think the split screen helped him…his facial expressions weren’t helpful,”

“My overall sense is that she ‘won’ the debate, but I don’t think that means that she will have won over any Trump supporters,”

“If you were a Trump supporter before the debate, you are likely still one now. But, she may have pulled over some wavering undecideds to her side, and she likely solidified some of her soft support. I’d expect her to rise a point or two in the polls, if that, but not much more.

Â  “I don’t think the general dynamics of the race have been changed.”

We all remember the first debate of 2012 when Romney dominated. Obama wasn’t prepared, he thought he could show up as his haute, intellectual self, and dominate the debate. It didn’t work. He needed to be better prepared and he knew it. Â In the next two debates he was obviously much better prepared. Â The same thing will happen with Trump. He now knows that he must be better prepared. Â He’s a smart man, he won’t make the same mistakes again.

In the end the question facing voters will be, are you happy with what the Clintons and the Obamas have done over the last 30 years, or are you ready to try something else? Â Hillary has had 30 years to change things and she has done nothing but change things for the worst. Â Will Americans vote for more of the same? Â Or will they take a risk with Trump because Clinton has changed nothing in 30 years, no matter how much she ‘cares’. Â Caring with no action and no results is useless.

Hillary was Better Prepared than Trump, but Few Minds Were Changed was last modified: September 27th, 2016 by Jeanine Martin

Ben Shapiro has an interesting article on the six insane things that Hillary said:

Thank you! Great article. I have made it a microblog post.

Perhaps Trump is guilty of making the same mistake our military is so often accused of making – preparing to fight the last war. The last war for Trump consisted of a number of emotionally charged confrontations, not debates, with multiple participants.

Or, perhaps this was carefully calculated to more or less put to rest the one concern the media and the electorate have harped upon. Can Trump be presidential, with “presidential” meaning, not being a big, mean, bully. Let’s not forget that the vast majority of voters have no knowledge, understanding, nor appreciation for the issues under discussion. They are simply reacting to perceptions of personality, not policy prescriptions.

Was this rope a dope, getting ready for round 2? I doubt it, but, it’s possible. Even if it wasn’t, if I were giving Trump advice, that is how I would use the outcome of the debate moving forward.

I have to question that she was better prepared. Trump had to handle both Hillary and Holt – and the best idea was to be flexible. She obviously had a bunch of platitudes to spew out but had she actually been hit it is doubtful that she could have been spontaneous. His comment about American’s living in Hell in the Inner Cities contrasts nicely with her Trumpian sound bite for the MSM.