According to the latest NBC/WSJ/Marist poll Clinton is ahead in 4 key swing states, Florida, Virginia, North Carolina and Colorado.  Her biggest lead is in Virginia where Trump trails by 9.  (Sounds like Hillary won’t need Kaine on the ticket to carry Virginia.) 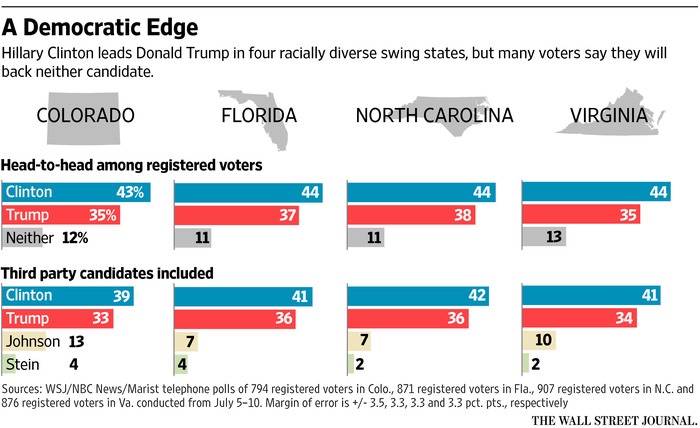 Neither candidate is popular with the electorate:

Other polls show the race much closer in Florida and North Carolina.

Should Trump lose all four of these swing states he would need to win Pennsylvania, Ohio, Michigan, Wisconsin, Iowa, New Hampshire, and Nevada to pull out a win.

I cannot find a link to the tables on the Marist polls. Until we know the breakdown of the voter demographics, this is useless. North Carolina, Florida, and Colorado register by party affiliation. There is no information backing up the breakdown on any of the states.

What was the survey distribution on party identification? What were the demographics of those surveyed?

Agreed. Hampton University came out with a poll today with Trump and Clinton tied in Virginia. I don’t see Clinton up by 9 in Virginia, especially if 60 percent of Americans thought she should indicted.

Sorry, #NeverTrump’ers/pathetic & FUTILE unbind-the-delegate-rs sore-losers a.k.a #VoteForHillary’ers: you can’t STEAL the nomination from him, & Trump is going to win the general election in a LANDSLIDE!

Wow! Breaking news – this just in! Worthy of a post on TBE and a headline! There is a traffic jam on I-95 south! Cars are backed up over a mile!!
These anti Trump posts have morphed into silly hysteria. John

It’s Saturday. You’ll have to cope. 🙂