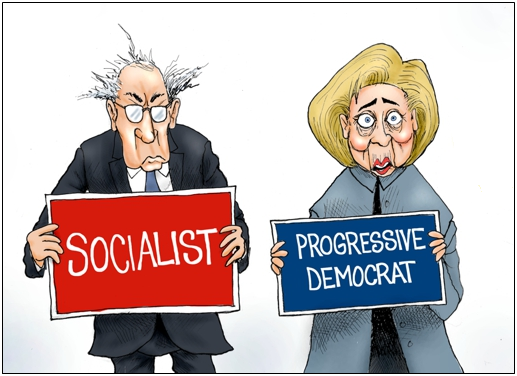 Hillaryâ€™s $1.1 trillion tuition plan to be more Bernie than Bernie

Clinton has agreed to meet Sanders halfway on education policy in an attempt to convince Americaâ€™s college age youth that she is their advocate.

The only problem is that her plan turns out to be just another ineffective and costly political tool â€” by promising to pay for almost everybodyâ€™s college tuition. A plan that could cost more than $1 trillion every decade once fully implemented.

Clintonâ€™s newly unveiled plan states that â€œby 2021, families with income up to $125,000 will pay no tuition at in-state four-year public colleges and universities â€” covering more than 80 percent of all families. And from the start of the plan, every student from a family making $85,000 a year or less will be able to go to an in-state four-year public college or university without paying tuition. Students at community college will also pay no tuition.â€

The plan also includes restoring year-round Pell Grant funding and promises and immediate executive action to offer a three-month moratorium on studentâ€™s loan payments to give students an opportunity to receive additional options.

With no specifics Clinton writes that this will be â€œfully paid for by limiting certain tax expenditures for high-income taxpayers.â€

In 2015, the average yearly tuition price was $6,371 and the yearâ€™s public university enrollment was reported as 13,353,000 students, according to data compiled by the National Center for Education Statistics. This data provides a clear picture of tuition and enrollment trends, and allows us to determine how much Clintonâ€™s plan will cost today and in the future.

Clintonâ€™s plan aims to include 80 percent of all public university students, meaning that in 2015 for the 10,682,400 students affected the plan would cost $68 billion at present costs if implemented fully right away. And thatâ€™s just for starters.

By 2025 Clintons plan will be fully implemented, if tuition continues growing like clockwork at 6.61 percent a year it will have reached an annual average of $12,304 and enrollment is projected by the Department of Education to be about 15,255,000 students. In order to pay for the education of this class it will costs over $150 billion that year alone.

If the plan went into effect today rather than her 2021 rollout date, given these assumptions, Clintonâ€™s plan will easily add up to $1.1 trillion over 10 years. 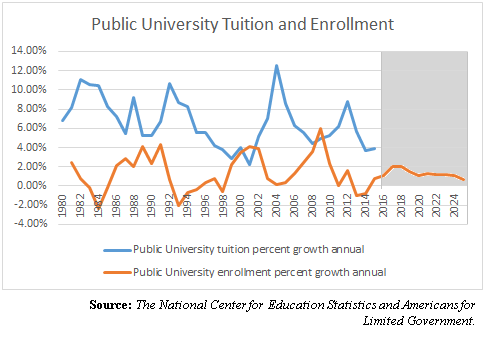 No wonder Clinton has neglected to discuss the cost. It would show how her plan to win over the Bernie-loving millennials is nothing but outrageously expensive and inefficient.

Sanders plan was projected to cost $70 billion a year with a third of the costs being burdened to states to pay, Clinton instead chose to place nearly the same costs on the high income tax payers who are also paying for their childrenâ€™s education.

However, the cost of Clintonâ€™s plan may not stop there.

In order to find the full cost for the Clinton plan, we must acknowledge two key limitations.

But even assuming public university tuition cost and enrollment follow their average growth trends over the next 10 years, the plan will still cost more than trillion dollars its first ten years.

This is not a plan to improve higher education and it does not aim to mitigate costs into the future. It is a blanket promise that Clinton is attempting in a desperate bid to gain the trust of millennials and appeal to the Sanders fans who have vowed to never vote for her. Clintonâ€™s college plan is not an altruistic attempt to provide higher education, but a $1.1 trillion cynical, political ploy.

Limbaugh is on a Trump roll today! Talking about the polls that show Trump improving in the battle ground state polls.

Polls, polls, polls. Limbaugh sounds just like he did in 12′, just before Romney went down in the flames of defeat to Obama.

As I have said for months, the establishment owned media will make this a neck to neck horse race until November. It’s all about ratings and profit. There is no money in a blowout.

And then, they will throw Trump to the wolves.

Quinnipiac is a good poll and not owned by anyone.

How do you explain the answers in that poll to questions 19, 20, 21, and then the results for Trump?

Doesn’t the poll conflict with itself? What kind of people were polled?

It isn’t logical. It just proves how screwed up our education system is.

It is logical enough. Questions 13, 15, 17, and 18 are much more important to voters, and Trump is killing it on those questions.

That, in my opinion is totally illogical, and brings into question the quality of those polled.

Polls are virtually worthless, with the exception of the candidates own polls. Those polls are generally very accurate. Why is that?

Quinnipiac is a decent poll, but polls are not gospel anyway. The media, and Obama (though I repeat myself) are telling the electorate everyday that Hillary is extraordinarily smart and well prepared. The poll respondents are not going to argue about that, because it doesn’t matter to them. They don’t like her and they don’t think she should be President, regardless of her ‘preparation’.

In my opinion, neither Trump nor Billary are qualified for anything but jail or retirement.

However, we got a real problem when people do not vote for the candidate who is best prepared for the office they are seeking.

I would much rather have a doctor operating on me who I didn’t like, but was the best prepared doctor, rather than one I did like, who wasn’t prepared.

And another thing, I don’t care what either says about the other. It’s all lies. Why would anybody believe anything that comes out of either of their mouths? You must enjoy being lied to?

You sound pretty bitter about these polls…. do you really think people don’t know who Donald Trump is? Or Hillary Clinton? They know them both well enough, and they certainly know which they trust and which they like. If I were a Democrat I’d be very worried about the poll trends of the last month. This particular poll looks devastating for Hillary. We will see.

Pre-convention polls are trash. Don’t think Bill is not holding back the good stuff on Trump until the end.

Go find the new NBC poll and just look at the difference between it and Quinnipiac for PA. The polls had Sanders within two of Billary in CA, he ends up losing by almost 13.
Hell, some polls had Obama losing to Romney a week before the election.

Bitter? I know better than to swallow the establishment owned media lies.

Both Rasmussen and Gallup had Romney ahead of Obama in their final polls in 2012.

I don’t take either seriously to say the least.

On that I will agree. I don’t take any poll too seriously. My point has always been that those who say Donald Trump can’t win based on early polling, are incorrect. He certainly can win.

1. First, because he is running as a Republican.

Second, the Republicans cannot carry the demographics they need to win for state wide or national elections.

Third, in addition to the demographics that the Republicans have alienated, Trump has alienated even more.

Find if you disagree. But, prove it by pointing out the demographics that Trump will carry that Romney didn’t.

Yes he can win. Your assumptions are flawed. For example, Romney’s results are not the baseline for Trump. Trump is already bringing new people that Romney didn’t get. Just because Trump is running as a Republican doesn’t mean he is stuck with a traditional Republican base. Trump is going to get some disaffected Democrats. I could go on, but it’s pointless. Let’s just agree to disagree on this one. See me in late September and we can talk more seriously about polls.

You could just tell me the demographics Trump will win with.

The Republicans who vowed not to vote for Trump. They will more than offset any crossover from Billary. Then there is the cash shortage.

This is about payback for the Republicans who stay at home in 12′ and failed to support Romney.

What goes around comes around.

Actually, this election season is unlike ’12 in some very important ways. In 2012, Romney actually had a small lead over Obama in May, but he got absolutely clobbered by Obama in June. Obama hit Romney relentlessly and solidified a perception that Romney is all Wall Street, heartless in every way, laying off people, and miles apart from the average guy on the street. Romney was down 8 points or so by the end of June and he never recovered much from that position for the rest of the race.

This year it is Trump who has spent the month of June defining Hillary as corrupt to the core. And he hits her relentlessly on that theme. The polls are swinging now as that perception sinks in with most of the electorate, even though Democrats don’t give a whit about corruption. Hillary will be on defense for the rest of this election season and it’s hard to see how Hillary can turn the tables now. Trump can win this race.

We just need to see House of Cards Season 5 to see how this election turns out.

Progressives are socialists. Progressives just use propaganda and indoctrination rather than violence. The end is the same – tyranny.

Well said Natalia. This is just one more “socialists-progressive ‘pie in the sky'” attempt to pander to one part of the electorate while once again expecting to stick it to not only the rich who have their own children to educate but also to give a back hand to every other blue collar working man and woman at the same time. So how can we reduce the costs of a college education without adding to our constantly increasing but “immoral” (T.Jefferson) national debt at the same time?