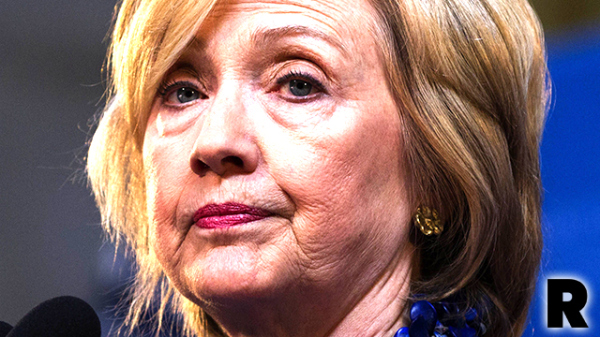 There has been a great deal of speculation about Clinton’s health.Â Â Hillary has one health problem that has been confirmed. Â According to the Washington Examiner Clinton suffers from hypothyroidism, as do 10 million Americans.

Hypothyroidism means the thyroid is under active causing fatigue, lethargy, weakness, and weight gain. Â It is treated with a hormone medication that reduces or eliminates the symptoms of the disease. According to Clinton’s doctor she is being treated with Armour Thyroid and she is in excellent health. Â From the Examiner,

Yet Armour Thyroid is a less common medication used in patients with hypothyroidism, possibly indicating Clinton wasn’t responding well to the conventional treatment.

When patients are diagnosed, they typically are given a single hormone replacement called levothyroxine. It is effective with about 90 percent of patients, according to Hossein Gharib, a doctor at the Mayo Clinic and former president of the American Association of Clinical Endocrinologists.

But for the 10 percent of patients who don’t find relief from their symptoms, doctors often prescribe a combination hormone therapy such as Armour Thyroid, which uses the T3 and T4 hormones for a more effective medication.

“Armour Thyroid â€¦ is a good preparation, but we don’t use it that much because most patients are happy with levothyroxine,” Gharib said. “The theory is that one hormone may not be enough; two is better.”

According to celebrity doctor Drew Pinsky, it’s ‘weird’ that Clinton is being treated with such an ‘outdated’ and ‘unconventional’ medication. Shortly after Dr. Pinsky expressed concerns about Hillary’s health and health care, his show on CNN was cancelled. Â Story here.

Oh just stop it, JM. Your suggestions that Hillary is not fit as evidence by these made up smear campaigns is simply sad.

Trump is using made up medical opinions about himself all his minions like you make up stuff about Clinton
http://www.nbcnews.com/news/us-news/trump-doctor-wrote-health-letter-just-5-minutes-limo-waited-n638526

and remember, Trump has yet to deny that he paid no federal income tax for the last 5 years all while funneling millions to Russian shell companies and skimming from his bankruptcies

What has that got to do w/thyroid disease?

Nothing, absolutely nothing. Democrats just like to change the subject.

JM is trying to persuade people to think Clinton is unfit to be president despite having absolutely no actual facts. This posting follows one from a few days ago where JM links to made up stories about clintons health. So, there is no story here beside JM and TBE pushing non-facts. My silly posts have as much credibility.

And I am very much an independent. This is why I challenge unsubstantiated rumors and radical viewpoints. Give me any other choice than Clinton.

Lmao, bc Democrats have the market cornered. *insert sarcasm smiley*

If anything has become clear in this election cycle, it’s that they’re all full of “it” and only hear what they want when it suits a predetermined agenda. Everybody or all y’all, whichever your preference.

/Just a poster child for good health and fitness.

I never said any of that. You democrats really need to get a grip. The woman is being treated for a rather common medical problem. That’s all I said.

then why post like this. You are lying to yourself if you think that you are simply a news conduit. You are absolute trying to shill for Trump.

One doesn’t have to be a doctor to observe she isn’t healthy, plenty of signs and symptoms are obvious especially if you have spent any amount of time around the elderly. She gets elected in poor health, she will go in recluse behind closed doors and Chelsea will be running the country. Goody for us///

,Everyone would need help getting into a car that high off the ground..