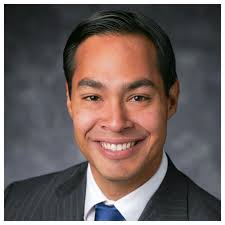 “What I am hearing in Washington, including from people in Hillary Clinton’s campaign, is that the first person on their lists is Julián Castro, the … Secretary of Housing and Urban Development, who use[d] to be the Mayor of San Antonio,” he said in an interview with Univision’s “Al Punto.”
“They don’t have a second option, because he is the superior candidate considering his record, personality, demeanor and Latin heritage.”
“I think there is a very high possibility that Hillary Clinton may choose Julián Castro,” he said.”

As Mayor of San Antonio Castro was the youngest Mayor among the top 50 US cities. He is a graduate of Stanford University and Harvard Law school.  Like Obama who was the first Black to give the keynote address at the Democratic National Convention in 2004,  Julian Castro was the first Latino to address the Democratic convention in 2012.
Not everyone thinks Julian Castro is the new greatest candidate for Veep.  Read what thedailybeast.com has to say about this unqualified candidate.
Sounds like Castro is the one for Hillary.  O’Malley, Webb, and McAuliffe can stop competing for the job. White men need not apply.
More here.
Hillary’s Vice Presidential Choice was last modified: May 19th, 2015 by Jeanine Martin
Henry CisnerosHillary's Vice PresidentJulián Castro
7 comments