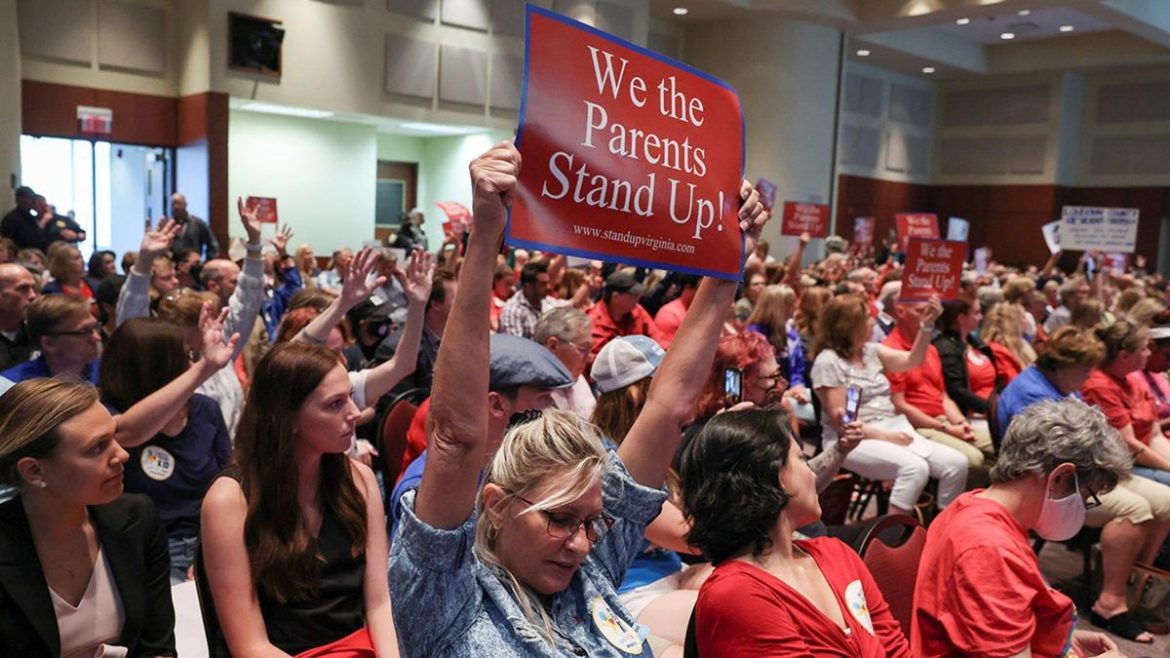 Independence Day should be the most celebrated day in the nation. But with the announcement that the National Education Association, the nation’s largest teacher’s union, plans to promote critical race theory and rewrite American history in schools across the nation, it may never be again.

As voters are becoming more engaged, such concerns are being discussed throughout the commonwealth, including with Virginia’s Republican gubernatorial candidate, Glenn Youngkin, for whom CRT, law enforcement, and job creation remain key election issues for November.

I’m one of the volunteer co-chairmen of the Latinos for Youngkin Coalition, which was recently launched in Northern Virginia. Youngkin has gone on record to Hispanic leaders stating that when he’s elected governor, “CRT would have no place in Virginia.”

In contrast, Youngkin’s Democratic opponent, former Governor and Clinton crony Terry McAuliffe, has minimized the impact of CRT. “The Macker” is keeping to the Democratic playbook, calling CRT another “right-wing conspiracy.”

But the CRT Marxist oppressor/oppressed racial mindset advanced by Democrats nationwide has outraged proud Virginians of Hispanic descent who respect assimilation with diversity.

In Loudoun County, Virginians remain outraged over news that taxpayers there were billed $34,000 for 55 hours of CRT coaching on “White Individualism” and “Color Group Collectivism.”

So it was refreshing to hear Youngkin, the retired co-CEO of the Carlyle Group—who with wife Suzanne founded the non-profit Virginia Ready Initiative that focuses on helping the unemployed with job training— responding to this latest form of educational outreach.

For decades, such attempts to engage that were made to Republican Party of Virginia officials fell on deaf ears. That’s why conservatives lost the governor’s mansion to Democrats year after year, and deservedly so.

Comfortable in cowboy boots and casual attire, Youngkin spoke to concerns from Hispanic independents, conservatives and even Democrats who gathered to meet a candidate who shared their values. He reiterated his support for protecting law enforcement personnel over concerns about qualified immunity affecting retention.

Virginia’s State Police Superintendent Gary Settle says that 330 trooper vacancy positions in 2021 are clearly affecting public safety, at a cost of $68.7 million lost in attrition over the last five years.

Most Virginia Latinos agree that teaching our children and grandchildren that people should not to be ostracized for the level of melanin in their skin is responsible parenting, not a racial conspiracy.

But CRT and the attempt to force feed our school children ideology over the historical understanding promoted in other controversial programs such as the 1619 Project has Hispanic leaders like Stafford’s Katherine Barrera, the parent of seven children, greatly concerned.

“We want our children cognizant of history, warts and all, but not seeing history rewritten for personal political gain,” Barrera stated.

Credit Hartwood Supervisor Gary Snellings for planning to place the contentious issue of CRT on the Stafford Board of Supervisors’ next meeting docket for discussion. Snelling states that he’s had enough and demands answers on CRT from the school administration.

Community leaders are also taking issue with those attempting to misrepresent Hispanic identification by renaming our community with the political neologism Latinx, rather than the existing terms of Latino, Latina or Hispanic, which remains inclusive of all sexes and ideological mindsets.

Then there’s patriotism under assault again by the disgusting action of athletes protesting the national anthem during the Olympic trials, fueling the racial divide in Virginia’s gubernatorial race.

Youngkin has stated that his campaign goals are to promote the American Dream for every Virginian by creating good-paying jobs and more opportunities for students to receive a quality education, and expanding access to affordable health care and veteran’s care.

Emphasis on the words “every Virginian” by Youngkin contrasts with McAuliffe, who goes on record campaigning by identifying voters by sexuality, race, gender or economic status.

Personally, I find it insulting how dismissive Democrats like McAuliffe remain over the troubling conduct from violent factions of Black Lives Matter in Virginia and around the nation, while encouraging public officials to defund law enforcement.

And are we refusing to acknowledge racial shaming by teaching CRT in our schools, but advancing it through “social equity” programs? Virginians need to know.

As the troubling CRT issue is hitting home for more Hispanics, they—like all voters in Virginia—must decide who best can stop the ongoing attempts to cause racial division.

It appears that Youngkin, a new political face who is promoting genuine outreach with unity, not forced CRT in our schools, has growing momentum within the Hispanic community.

Daniel P. Cortez is a Stafford resident, presidential appointee, political writer and broadcaster who serves as the volunteer co-chairman of the Latinos for Youngkin Coalition.

All of your comments are whistling past the grave yards. I support Glenn. I am, however, a realist. There are more total democrat voters from NORVA/DC area, down the eastern shore through Tidewater, than there are Republican voters in the entire state, combined. McAwful WILL be re-elected as will all the rest of that traitor’s candidates. It’s a given. Unless there is a miracle in November, we will never have another Republican Governor, Lt Gov, AG or US Senator ever again. Will I campaign for him? Of course. Will I vote for the Republicans? Of course. Bit I will not be surprised when we lose.

Was just looking at the video of looting in South Africa. BLM is well organized there and they are looting, burning and killing to the point that major elements of society are virtually extinct. Try living with no food or water, Those electronics won’t do you much good.

And, interestingly, black Africans are attacking brown Indians and Asians as well as whites.

Great job, Dan cortez! I do hope Latino families with kids in public schools become engaged to speak out against CRT. I don’t see many of them at thesehearings and rallies. And, this Sounds like a great coalition of Latino Republicans who can help woo Latino voters to the Youngkin ticket, and vote for GOP House candidates. If we can equal what trump got in the Latino vote in 2020 — 32 percent according to some polls –we can win this election. Fantastico!

Put the glass dick down WTF!

What is a “distinguished Vietnam veteran”?

I’m a veteran of two tours in the bush in Vietnam as an infantryman. I have a truckload of medals. Does that make me “distinguished?”

I always consider the “distinguished” Vietnam vets as the ones who came home in caskets or with arms and legs missing. The rest of us did our jobs and were happy to come home in one piece or with only a couple of bullet holes.

“Does that make me “distinguished?” If you are a veteran and a Democrat, that makes you a traitor.

Always knew that Conservatives did not really have any respect for veterans. This just puts it out there for everyone to see. I’m sure THIS post will not be censored by the owner.

The two worst kinds of scum of the universe are 2) veteran Democrats and 1) pro-abortion pediatricians.

Again you broadcast your disdain for veterans. Typical Conservative…

Good letter. I would have less problems with the proponents of CRT if they were to (a) mention the fact that slavery was universal and therefore white Americans were not uniquely evil in tolerating it, (b) mention that white Europeans were UNIQUELY good in that they went around the world stamping out slavery, and (c) name specific instances of systemic racism.

Aside from the fact that this article is nonsense that does nothing but repeat lies from Fox, let’s address one of your comments.

You want an example of systemic racism. Okay, here’s one.

In the Louisiana parishes between Baton Rouge and New Orleans are six Black communities that have been and continue to be denied FEMA aid to rebuild after hurricanes. The people in these communities lie on land inherited from their parents who inherited from their parents . . . . all the way back to enslaved ancestors. The communities are on what was once the “slave quarters” of sugar plantations. Because of Jim Crow laws enacted after the end of Reconstruction, most of these people have no deeds to the property — because Blacks were not allowed to file for deeds. FEMA requires proof that you own the property before they will provide aid. Most of the people in these communities have no such proof — they are living where their enslaved ancestors live. The SYSTEM has prevented them from gaining legal title to the land, preferring instead to ignore them.

Your other two comments are equally ignorant.

Not quite. “Indeed, FEMA’s own analyses show that low-income homeowners receive less repair assistance. But FEMA has never systematically tracked the race of aid applicants, which means the agency has never had concrete demographic data about who is receiving help. That will change “in the near future,” says Turi, the assistant administrator for recovery, although he did not specify when.”

Take a look at Donnie Speight in the photo in the article. Does she look Black to you?

Meanwhile. FEMA started taking sworn letters of ownership in lieu of deeds for repairs caused by Hurricane Maria in Puerto Rico. That was back when Trump was president. But that rule doesn’t apply within the continental United States. Help me recall – who is president now?

Strangely, the advocates of Marxist CRT never mention indentured slaves. Could it be because they were white?