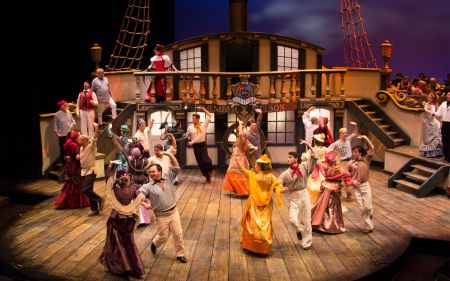 Gilbert and Sullivan’s famous opera, HMS Pinafore, has been a favorite of English and American audiences since 1878. In addition to its wonderful music, Pinafore offers a wickedly mischievous libretto in which comic genius W. S. Gilbert pokes fun at various foibles of 19th-century British society. One of these was the tendency of rich old men to marry women young enough to be their granddaughters. (Sound familiar?) Another was politicians commanding the navy, when a partnership was “the only ship [they] ever had seen.” But the core plot of Pinafore is the First Lord of the Admiralty’s quixotic campaign to rid the navy of bad language and bad manners.

“Bad language and abuse I never, never use, whatever the emergency.

“Though ‘bother it’ I may occasionally say, I never use the big, big D.”

Sullivan’s tuneful score and Gilbert’s witty script make for great fun, but I mention the opera for the verisimilitude of its plot to the present day. A similar campaign against “crude language” has now been going on in the US Navy for more than a decade. At the campaign’s outset in 2005, the US Naval Academy’s Superintendent, Vice Admiral Rodney P. Rempt, brought a court martial against a faculty member, Lt. Bryan D. Black, for making a “crude remark” in front of female midshipmen. Lt. Black’s prosecution established a model for the admiral’s “zero tolerance” campaign against sexual harassment proceeding from inappropriate language.

Some of my readers will probably think this prosecution of the (presumably) foul-mouthed Lt. Black is a positive development in a society that seems to be growing cruder by the day. After all, what’s wrong with pushing back a little against bad language in one of our key institutions?

To show that there is more here than meets the eye (or ear), however, I present an imagined “interview” with a spokesman for the Navy on the topic of offensive language.

The Bull Elephant: Presumably, the court martial of Lt. Black represented a general offensive against bad language at the Academy, and perhaps the entire Navy. Are we correct in assuming that?

US Navy: Well, yes and no. It’s all a matter of who hears what. If a woman hears a man say something “crude,” he could be in serious trouble – just like Lt. Black.

TBE: But if no woman is present, a sailor can still… well, curse like a sailor?

USN: Possibly so, although we should not put it so, ah, crudely. The concern here is the potential for sexual harassment. The assumption is that women would be offended by Anglo-Saxon vulgarisms, but men wouldn’t. That is the Navy’s official position. (“What never?”)

TBE: And a female sailor could use crude language in front of men without sanction?

USN: Probably so. The sexual harassment regulations point in only one direction.

TBE: What if a sailor uses profanity – cursing the name of God, etc. – in front of a woman? Would that be prosecutable?

USN: Probably not – at least, not under the sexual harassment regulations.

TBE: Then using the Lord’s name is perfectly OK by all navy personnel?

USN: No, I didn’t say that. Actually, Navy policy requires chaplains not to use the name of Jesus in public prayers.

TBE: In other words, it’s OK to curse in the name of Jesus, but not to pray in his name?

USN: Well, ah, technically yes. Again, it’s a matter of who is offended. The thinking is that praying in the name of Jesus could be offensive to adherents of non-Christian faiths or to atheists.

TBE: But doesn’t profaning the name of Jesus or God offend Christians?

USN: Possibly so, but Christians are not a “protected class” under Navy policy. Whether they are offended is of no more concern to the Navy than if canasta-players or bocce-bowlers are offended by some belittling comment.

TBE: What about profaning the name of Allah in the presence of sailors who are Muslims? Would that violate Navy policy?

USN: As I understand it, yes. The Navy is committed to diversity. Sensitivity to various elements of its diverse mix, such as people of the Muslim faith, would be one of the Navy’s concerns.

TBE: So the Navy’s position is that Christianity is no more important than bocce-ball, while Islam is a serious faith that must be treated with respect and deference?

TBE: Could you summarize the Navy’s overall position on these matters?

USN: Yes. I’ll be glad to. Senior officers believe these policies and regulations will bring the Navy to a new, high point of sensitivity toward its most vulnerable personnel. A marvelous future, rich in diversity, lies ahead of us.

TBE: One additional question, sir. Does the High Command believe potential enemies will show the same sensitivity toward our most vulnerable personnel?  Sir…?

Although the interview was fanciful, it does show how diversity and sexual harassment policies operate in industry, government, and the military. The item about Navy chaplains ordered not to use the name of Jesus in prayers is entirely accurate. In accordance with Navy policy, Chaplain Lt. Gordon James Klingenschmitt was ordered not to pray in the name of Jesus while in uniform. In protest, Lt. Klingenschmitt fasted for 18 days, until the prohibition was finally lifted. Subsequently he asked President Bush to issue an order guaranteeing chaplains the right to pray as they wish. (I could find no record that Mr. Bush ever issued such an order.)

Readers who had trouble following the Navy’s sexual harassment policy in the “interview” are not mentally deficient. Obviously, even the people cobbling these regulations and codes of conduct together don’t fully understand the possible implications and unintended consequences that could proceed from them. This is why companies and government agencies now hire Ethics Coordinators. These experts get paid six-figure salaries to explain the ethics policies of the company (or agency) to employees, because no ordinary person can grasp them.

When I started working, fifty-five years ago, ethics experts had not yet appeared on the scene. This was not because ethics wasn’t important, but because everyone knew what was (and wasn’t) ethical without being instructed. People being fallible, not everyone did the ethical thing all the time, but we all knew one thing from another, ethically speaking.

The big change in ethics, over that half-century, is that we have moved from an objective to a subjective standard of behavior. In the past, unethical behavior involved specific actions, like stealing or causing physical harm to another employee. Today, an action might be ethical or unethical, depending on who observes it. In many cases, whether a member of a “protected class” feels offended (or not) by actions or words is the ultimate determinant of ethicality. This makes ethics devilishly unpredictable. Offensive behavior is a significant risk to any organization.

To protect against the risk of unethical behavior that an employee might not even intend – because he cannot predict who might be offended – many companies now require employees to sign a “mandatory arbitration agreement” as a condition of employment. An applicant is hired only if he agrees, in advance, not to sue the company over an injury (or offense) during his employment. This lets CEOs sleep better, but lawyers say such agreements lack legal force, since you can’t be required to sign away a Constitutional right just so you can work somewhere.

You might sign a contract to become a slave, for instance, but the agreement wouldn’t be legally binding. Lawyers in my acquaintance say companies all over the country are completely exposed to the risk of behavior subjectively construable as “offensive” under ill-defined policies like the Navy’s “zero tolerance” policy against sexual harassment.

Our “interview” with the Navy also demonstrates that modern ethics have lost their grounding in Judeo-Christian morality. In the past, actions were generally considered unethical if they violated the (gasp!) Ten Commandments. (I shock myself by even mentioning them.) Most of the items in the Decalogue were considered either unethical or, at least, in very poor taste. Well within my lifetime, communities had laws prohibiting stores from doing business on Sundays. Publicly profaning the Lord’s name was either illegal or considered extremely gauche. Ditto for adultery. Stealing and murder were definitely wrong. (Now, not so much…)

All that has now been turned upside-down. Uttering a vulgarity in front of the wrong person can end your career. Profanity is no longer considered inappropriate, but praying according to one’s conscience in public can be construed as “offensive.” Adultery and bearing children out of wedlock are “life-style choices” which “sensitive” people no longer criticize.

This mess will not easily be cleaned up. It’s a perfect example of what happens when a society takes many small steps into the unknown without considering where it is heading. It also shows what happens when people think they know better than their forebears about right and wrong.

“Woe unto them that call evil good, and good evil,”1 says one of those dusty old prophets in the Bible. A former colleague told me he didn’t see why a modern society should base its laws or customs on “what was written in some old book.” The Navy’s morality play shows exactly why that “old book” is still important. But there’s always somebody who thinks he knows better. 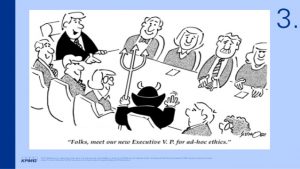