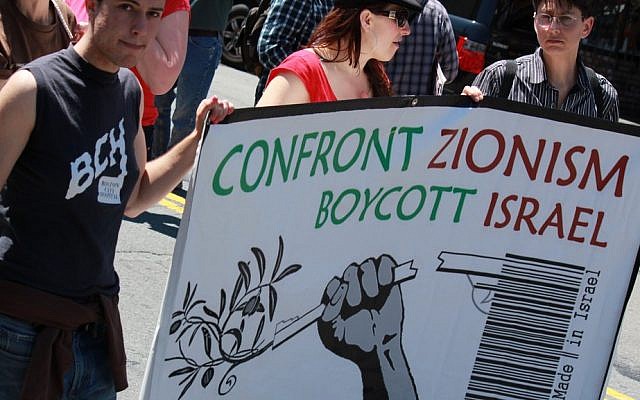 On 70th anniversary of Israel’s creation, the fire in the belly for Zionism has dissipated among liberals (including Jews)

Last month, I wrote of my outrage about how Democrat DC Councilmember Trayon White was able to abscond without any censure or reprimand from his liberal colleagues, despite making outrageous anti-Semitic statements, asking inane questions during a tour of the National Holocaust Museum in Washington (and then leaving the tour mid way), followed by the revelation that he donated $500 to a Nation of Islam event in February, where Minister Louis Farrakhan made a blistering anti-Semitic speech.

This, along with the welcome news of President Trump pulling the U.S. out of the 2015 Iran nuclear treaty that the appeaser Barack Obama orchestrated,  comes in wake of the 70th anniversary of Israel’s creation –  May 14, 1948.

One cannot understand the need for an independent Jewish state unless one understands the history of Jewish persecution, dating back to antiquity.  The Holocaust was the penultimate in anti-Semitism that spurred Democrat Harry Truman, to buck the advice of his advisers, and immediately recognize the new state of Israel.

And in succeeding decades, it was the Democratic Party that led the charge for Israel independence and Jewish interests. Robert Kennedy lost his life in 1968 due to his pro-Israel views. The late Sen. Henry (Scoop) Jackson was a champion for Soviet Jews and Israeli interests in the Senate.   Jimmy Carter brokered peace with Israel and Egypt.

Sometime in the 1990s, however, the Democrats started turning against Israel and Jewish interests.  Perhaps this was due to President Bill Clinton’s push for the “two state” solution, which resulted in creation of the Palestinian Authority and leaving Gaza in limbo.  I feel Israeli security is worst with the PLA.

But more so is the growing influence of the radical Hollywood/media/academic Left in the Democratic Party, which tend to view Israel not as a haven for an oppressed people but an “occupying power” that denies the rights of the so-called Palestinians (who frankly, are better off under Israeli governance than living in most of the Arab despotic states).

Obama’s election in 2008 pretty much closed the deal on Democrats and European Leftists becoming the anti-Israel faction in democracy.   Obama stuck it to Israel with the appeasement Iran nuclear treaty and the UN vote in his closing days in office.

Today, the Democratic Party tolerates anti-Israel, pro-Farrakhan politicians like Keith Ellison the Minnesota Muslim congressman, and the Left in Britain tolerates the anti-Semite Jeremy Corbyn as Labor leader.  Some of the recent Women’s March organizers denounced the anti-Semitic statements of key organizers like Linda Sarsour, but by and large, the anti-Israel Left goes unchecked.

Even here in Virginia, Democrats choose noxious anti-Semite in the 5th district as their congressional candidate, The Bull Elephant reported recently.

Despite the fact the American Jewish community will rise to Israel’s defense when attacked, and heavily fund a variety of organizations that support Jewish interests here and abroad, the reality is that American Jews do not return the favor that Republicans and Trump have given them.   Fewer than 30% will vote for a Republican for president, much less any Republican. As religious affiliations decline and Jews assimilate, the nature of American Judaism today is to be liberal first and Jewish second — or last.

And, as the nation grows more non-white, and due to the growing education and income levels of American Jews, it is difficult for a number of Americans, especially non-white folks and new immigrants, to see Jews as an oppressed or endangered group. In addition, “identity politics”  dictates that whites have “privilege” and so since Jews are by and large white and well off, they are not at risk. Even the Trump campaign’s Diversity Coalition did not count Jews as members (Latino, Muslim, Black, yes, but not Jews).

In addition, the Holocaust is fading from memory and importance – and I am afraid, even among Jews (especially the young).  The newspapers, TV and movies were fixated on the subject from the 1970s onward, but as the survivors and perpetrators go to their graves, the No. 1 rationale for a Jewish state, the Holocaust, has dissipated in our national conscience.  A recent poll of Millennials showed 2/3 had never heard of Auschwitz. Hollywood loves doing movies about the Holocaust, but rarely a pro-Israel movie or miniseries.

Even post World war II persecutions of Jews in Europe and the Middle East do not arouse the media and liberal community as much as an “alt.right”  rally in Charlottesville, where a protester was run over by a neo-Nazi. Islamofascists killing Jews in France, and it’s off the news pages within a week.

By the way, most American Jews support the Iran nuclear deal and oppose Trump and Republicans, despite his support for Israel.

Thankfully, we have a Republican Party stands up for Israel and Jewish interests, and a President, Donald Trump, who has done more for Israel than any recent president, notably scuttling the Iran nuclear treaty and moving the U.S. embassy to Jerusalem (finally).

This Jew is thankful to Republicans, and especially evangelical and conservative Christians, for their stalwart support for Israel and  Jewish interests here and abroad, and for denouncing and attempting to crimp the draconian anti-Israel boycott/divestiture/sanctions (BDS) movements on campuses.

On this 70th anniversary observance I feel confident Eretz Israel can survive but only if the United States and Western nations stay vigilant against radical Islam and terrorism and if they recognize that there are always going to be groups and individuals on the Right and the Left who do not like us or distrust us.  Unfortunately, a number of my fellow “Members of the Tribe” have seemed to lose some interest and are too engulfed in liberal socialist dogma and identity politics to take an active interest and denounce anti-Semites like Ellison, Trayon White or Jeremy Corbyn.

Holocaust and Israel was last modified: May 11th, 2018 by Guest Contributor Ken Reid

A great piece. I have often wondered why so many American Jews shoot themselves in the foot. Israeli Jews do not seem to believe they have to be left-wingers in order to be Jewish, hence Bibi having been elected PM for so long.

I hope this is a “Kanye West” Moment for moderate Jews who may just blindly follow the Democratic Party because they were taught to do so from childhood.

What do Republicans gets out of supporting Israel then? Jews in the US vote probably in the 80 percent range for Democrats. Might as well pull out of the Mideast, let Israel fend for itself and see if you get more peace/ non aggressive war mongering oriented voters.

In many Christian denominations we have active movements to water down the gospel in favor of a water-downed grace without truth Unitarian theology. Are similar movements occuring in Jewish synagogues to water down the Torah so that it basically becomes a Unitarian faith without any fundamental tenants of faith?

Yes. Since 1973, there’s been a Humanistic Judaism movement with a number of synagogues around the nation. Essentially, they are Jews that do not believe in God. It’s not a big movement, but the most signfiicant change of the last 15 years or so is the embrace of “social justice” in sermons and religious education among the established Reform, Reconsructionist and Conservative movements. I was a member of a Conservative congregation in Leesburg for about 10 years and left (as did a number of traditionalists) due to its growing liberalism (and cost). We went to CHABAD, a Hassidic movement with incredible outreach. The turning point may have been in 2005 when the Conservative movement embraced same sex marriage . As a result of abandoning religion for politics plus the cost, the Conservative movement is dying; Orthodoxy is growing, especially CHABAD.

See the link below to see what Trump and Republicans were paid to ignore SOD Mathis, and Joint Chief of Staff Chairman Dunford, and throw America under the bus by backing out of the Iran Deal. You have confused anti-semitic with your anti-American BS once again. These are the cold hard facts.

The Democrat Party is in the process of discarding Jews for Muslims. Money from the oil rich mid-east neutralizes the wealth of the American Jews and it is rather obvious that Muslims are outbreeding Jews. You have to wonder just how long supposedly liberal ideas will keep Jews faithful to a Democrat Party that heaps constant abuse on them. You would think Ellison was a pretty significant signal but paradigm shifts are tough particularly in politics – see #nevertrump over at bearing drift as an example within republican circles.