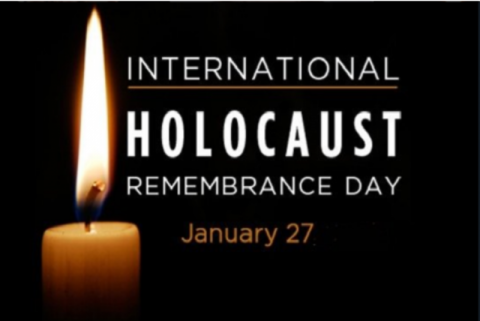 Wednesday was International Holocaust Remembrance Day, which observes the day in 1945 when  Soviet troops liberated the Auschwitz-Birkenau Nazi death camp, where up to 2 million were murdered, mostly Jews.

I was in Israel this time last year when international leaders like Emanuel Macron, Mike Pence, and Vladimir Putin came for a big Tribute â€“ the 75th anniversary of the Auschwitz liberation.

But the â€œShoahâ€ (destruction, in Hebrew) has faded in significance with a growing part of the population, except among Jews.  As the memory of the 6 million seems to fade, the Holocaust has become a convenient tool of the Left to bash the Right, especially the Jan. 6 Capitol Hill assault by Trump supporters and an array of far-right groups.

Itâ€™s customary for the White House and an array of politicians to issue statements of sympathy on this day.

Joe Bidenâ€™s statement didnâ€™t bash Trump or mention the assault, but he said the following:  â€œThe horrors we saw and heard in Charlottesville in 2017, with white nationalists and neo-Nazis spewing the same anti-Semitic bile we heard in the 1930s in Europe, are the reason I ran for president. Today, I recommit to the simple truth that preventing future genocides remains both our moral duty and a matter of national and global importance.â€

Thank you, Joe, for not regurgitating the lie that Trump said there were â€œgood people on both sidesâ€ of that Charlottesville conflict (He said he was not referring to the neo-Nazis who marched).  But when it comes to genocide, the Obama-Biden administration stood by while ISIS butchered 5,000 Yazidis and Boko Haram in Nigeria killed some 4,000 Christians

And, his administration is about to revive the Iran nuclear deal , which dooms Israel.

â€œJust a few weeks ago â€“ on January 6 â€“ we saw insurrectionists take over our nationâ€™s Capitol building in shirts that read â€˜6 million was not enoughâ€™ and â€˜Camp Auschwitz.â€™  The Anti-Defamation League reported an all-time high of antisemitic incidents in 2019 since the group starting tracking incidents in 1979. They recorded 2,100 acts of antisemitism which led to five deaths with a 56% increase in assaults from 2018.â€

Maloney acknowledged loads of attacks in New York, but doesnâ€™t say that much of these are not committed by white supremacists, but blacks who resent Orthodox Jews expanding into â€œtheir neighborhoods.â€

What Maloney doesnâ€™t tell you is that 33% of those New York attacks are by blacks against Orthodox Jews whom they resent for expanding into â€œtheir neighborhoodsâ€ and there is no ethnic breakdown on the 66% listed as â€œwhiteâ€ (probably a goodly number are Latino).

Rep. Charlie Crist of Florida, a former Republican, said:    “For Holocaust survivors and their families, the images of rioters storming the Capitol â€“ one wearing a â€˜Camp Auschwitzâ€™ sweatshirt – were shocking, but not new. Nationalism, anger, bigotry, and misinformation are the unholy forces that brought about the Holocaust. And they are the same forces that led to the deaths of five Americans at the US Capitol on January 6.

“To see these forces rise again in America, coupled with conspiracy theories like QAnon rife with anti-Semitic rhetoric, is yet one more example of why â€˜Never Againâ€™ is not a statement of fact, but a call to action.â€

Democrats, Hollywood and the leftist literati seem to have carte blanche to use the â€œHitler cardâ€ against conservatives and say whatever they want without any accountability, but then turn around and deny the existence of non-white (i.e. Arab) anti-Semitism and choose to put all the onus on white supremacists.  The Left also has disdain for Israel for its â€œtreatmentâ€ of the Palestinians.

As a Jew, I have not faced much anti-Semitism, and never among my fellow Republican and right-wing activists, despite what liberals may think.  However, anti-Semitism is still endemic in society.

I grew up in the 70s and 80s when new revelations about the Holocaust appeared in books and films and Nazi war criminals were being hunted, found and tried. The penultimate was the opening of the US Holocaust Museum in Washington in 1993.

But today, there are few survivors or perpetrators alive and the History Channel and PBS almost never rerun documentaries on the Holocaust.  Israel has become the â€œbad guyâ€ to the Left due to the Palestinian conflict and anti-Semitism is now anti-Zionism, and the Left denies it.  While most anti-Semitic attacks in the U.S. are committed by neo-Nazi/skinhead types, most of the serious attacks in Europe, for example, are triggered by Muslim  anti-Zionists, and the anti-Zionists and multiculturalists influence our youth via the universities.

I have never been able to document whether I lost relatives in the â€œShoahâ€ (destruction) as we say in Hebrew but have been a student of the Holocaust for some 40 years.  The â€œHolocaust Revivalâ€ of the 70s and 80s probably moved me closer to embrace Judaism, and now I am Orthodox.

So, I kind of resent how politicians will use the Holocaust to make political points, including when Republicans use the â€œHitler card.â€

The Holocaust should not be politicized or trivialized, same goes for other genocides of the last century.