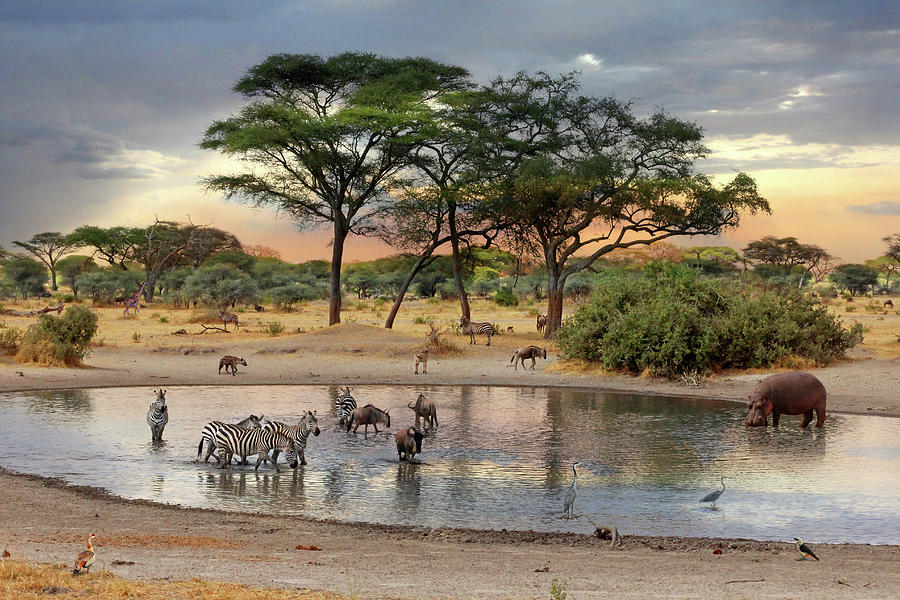 Hope, The Waterhole of Humanity

“When people of character, grit, and common sense come together around the waterhole of hope and refresh themselves, miraculous things happen.”

The year’s longest night arrived with the winter solstice in the Northern Hemisphere on December 21. [Because the calendar year is off from the earth’s rotation around the sun by a quarter of a day, the date can vary, though infrequently.]

Ancient people gathered in various ways to mark the winter solstice. In virtually every culture around the world, their traces can still be found in obelisks, stone monuments, ruins, and art forms. They worshiped or celebrated in often elaborate festivals as varied as the peoples’ who gathered.

But it doesn’t seem coincidental that the ancients gathered on the exact day that the long nights would finally tumble over to incrementally longer days.

The increasing daylight would expand their world and declare the coming hope for spring. Hope always made another day possible â€“ it promised new life.

We moderns barely notice or care about the winter solstice now. Our world runs by a set date and month on a calendar. Yet, the last week just after the solstice is still celebrated more than ever. It’s a whole week bracketed by Christmas and the New Year – because, like our ancient kinfolk, we, too, yearn for hope. We are anticipating change.

We expect things to improve or get better, be better, or work better. Sometimes, of course, hope is merely wishful thinking, like buying a lottery ticket. Regardless, the yearning for it never ends.

Hope is the waterhole of humanity.

Some scholars believe the birth of Jesus was moved to late December in the 4th Century AD to accommodate the solstice celebrations of late December and the new year marked by celebrations on January 1, instituted by Julius Caesar in 46 BC with the Julian calendar – and later reaffirmed by Pope Gregory Xlll in 1582. Perhaps, who knows? [The Bible mentions no date or month. It’s one of those unanswerable questions – an example of God telling us what we need to know, not what we want to know.]

Still, the Christmas story is about ageless Hope who visited the earth as a person. He is the hope of the world. And us. And the brand new start of a new year seems the perfect conjunction to begin – or refresh – the hope in something eternal that transcends our few years on earth.

Hope in the Bible carries a different dynamic than our modern usage. Hope is a critical factor in the life of the “righteous” and “the God-fearing.” Hope is to wait and trust expectantly.

The word is used nearly 60 times in the Old and New Testaments and is always associated with reliance on a God who never fails. In the New Testament, the Book of Hebrews, 11:1 explains, “Now faith is confidence in what we hope for and assurance about what we do not see.”

The Apostle Paul explained in Romans 8:24, that “For in this hope we were saved. But hope that is seen is no hope at all. Who hopes for what they already have?”

Without hope, life and death lose their meaning. That isn’t confined to people of faith. A hopeless life, a hopeless future, a hopeless situation gnaw at any and every human soul, smothering the spark of life. Hopelessness trespasses against the will to live â€“ to struggle and overcome.

Across the pages of human history, kings, conquerors, totalitarians, thugs, cartels, and – dare we say? – modern governments routinely crush hope to control people. Look no further than the soul-crushing lock-downs and masking of the last two years. They were based on no medical or scientific evidence whatsoever and had, obviously, zero impact on the pandemic. But they worked very well in crushing hope â€“ the evidence is skyrocketing loneliness, depression and suicide rates, and historic drug overdoses and addictions.

If 2020 and 2021 taught us anything, they reminded us of the unpayable cost of hopelessness.

When people of character, grit, and common sense, come together around the waterhole of hope and refresh themselves, miraculous things happen. I believe that average people, working people, will be the “town criers” of this new year. The hopeless, life-crushing dictates of our failed ruling and “expert” class (and their cronies in the national scientific and medical “industries”) will reap the scorn they have so richly earned.

Hope will return. Not a sentimental hope that is a mirage of what we want life to be. But a stubborn, rock-solid hope that we humans have employed for innumerable generations to make our lives meaningful and prosperous. Hope in the God that never fails. Hope in our expectations. Hope in ourselves. Hope in a blessed new year!

Hope, The Waterhole of Humanity was last modified: December 30th, 2021 by Michael Giere

Thanks, Michael for this thoughtful and appropriate holiday piece.

The idea that Christianity somehow â€œusurpedâ€ some sort of pagan winter festival has been around since the beginning. It is a way of lessening or denying Christâ€™s birth. The reality is that December 25 is supported in Scripture. The Bible tells us that Gabriel announced the conception of John the Baptist to his father Zechariah during his priestly rotation which fell in the period of Sept 22 to 30 in the modern calendar. This is found in 1 Chron 24:5. The Annunciation to the Blessed Virgin took place when Elizabeth was 6 months into her pregnancy, Luke 1:26. The would have put the Conception of Jesus around March 25. 9 months later, December 25. QED!

Thank you for being a reader. I was making the larger point that the Hope of mankind and the hope of a new year merged into the same week, regardless of how. I didn’t endorse the idea. I’ve written a lot about Christmas over the years from many different angles, and I accept that December was accurate. There are the hints in Scripture you mention, and there are even others made by people I respect as well. The early church never mentioned it evidently, but when the date of December 25 was used in the late third century, the “church” didn’t seem to take issue with it. That, to my mind, may be the best evidence that the December date was widely accepted as correct by our spiritual ancestors. Reasonable believers can differ on the date, but, I was driving to a different point. Happy new year and blessings to you.