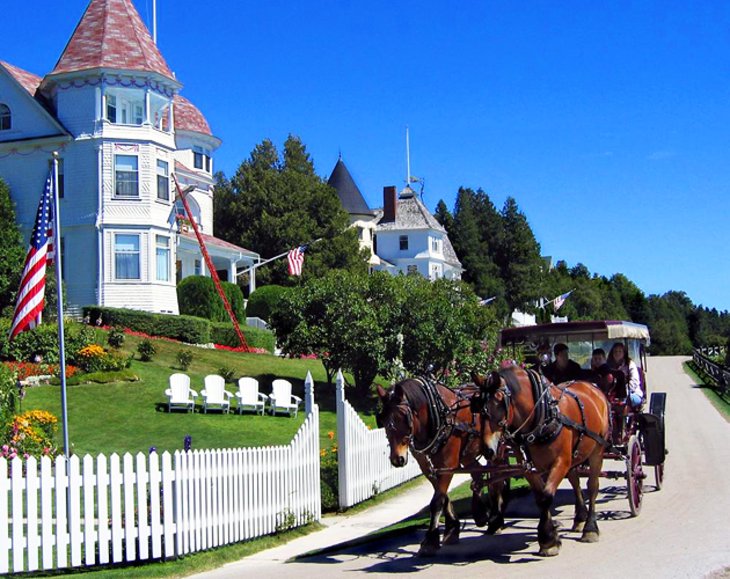 In Merrie Olde England of the 17th century, fire-fighting companies sold medallions to city residents. The medallion was displayed on the outside of the house (above the level where it could be filched by idle passersby). Should a fire break out – very common then, since cooking and heating used open flames – and you summoned a fire-fighting company, that medallion might be critical. If the fire-company recognized it, they would fight the fire and try to save your house. But if the medallion wasn’t theirs (or you had none), they might let the house burn down. It wasn’t their responsibility. (Maybe the “good old days” weren’t really all that good.)

Speaking of the old days – one summer we visited Mackinac Island, Michigan, up in the Mackinaw Straits where Lakes Michigan and Huron meet. The magnificent Grand Hotel there was the shooting location of the 1979 film “Somewhere in Time,” starring Christopher Reeve and Jane Seymour. To retain an 1880s flavor, the island limits wheeled transportation to horse-drawn vehicles or bicycles. As we clip-clopped around the charming place in a horse-drawn cart, a member of our party wrinkled her nose. “Does it always smell like this?” she asked – referring to the rich, fecund odor of horse-droppings in the summer heat. (The horses had been busy.)

“Everywhere smelled like this in 1880,” I replied to my companion, whose delicate 21st century nose had been offended. True, the 1880s of nostalgic memory had neither car-exhaust pollution nor high gasoline prices. But horse doo-doo was such a problem that New York City employed 5,000 workers in 1900 just to sweep it up. Thousands died every year from typhoid fever spread by flies that swarmed the excrement before it could be removed. Sadly, the Green movement was still decades away, so unenlightened New Yorkers of that time didn’t realize that they could have saved the planet by using that all that dried poop as eco-friendly fuel. A tragic missed opportunity.

But I digress with these horse-tales. It was the fire-company medallions I thought of this week when I received another friendly call from a deep-voiced “representative” of the Police Benevolent Fund. I get at least one such call a week.  The caller was soliciting contributions to help the families of officers who have died in the course of their duties. Attuned to nuances of voice, I could easily picture a tall, booted, impeccably uniformed officer asking to see my license and registration as he towered over my automobile.

“Can I put you down for the gold medallion ($100), the silver ($70) or the bronze ($45), sir?” asked my deep-voiced caller. Non-participation was conspicuously absent as a choice. My participation was assumed. But the word “medallion” sprang out at me. I responded with my standard spiel – i.e., that I never do charitable transactions over the phone and would gladly look at their material if they sent it to me. It’s a polite “maybe” that usually gets the caller to move on to more fertile fundraising-fields in his telephone campaign.

In this case, however, the solicitor pressed me further for a commitment, promising that the requested material would be sent posthaste. Now visualizing increasingly stern dunning notices from the police over my delinquent telephone “pledge,” I declined again.

“It’s really not asking very much, sir,” he boomed in a slightly wounded tone. “These people have served your community.”

That was when I asked the caller if he was actually with the police. His “no” exorcised my vision of the booted storm-trooper as I realized that I was talking to a guy from central (voice) casting. That knowledge emboldened me to elaborate. As politely as I could, I told the central-casting guy that I didn’t like the smell of the police soliciting “donations” from folks who – unlike myself – might fear not to give.

“There is a little too much of ‘Vee know who you are, vee know vere you liff’,” I said. For a pregnant moment, one might say, he was speechless, which must have been a new experience for him. I surmised that while other nervous solicitees might have thought the same, none had actually said it. I thanked him for his call and rang off before he could launch a new baritone offensive.

A standard old people’s joke is that “it’s not paranoia when you know they’re out to get you.” (Why don’t these jokes seem as funny as they used to?) OK, I’ll admit that I might be a little round the bend on the police benevolent fund thing. The central-casting basso was probably just a short, harmless guy checking Yes or No boxes on a list of names.

But in the computer age, it’s not much of a stretch to imagine your real, uniformed patrolman checking on-line, when he pulls you over, to see if you donated to the Police Benevolent Fund, and whether your donation was the Gold, Silver, or Bronze medallion – or if you gave the solicitor a hard time. It’s probably unlikely, but wouldn’t it be better to avoid the problem – even the appearance of the problem – altogether, by eliminating fundraising that implicitly has the long arm of the law behind it?

Suppose utility companies solicited “donations” to employee benevolent funds? Wouldn’t you wonder if your non-donation was related to having no power for a week after a storm? Or what if the “IRS Employees Benevolent Fund” started calling to raise money for agents injured in the line of duty, etc.? Would you really have the nerve to refuse?

Obviously, all of these are unsuitable, and we would be better off without them. Besides, how much of that money really reaches police “families”? I don’t know. (Do you?) Despite several requests, I have never received any printed info that identified a particular association, or its fundraisers, or the fundraisers’ fee. A friend who is a retired DC fireman says he never gives to either police or firemen’s “benevolent” solicitations because he knows little of that money actually reaches real police or firemen, or their families.

No, the “police benevolence” fund-raising won’t bring down the Republic. But if we can make drivers and passengers use seat-belts, and can make smokers stand outside in the rain, we ought to be able to restrain “virtual” cops from putting the arm on people for “donations.” I’d like to see this trend arrested before it catches on in a wider venue.

Of course, in the good old days life was simpler. There were no telephones, computers, databases or their accompanying abuses. But your house might burn down while the fire company stood by and watched because you had no medallion. You could also die from diseases spread by horse-droppings. Every era has its problems. (Watch your step around those horses…) 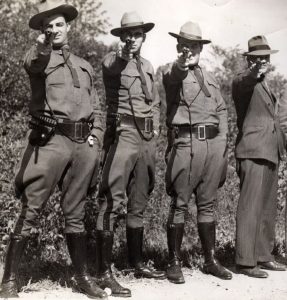