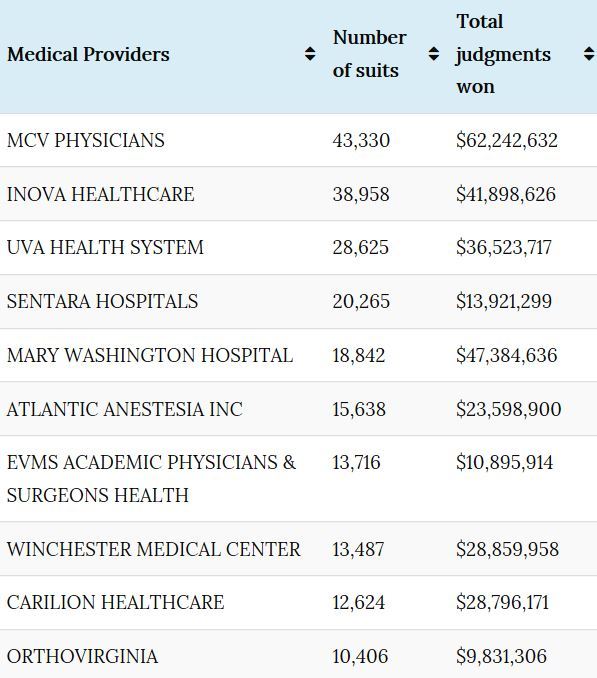 Hospital Collections Are Ugly but Not the Real Problem

I have big issues with the way hospitals conduct business in Virginia, especially the highly profitable nonprofit hospitals, as I have repeatedly made clear on this blog. But there’s one thing I don’t have a problem with — the fact that they try to collect their bills. Some observers find that practice problematic. Witness the recent story published in the Virginia Mercury, which kicks off this way:

Annie Washington is 60 years old, has diabetes and no insurance. If she needs to see a doctor, she winds up in the emergency room. But while hospitals can’t turn indigent patients away, they can still bill them. And when patients can’t afford those bills, collection lawsuits often follow.

“I work at McDonald’s,” the Henrico County resident said after a recent hearing over an $860 lawsuit filed by the doctors group that staffs VCU Medical Center. “There’s no insurance there.”

Virginia medical providers filed more than 400,000 lawsuits over the past five years, netting more than $587 million in legal judgments against their patients, an analysis of state court records by the Virginia Mercury has found. The review relied on data collected by virginiacourtdata.org, which aggregates online state court records.

Virginia Mercury deserves credit for plumbing a data source which heretofore has gone unreported upon. I appreciate the reporters’ enterprise. But I take issue with the implication that there is something disreputable about making an effort to collect unpaid bills. The capitalist system is based upon the premise people pay for the things they buy. The underlying problem with Virginia’s health care system is not that hospitals ask people to pay their bills but the insane way — insane, as in utterly disconnected from reality — that they calculate the bills in the first place.

Hospital charges, which are deeply discounted for Medicare, Medicaid and private insurers but not for individuals, are obscenely and unconscionably high. Many people, perhaps most people, are unable to pay the charges. But what are hospitals supposed to do? Not bill people without insurance? Or, if they don’t pay, make no effort to collect? If it is widely known that there are no repercussions for failure to pay, what incentive is there for anyone to pay?

Hospitals routinely provide charity care and write off unpaid bills. But how are they supposed to know who has the capacity to pay and who doesn’t unless they try to collect?

Sentara Health System, according to Virginia Mercury, uses predictive data analytics like credit scores to surmise who might be able to may and who might not. Bon Secours has adopted a policy of forgiving the debt of anyone whose income is 200% of the federal poverty level. That’s all very admirable, but there’s always a cut-off at which the people just below the line (whether credit score or income) get off free and people just above the line get stuck. A precept of the welfare state is that no matter where you set the line, there is always someone who draws the wrong side of it and there’s always someone deserving of compassion. Because there is always a victim, there is always a reason to draw a new, more forgiving line. That is not a sustainable model for a health care system.

If we want to address root causes, we must address the skyrocketing price of healthcare — both the cost of providing the care, caused by the cartelization of the industry, and the setting of insanely high nominal prices, the sole purpose of which is to establish a starting position for negotiating with insurance companies.

James Bacon is the publisher of BaconsRebellion.com

Hospital Collections Are Ugly but Not the Real Problem was last modified: August 11th, 2018 by Guest Contributor James Bacon

Been doing some research to counter my idiot progressive brother’s contention that we can have Medicare for All per the Democrat Socialist Mania spawned by Ortorio Ocasio Rosanna Danna Anna’s victory over Democrat Establishment stooge Joe Dempsey.

You GOP Inc dopes better put down your corporate donations and take heed to what she is saying. As you have opened the border to this sort of thing with a horde of Democratic voters that are swamping you in many states– your new amigos are all for free medicine, education, food, housing and whatever else the Democrat Socialist vote in….

Ocasio Rosanna Danna Anna is picking up the Medicare for all mantle… That is even by liberal estimates a whopping 32 trillion dollar cost over ten years. And that is bovine matter laying on the barnyard. No government program ever lives up to its billing in terms of cost.

I can’t imagine how much the payroll tax will have to be increased to pay for free Medicare for everyone… even our illegal friends!

Thanks you @$$holes at Bearing Drift!!! You and your beloved corporations have led us to this slaughter through importing a huge voting block of Democrats… umm… now they are Socialist Democrats!!! They are moving the corporate Democrats Left… and soon we will be longing for the likes of Hillary Clinton and Barack Obama… cause you are going to get free stuff good and hard.

“Blahous’s paper, titled “The Costs of a National Single-Payer Healthcare System,” estimates total national health expenditures. Even though his cost-saving estimates are more conservative than others, he acknowledges that Sanders’s “Medicare for All” plan would yield a $482 billion reduction in health care spending, and over $1.5 trillion in administrative savings, for a total of $2 trillion less in overall health care expenditures between 2022 and 2031, compared to current spending.”

AdamRuins Everything – The Real Reason Hospitals Are So Expensive….

It’s shear fantasy to think that any problem in this country can be solved under the current campaign and PAC finance laws. The Catholic and a Jew SCOTUS “MICKEY MOUSE” corruption court has ruled that the rich have the right to purchase congress, legislation, and the White House like a cheap $2 whore, and do as they please.

Try paying $5 a month on a bogus pumped up medical bill in the thousands or even hundreds of thousands of dollars, and see where it gets you. Patients who have no insurance will get to see doctors who probably have a track record of screw ups and should most likely not be practicing medicine. The good doctors work for the rich and connected under capitalism.

PS- Why didn’t you list Bon Secours? You Catholic or didn’t want to offend them?

Hospitals routinely write off bills that patients cannot afford to pay. Nobody is driven into bankruptcy by a hospital. You’ll never find a better creditor than a hospital. If you make any reasonable attempt to pay any reasonable amount against your bill, you’ll likely have no problem, even if you can only afford to pay $5 per month. The only way to get in trouble with a hospital bill is to just completely ignore it and refuse to acknowledge your own responsibility at all.

Everything costs money, pal. The fantasy of “free” government controlled health care is a false utopian dream. We are all personally responsible for paying for the services we use.

My comment above is directed at “Eric the half a troll”.

When people are driven into backruptcy by their hospital bills, those charges do not evaporate into the ether. We are already all paying them – and more. It is a very inefficient system. So by supporting the pre-ACA system, it is you who wishes to redistribute my wealth to for-profit insurance companies and hospitals. Please stop.

Why are we the only country in the developed world where people are routinely driven into bankruptcy just because they get sick? This is the system CONservatives wish to perpetuate.

Hospitals routinely write off bills that patients cannot afford to pay. Nobody is driven into bankruptcy by a hospital. You’ll never find a better creditor than a hospital. If you make any attempt to pay any reasonable amount against your bill, you’ll likely have no problem, even if you can only afford to pay $5 per month. The only way to get in trouble with a hospital bill is to just completely ignore it and refuse to acknowledge your own responsibility at all.

The real problem is who pays the difference. The system we have now is simply informal socialized healthcare, with backdoor wealth transfers to the poor. If you think the government can change this informal system by running it with their own bureaucracy, you should be careful what you wish for.

Don’t confuse Eric the Halfwit numbnuts with facts… he gets his stuff from Media Matters and it is just drivel he posts.

Well, of course we don’t know exactly why each person files for bankruptcy but generally there is agreement that medical debt is the leading contributing cause. Also, there is this trend in the reduction in the number of people having trouble paying medical bills since ACA was passed.
https://uploads.disquscdn.com/images/3a34cbbf654253d70284e6f95cf5c4da91cd6b3b46d02048734622c7ea466b6d.jpg

“This is the system CONservatives wish to perpetuate.” when why did the 100% Democrat controlled government at the time give us the health insurance industry friendly Unaffordable care Act instead of Medicare for all which would have actually helped?

Simply because of Moderates and Lieberman. Alas, had they done so, we wouldn’t have the troubles we have today.