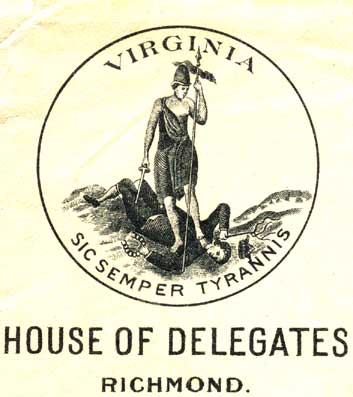 House of Delegates Passes Amendment Cutting the Budget by a Billion

The Virginia House of Delegates has passed amendments to the 2014-2016 biennial budget that call for “$1 billion less in general fund spending than the originally adopted two-year budget, eliminate $11.7 million in fees and $33 million in debt proposed by the Governor,” and that purport to reject Obamacareâ€™s Medicaid expansion. The amendment now goes to the Governor for his signature.[read_more] From a House GOP caucus press release:

â€œWhile Washington drowns in deficits and debt, weighed down by partisan gridlock, Republicans in Richmond are painting a stark contrast. Not only have we produced a balanced budget as our Constitution requires, but we have done so ahead of schedule and with greater transparency than any time in recent memory,â€ said Speaker Howell. â€œBy adopting these budget amendments today, the General Assembly is charting a prudent fiscal course for the remainder of this budget cycle and demonstrating how governing is supposed to work. I thank Chairman Jones, Vice-Chairman Landes, Leader Cox and the entire House Appropriations Committee for their leadership and hard work to get us here today.â€

House of Delegates Passes Amendment Cutting the Budget by a Billion was last modified: February 26th, 2015 by Jeanine Martin

Look – General Fund Revenue is driven by economic performance. Since the original budget was built on estimated economic numbers over a year ago – the baseline was bound to change especially given Sequestration and other economic factors – oil prices etc. They first adjusted downward hundreds of millions – not necessarily a cut as much as it was projecting less revenue. Then…after the Governor offered his amendments to the budget in December, the revenue estimates changed – a lot. So, that does not create an action of the government that produces more spending. That is a reality of the economy. A lot of the cuts occur in areas that are really deferred expenses. There is a balance in the conversation that is never struck on budgeting. Heck, some candidates are even trying to say Non General Funding has exploded because of legislators cranking up spending when in reality almost all of the NGF is pass through money on Medicaid and college tuition. You can make the spending argument more soundly and without all the mass hysteria. I chaired for 6 years the Cost Cutting Caucus – your inclination bends to honest to goodness fiscal conservatism and there is a lot to be gained from it, but when arguments are so easily shot down due to inaccuracy, one loses immediate credibility with whom one is trying to persuade. Cost drives price. Price is what the taxpayers are charged. Focus on costs.

Any word on if Speaker Howell plans to repeal his signature achievement in his 28 years in the Virginia House? His tax increase, the largest in Virginia history, HB 2313.

I would not want to short change Senate Majority Leader Norment. So, I guess in all fairness, Tommy Norment owns it also. Let’s give credit when due.

I ain’t drinking this Kool-aide.

I plan on spending thousands less this year too. My credit card hit the limit and I can’t get a new card with 0% interest. I even had to cut back on using my Pay As You Go card because my balanced budget would have come up short. Hope my local taxes don’t go up because of the state’s spending cut.

This is a baseline budgeting game that two types play well manipulators and liars, its been the staple of federal budgetary fairy tales for over 30 years. It you did a true state budget to expense cost buildup over the past 5 budgetary cycles – bottom up, people would be appalled at the massive growth and outright waste instead they get these misleading, outright falsehoods from the current leadership and believe they have something to celebrate about. This whole state needs one massive, third party forensic audit letting the chips fall were they may. ITS NO ACCIDENT that the state budget and revenue models are so opaque and difficult to understand even for the motivated, informed citizen activist. These type of practices have gone on in Virginia for a LONG time and are not simply a partisan issue. People you are being duped with bs like this press release.

If you look beyond the propaganda from Bill Howell, you’ll see that this conference report spends more money than either the House or Senate initially approved. The final budget amendments, assuming they pass the Senate, represent a 9.6% ($65 million) increase over what Terry McAuliffe initially requested.

McAuliffe asked for $684 million in increased spending, the House proposed increasing spending by $486 million, the Senate by $744 million, and the “compromise” between them ended up adding $750 million to the budget.

To claim in any way that this is a fiscally responsible budget is utter hyperbole, and in violent disagreement with the truth. We got a government spending increase, and Howell and Norment own it. They have the distinction of being even bigger spenders than T-Mac.