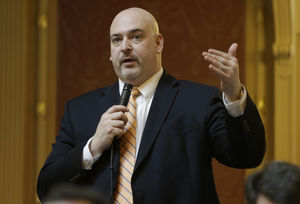 The House of Delegates has passed a bill to give victims of domestic violence a concealed carry permit when they take out a protective order.  The bill’s (HB766) sponsor, Del. C. Todd Gilbert, R-Shenandoah, said

“This bill gives victims power, a protective order is a piece of paper.”

While Democrats argued that the bill would make women less safe, Republicans believe it will give women a way to protect themselves in a crisis.  During the floor debate Delegate Gilbert said

“There are those of us on this side of the aisle who philosophically don’t believe you should have to get your government’s permission to protect yourself in any way you see fit,”

“(when someone)finds themselves legitimately scared” they shouldn’t have to wait in line to “avail herself of the God-given right of self-protection,”

Del. Marcus B. Simon, D-Fairfax believes the bill will make victims less safe because they haven’t been trained on how to handle a gun safely,

“I just believe that that makes those people more vulnerable,” Simon said. “It makes them less safe.”

Anyone who uses a concealed carry permit under these circumstances would be required to take a gun safety course within 45 days.

The bill passed along party lines by a vote of 69 to 28 with some Democrat support.  The margin makes the bill veto proof in the House. The House of Delegates also passed several other gun bills last week.  See details on those bills here.

Is the other party going to know about the protective order before they get gunned down?

So, if somebody wants a concealed carry permit, just take out a protective order, and receive the permit in the mail in a few days?

If you are a victim of domestic violence and have a protective order in-place you can conceal carry without a permit.

It will never fly.

Why? The idea is sensible.

Shenandoah County has the best delegate in Todd Gilbert!

That’s an outstanding idea and makes perfect sense. If the situation is such that you need a protective order, you should be allowed to conceal carry.