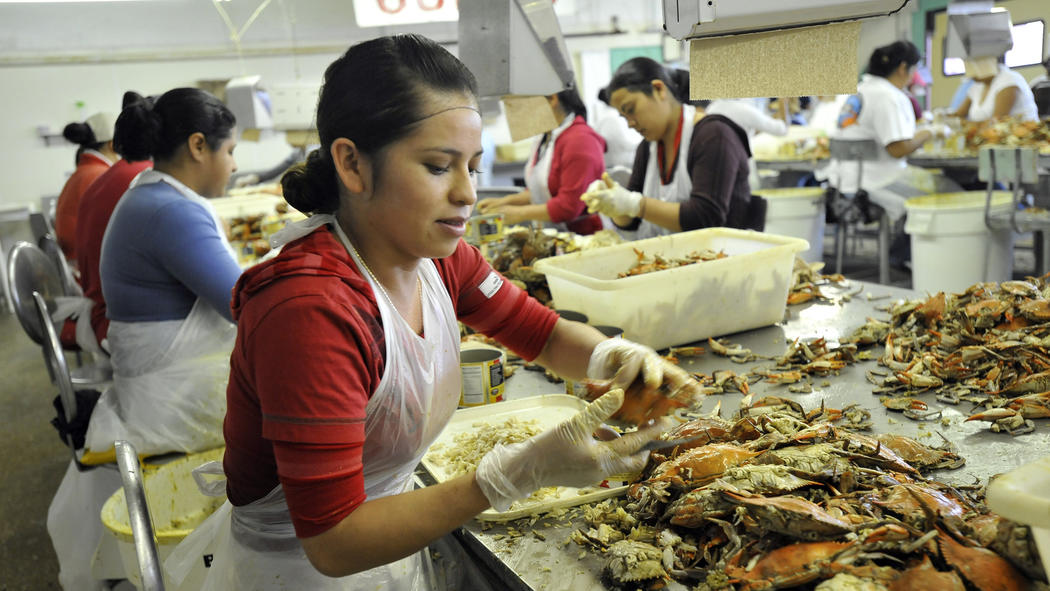 The latest immigration bill in the House will triple the number of low skilled immigrants admitted to the US for seasonal work.  It is hoped that this will appease some Republicans from states who currently hire large numbers of illegal immigrants to pick fruits and vegetables, pick crabs,  work in amusement parks, and mow lawns.  From Politico.com,

Goodlatte’s proposal would also create a new visa program for foreign workers in the farming and food-processing industries. American companies would be allowed to hire 450,000 foreign workers for three years under the plan, provided no U.S. workers could be found who would do those jobs.

That last sentence makes my blood boil because it leaves off the phrase, “at that price”.  It should read “provided no U.S. workers could be found who would do those jobs at that price”.  If companies raised the pay for those jobs, they could hire Americans.  Currently there are few Americans who want those jobs because the pay is so low they can stay home, receive assistance, food stamps and housing.  Why bother to work?  Raise the pay and many Americans would take those jobs.

How many of these 450,000 workers will simply stay in the country, never returning to their home countries?  Is it worth it to Americans to pay a bit more for corn and crabs to have Americans doing those jobs?  Apparently company owners think not.  They’d rather hire lower paid immigrants.

Jim Jordan of the Freedom Caucus is opposing the bill.  From the Hill.com,

Speaking on The Hill TV’s “Rising,” Jordan, a founding member of the conservative House Freedom Caucus, said that the conservative bill introduced by Rep. Bob Goodlatte (R-Va.) is the only legislation consistent with what Republicans promised voters in 2016.

“That bill is the right bill,” Jordan said. “It’s the one we told American people we would do and it had 193 votes last week based on who was here. We only needed 19 more votes to pass.”

The Goodlatte bill was rejected in a floor vote last week, though in gaining 193 GOP votes against united Democratic opposition, it did better than expected.

But Jordan had little of anything good to say about the compromise measure GOP leaders are brining to the floor on Wednesday.

He insisted that the substance of the conservative bill  — reducing legal immigration and funding construction of President Trump‘s border wall — needed to remain in tact.

“If there are small tweaks we can make to that bill, let’s do it,” Jordan said. “But that’s the one that’s consistent with the mandate of the election.”

The more conservative Goodlatte bill that Jordan is referring to was supported by all Virginia Republican members of the House, except for Barbara Comstock.

The vote for this new immigration bill will be on Wednesday.  Let your Congress critter know how you feel about it.

Read more here and at the links above.

There is no such thing as cheap labor. It has to be subsidized. The US and other Western countries teeming with migrants at their borders.. ECONOMIC MIGRANTS (that is for you you nitiwit, half troll or Arthur Olson) offer up free education, healthcare, welfare, WIC Section 8 Housing.. EBT… Aid to Dependent Children…

Out of one side of their mouths, Democrats like our Boy Eric will tell you about how Walmart exploits the US system because their workforce is on welfare… See liberal studies a few years ago. They hated the Waltons because they were big contributors to W Bush… Hey Eric.. you might want to look at how that Defender of Democracy Jeff Bezos treats his workforce… seems that they are on welfare too..

Then they’ll tell you bout how all of the millions of border crossers are going to save the economy or the Social Security System!!

Cheap labor is not saving our economy… it is being subsidized.

Which is a note to our Bearing Drift Virtue Signalers! Poor migrants are the future Welfare Democrat party voters. For generations…

Amazing set of straw men you set up there (in my name), Sport!

The Republicans believe it to be Liberty to suck the equity out of the wages built by American Citizens , then you the taxpayer subsidize their foreign labor, then they cry for reform.
Same old song and dance.

First and only first;
E-Verify (1099 included)
Make it a Federal Felony to hire without a valid work permits.
Expired your fired , individual responsiblity thing.

No Federal imported foreign labor program that does not require the employment to be compliant with State Labor, Employment, Tax and Occupational laws. States rights thing ya know.

If House Republicans continue down this path they will have their hat handed to them in November.
Have fun with the Dems $15.00 minimum wageand more…..

We need to remember a few things: Ben Franklin said that “poverty should never be comfortable” and the US has a lot of jobs “that Americans won’t do”. Why are there ANY jobs Americans won’t do? Well, it’s more lucrative to be on government subsidy. Something is really wrong here.

Where were our standard bearers on this?

Easy solution. No welfare for 5 years for anyone from another country. Many of these immigrants aren’t refugees but see that welfare is paved with gold from the american taxpayers.

Sounds an awful lot like the Trump family there.