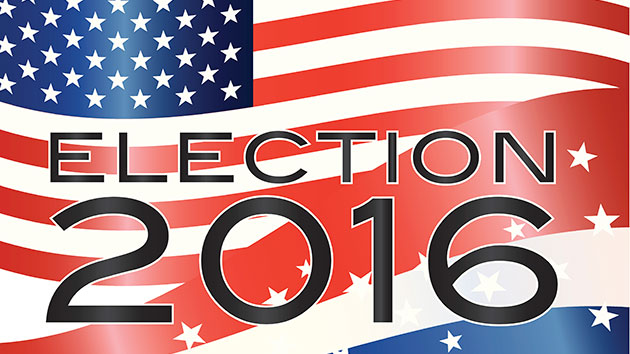 How a Presidential Primary Disenfranchises Virginians

As Spring rolls into Summer, Virginia Republicans find themselves debating yet again what nominating procedure to use on the state level.Â [read_more]

As the sides line up and offer their thoughts, we hear a lot of the same arguments we hear every year.

Excluding theÂ brief discussion about a state convention for president in 2012, this discussion is radically different than any other convention v. primary debate. You see, at the end of the day that we vote, regardless of the form, we will not have a nominee. Â What State Central will decide next week is the process by which Virginia’s delegates to the national convention will be allotted to certain presidential candidate(s) for the vote at the Republican National Convention.

Some may remember the long protracted battle between Hillary Clinton and Barack Obama in 2008. It was a battle over delegates to the national convention. The term “super delegates” became part of the political lexicon as there was the possibility a group of Democrat convention delegates may enable the contest to be determined at the national convention. Â In 2008 and 2012 Republican campaigns were analyzing delegate counts, and McCain and Romney became the defacto nominees when they secured enough delegates to win the convention on the first ballot. Â Ultimately we are determining the process for assigning delegatesÂ not nominating methods which makes this discussion of primaries v. conventions a very different one. Â Republicans are having a convention to determine their presidential nominee just like the Democrats and just like both parties have done for decades. Virginians have to decide the process by which each/a campaign is assigned delegates.

As much as primaries are heralded as the great democratic process, in Virginia for the presidential contest, they have been the opposite. Â Let’s look at the results of the last two VA presidential primaries. 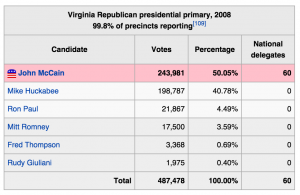 What is democratic about these results?Â Sure a lot of people are able to participate, but their votes are ignored and don’t matter. Â In 2008, if you were part of the 49.95% of Virginians who voted for someone besides John McCain, you had 0 people represent you when the official vote for president was cast.

The Virginia primary rules become even more troublesome in this particular presidential contest. Â In 2016, there will be over 15 candidates for the Republican nomination. Â With the ups and downs of the 2012 campaign, campaigns are going to be much less likely to drop out in 2016. Â This creates one of the most likely scenarios for a brokered conventions in recent politics. Even if the nomination is not decided at the convention, delegate counts are going to be important throughout the spring in determining your favorite candidates strategy.

Due to easing up the ballot access requirements, we will likely see most of the candidatesÂ on the ballot in Virginia, assuming we have a primary. Â Current polling shows a top group of five campaigns, Bush, Walker, Cruz, Paul, and Rubio (listed in no particular order), other candidates have significant upside and could easily be in the mix in the Spring as well.

With at least five strong campaigns in Virginia in 2016, something we haven’t had in decades, and the rules for allocating delegates, we could see a number of highly undemocratic results. A campaign could win all 49 Virginia delegates with 35% around the state. Â We could also see different campaigns do well in different congressional districts, but the 13 statewide delegates could be won with around 35%. Do we really want to see a campaign, that the majority of Virginia Republicans may oppose, winning all of Virginia’s delegates?

It is highly likely that a primary will lead to a very unfair and undemocratic allocation of Â Virginia’s delegates in 2016 under current rules.

In Virginia in 2016, its the rules, not the nominating method that matters because it is all about assigning delegates to campaigns.

Whether we used preference balloting, a run off, or a different way of assigning delegates, a primary could lead to a much more fair outcome. It is also true that a convention could lead to an outcome that would be just as illogical as the primary scenarios above. Â Activists haven’t seen a draft or framework of the rules for assigning delegates for the proposed convention.

While Virginia Republicans are brushing off the regular arguments about conventions and primaries, this year is different. Since we are selecting delegates, the rules are crucial. Let’s push those in power to create a process where delegates are assigned in a manner proportional to the votes that are cast. If a convention is chosen, hopefully as much time will be spent in creating a fair set of rules as in debating the method of nomination.

P.S. Anyone remember the word “slating?” Whether in a primary or convention, Virginia gives all its delegates to one campaign, we will have just slated all our delegates for one candidate.

sigh. my fear is that our party will have a convention. The demographics in our state are changing, making it harder for Republicans to win statewide. But the powers that be on SCC want to double-down on the exclusionary tactic of a convention instead of trying to convert more voters in these new & changing demographics.

I disagree that proportional delegates will do Virginia any good. “Winner take all” would make Virginia much more attractive in this situation where we have a number of equally-qualified candidates. If candidates are polling at 20% and will receive a proportional amount of delegates, then why put extra effort into it? Tell candidates that the winner takes all and their interest will skyrocket. Given the large number of equally qualified candidates I think a winner-take-all brokered convention is the only way to go this cycle and should be adopted by all the states and not just Virginian. If we move forward with everything being proportional, we are nearly guaranteed to have a brokered national convention because nobody will get near the majority.

Your argument would make a lot of sense if it wasn’t silently predicated on the idea that Virginia should have a say in the nomination of the president and that having a convention in June would most likely preclude that from happening because the race will already be settled. I am in no way convinced that a State Convention in March is possible to pull off logistically. I’m also not convinced that we even have a location in the state big enough to pull off a real live contested convention. This whole debate is a matter of tactics versus logistics. A great case can be made tactically for why a convention would be better, but the logistics just are not there in any scenario to back those tactics up.

Yes, the rules are crucial, which is why I don’t get why you didn’t look them up before you wrote this:

RULE NO. 16 – Election, Selection, Allocation, or Binding of Delegates and Alternate Delegates

Willie, this is in the RNC Party Plan. If we hold our primary on March 1, as scheduled, delegates have to be allocated proportionally.

This actually makes Virginia a very attractive state to play in, because even if you don’t win, you can still pick up pledged delegates. The convention system doesn’t allow this if we require an instant run-off or any of those other systems that force compromise to get to a final result.

Sure, its just that the definition of proportional matters as well, and the way we do proportional delegate allocation practically defaults to winner take all.

“What is democratic about these results? Sure a lot of people are able to participate, but their votes are ignored and donâ€™t matter.” Couldn’t you say the same for a general election with that logic?

In the sense that Republican votes in NJ and Democrat votes in TX have little value in a presidential race, yes. Which begs the question was the system ever meant to be truly democratic?

This is just ignorant

That didn’t add anything to what Willie said or detract from it because you didn’t back up that comment with any reasons why you believe it is so.